The rains had rested and it was a clear sky with a few scattered clouds. This meant that the day temperature would be in its 30s so we had a heavy breakfast and set out maneuvering through the narrow streets populated by cattle and people and other 2/3/4 vehicles, to the magnificent Mehrangarh Fort.

“Mehrangarh Fort stands a hundred feet in splendour on a perpendicular cliff, four hundred feet above the sky line of Jodhpur. Burnished red sand stone, imposing, invincible and yet with a strange haunting beauty that beckons . Much has been written about the Citadel of the Sun, for truly, it is one of the most impressive in all Rajasthan. So colossal are its proportions that Rudyard Kipling called it “ the work of giants”. Today, it is acknowledged as the finest living example of a Hindu fortress.
Jodha’s fortress was 'Chao Burja' – a fort with four Bastions. The extremities of the original fortress fall within the limit of the second gate today. Of Jodha’s time itself, very little remains, the fort expanded beyond his outer gates within fifty years of his death but the spot where this gate stood is known as “ Rao Jodhaji Ka Falsa” ( Jodha’s outer limit of the boundary). In its Janampatri the fort is named Chintamani, after the Mythological gem worn by lord Ram which supposedly frees the owner of all worldly worry. Chintamani gave way to Mordhwaj, the flag of the peocock, presumably because the forts outer parameter suggests the fan like tail of a dancing peacock, It is at some point after this that the name Mehrangarh began to appear in chronicles and poems. “Mehr” is a Rajasthani word for the sun and it is not at all unlikely that the Suryavanshi Rathores would name their first citadel in their mythological ancestor’s honour.”
Above sourced from http://www.mehrangarh.org/ 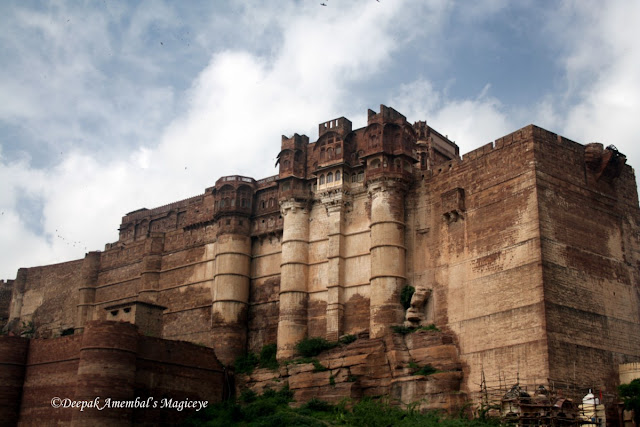 It is immense in every sense of the word.
Within the fort, several brilliantly crafted and decorated palaces are found.
Moti Mahal - The Pearl Palace
Built by Raja Sur Singh (1595–1619), the Moti Mahal is the largest of the Mehrangarh Museum's period rooms. Sur Singh's Moti Mahal has five alcoves leading onto hidden balconies; it is believed they were built for his five queens to listen in on court proceeding. 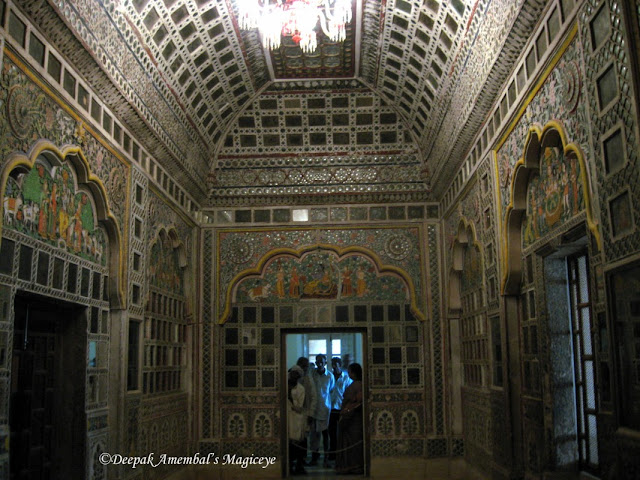 Sheesha Mahal - The Hall Of Mirrors
It is a fine example of a typical Rajput Sheesh Mahal. The mirror-work includes large, regular pieces, rather than an intricate mosaic of tiny fragments; another thing is the superimposition over the mirror-work of brightly painted religious figures made in plaster. 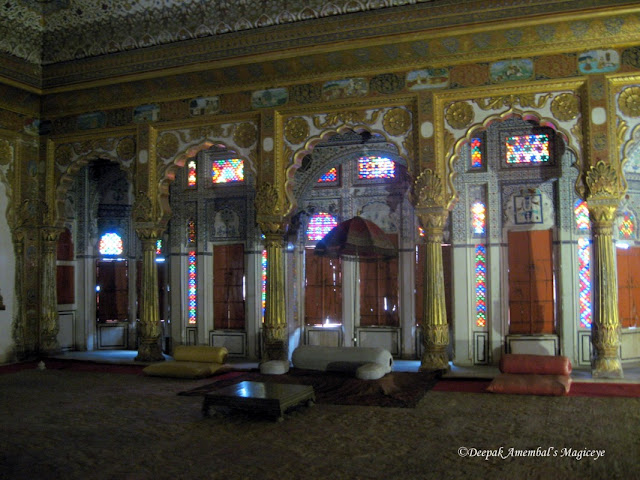 Phool Mahal - The Palace Of Flowers
The Phool Mahal was created by Maharaja Abhaya Singh (1724–1749). The grandest of Mehrangarh's period rooms the Phool Mahal was in all likelihood a private and exclusive chamber of pleasure; dancing girls once swooned in exhaustion here under a ceiling rich in gold filigree. 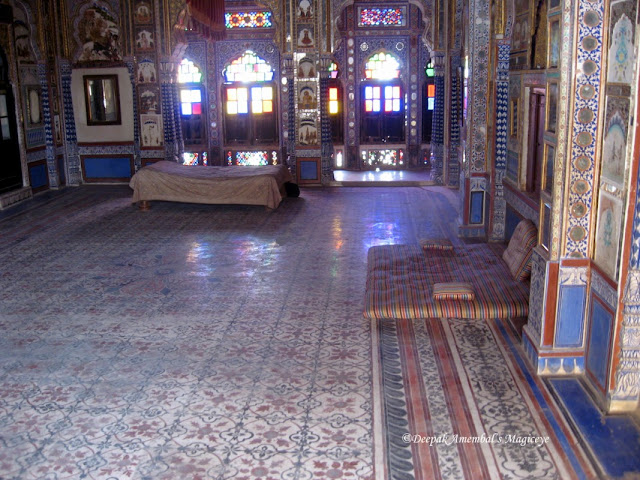 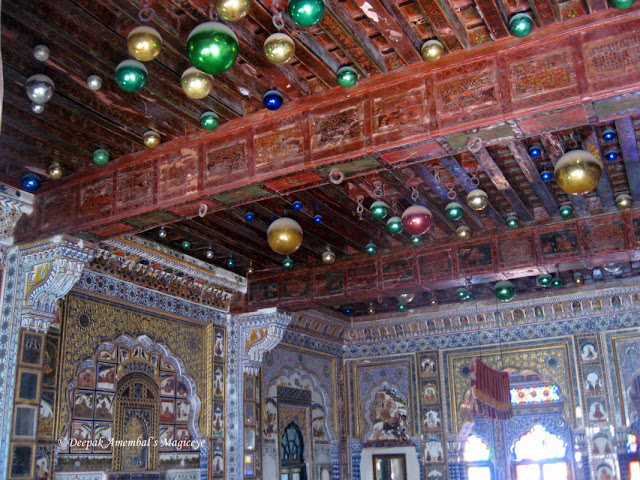 ceiling, testifying to the modern age which arrived with the British.
They have an excellent museum there. 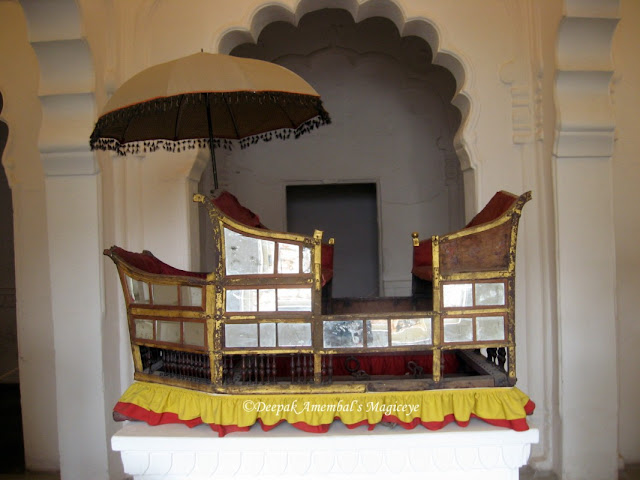 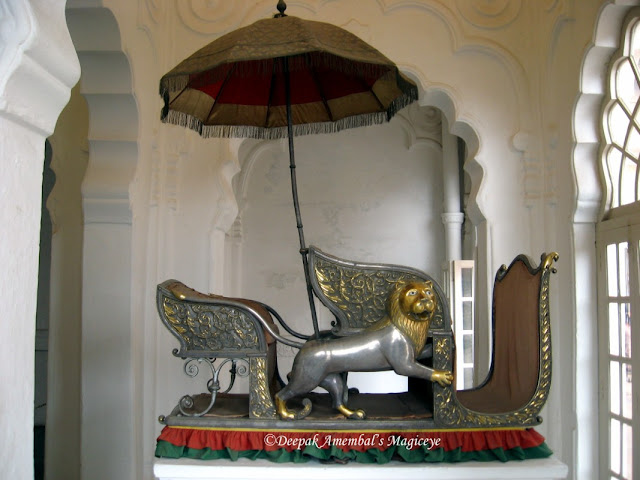 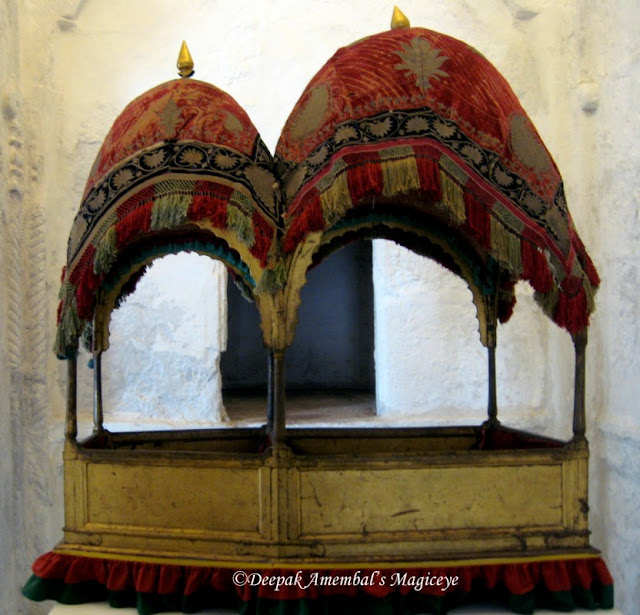 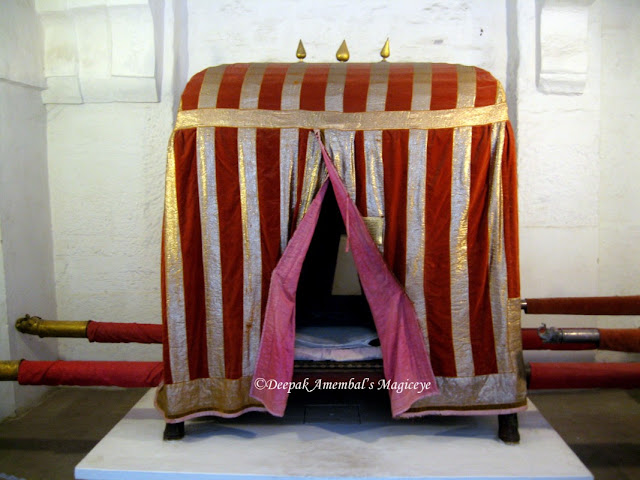 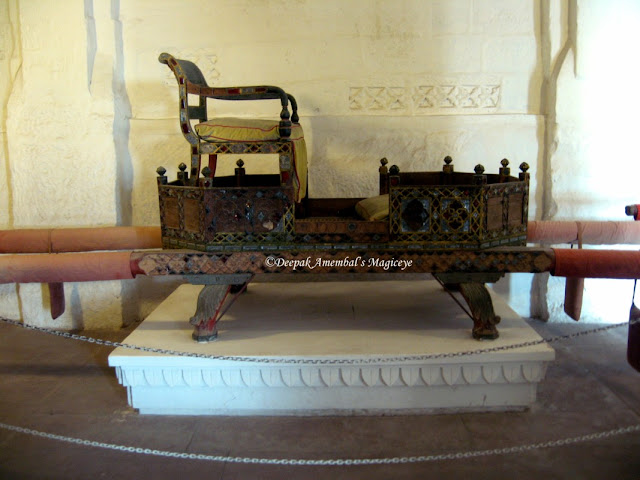 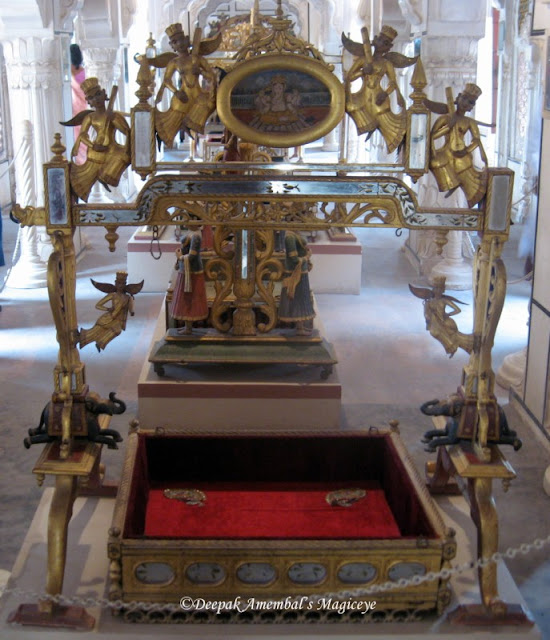 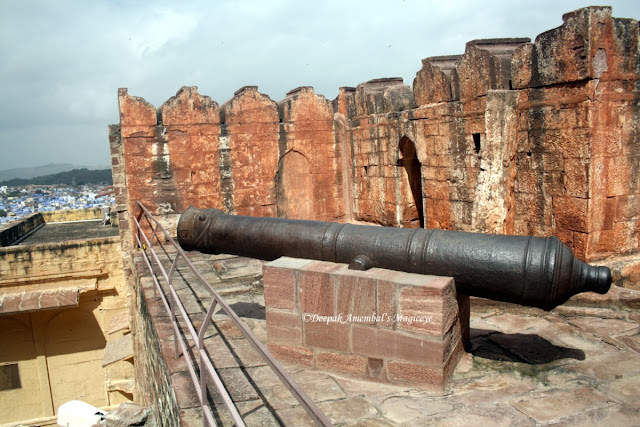 Kilkila) but also offer a breath-taking view of the city. 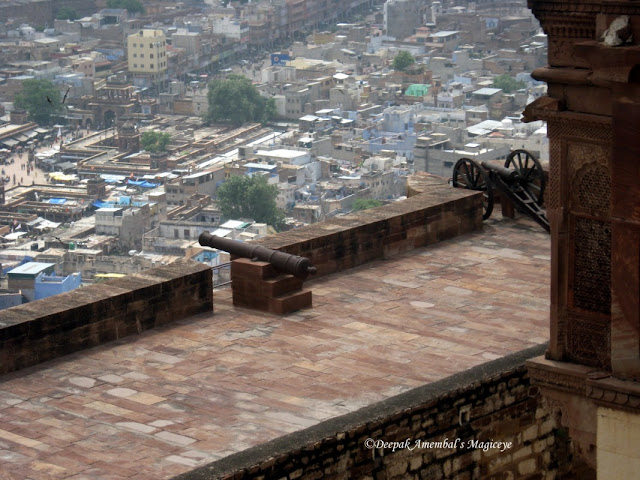 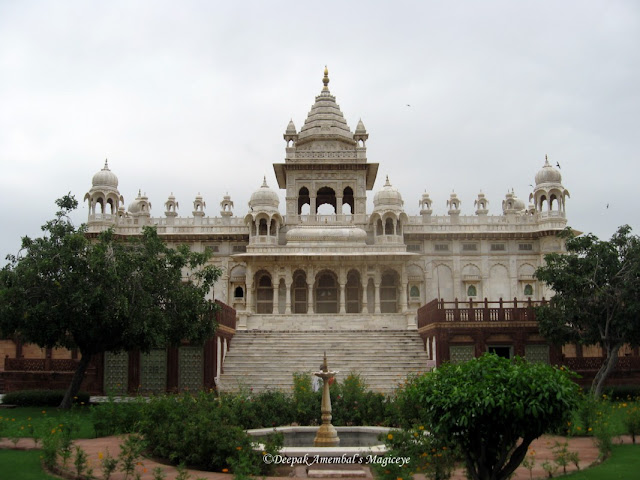 family members of the royal family. This too is very impressive and well maintained.
It was time for lunch so returned to the hotel, had lunch and then drove to the fabulous Umaid Bhavan which 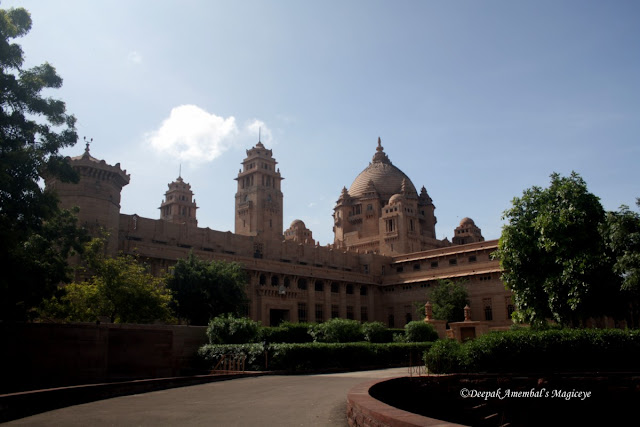 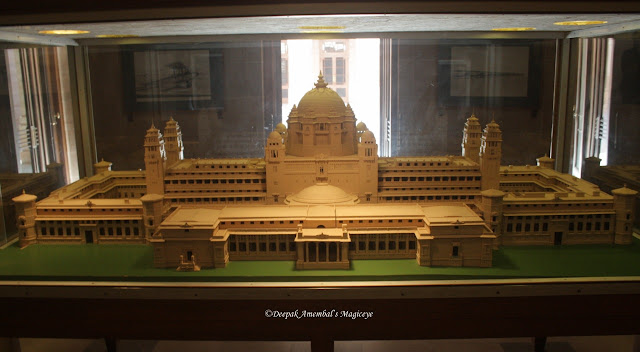 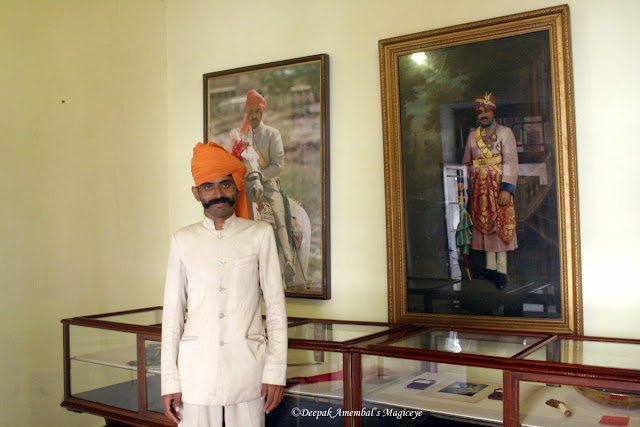 Maharajah. Unfortunately all the vintage cars were behind glass walls and had to photograph holding the 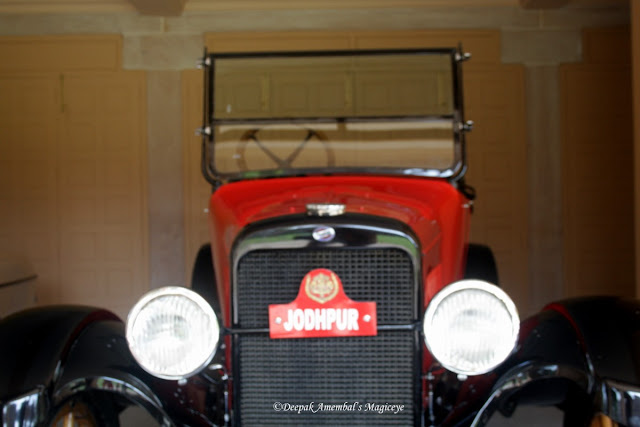 camera close tothe glass to avoid any refelction resulting in only close ups.
For dinner we wanted to gorge on some typical Rajasthani street food which apparently was available in the 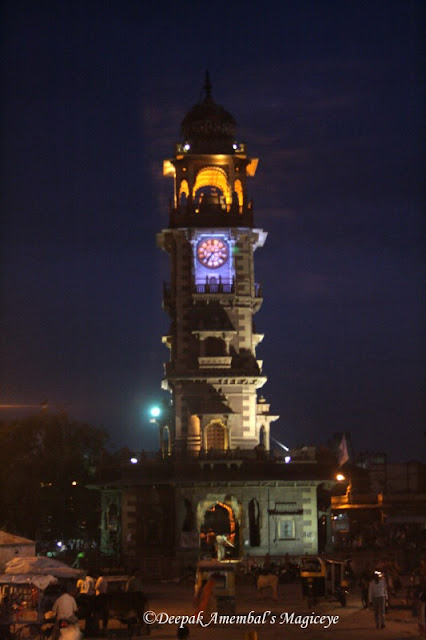 precincts of Ghantaghar (clock tower). There is a bustling market there. 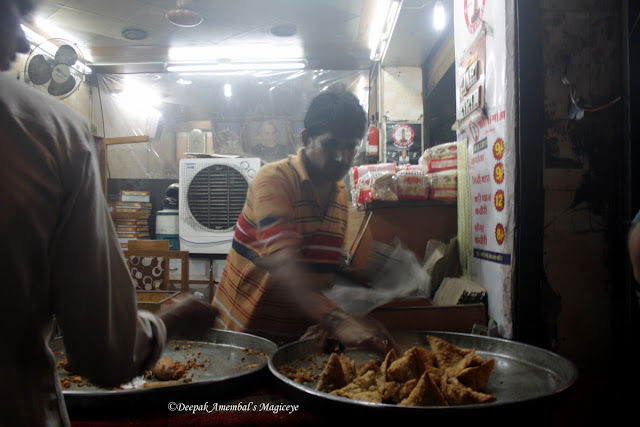 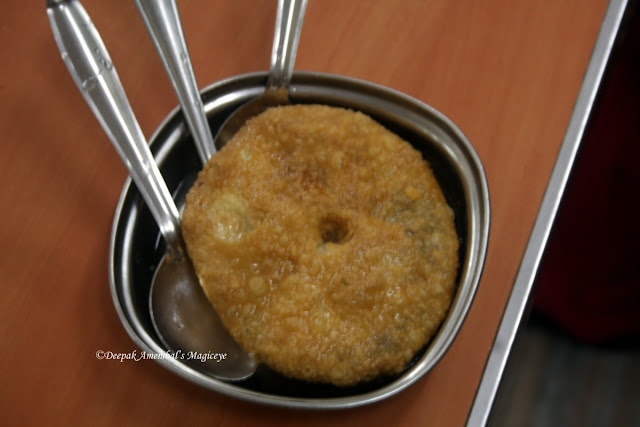 Makhaniya Lassi. This filled us and was our dinner. 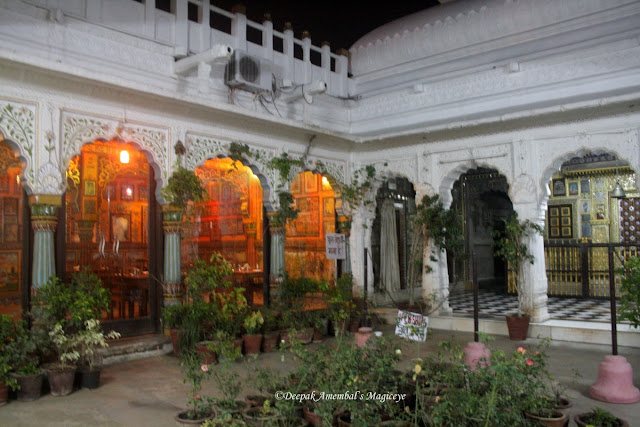 While roaming around the area we found a unique restaurant (Nirvana cafe) sharing premises with the Teejamata mandir! We dropped in the cafe for a coffee. We were the only customers there! The prices were very reasonable and though we just had coffee we have heard that they serve value for money food too.
Tired and sleepy we headed back to our hotel for a good night’s sleep as we had to move on to Jaisalmer next morning.