Hotel Jorchung was like a homestay where the guest was treated like a family member. When they realised that we had not had our lunch they cooked up a simple meal for us so that we could eat and rest for the day. 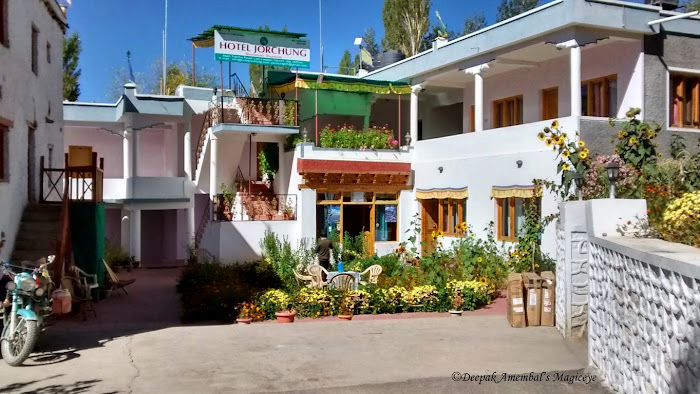 We sat with them and planned out an itinerary for the duration of out stay there. It was decided that we would ride only to Khardungla and back and to the rest of the places we would cab it out. We had to drop our plans of riding to Turtuk due bad weather resulting in landslides enroute hence we would just ride to Khardungla and back. 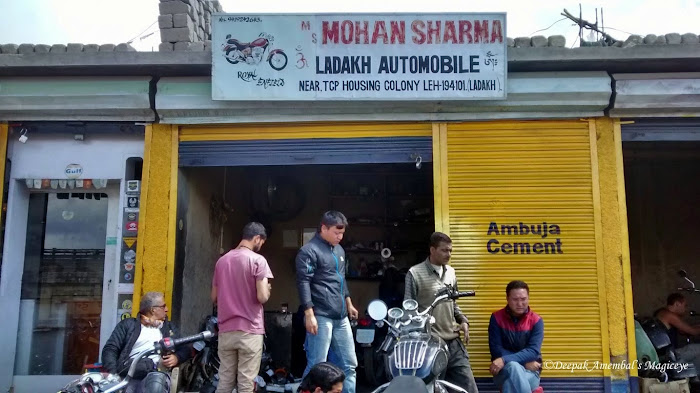 Next morning was time to show some love to our bikes and we were advised to visit Mohan in Leh who would shower all needed affection on our rides. So after the mandatory check up and top up, got them washed and sparkling clean and ready for the rest of the journey.
Just as we were wrapping up our visit to Mohan, got a call from the Taxi driver saying he would be at the Hotel to pick us up shortly. So off we went and soon we were seated in the SUV for a drive to the Hemis and Thiksay monasteries. 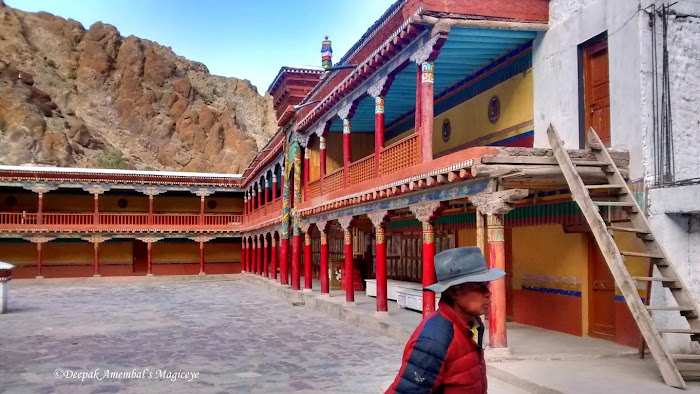 Ref Wikipedia: Hemis Monastery is a Tibetan Buddhist monastery (gompa) of the Drukpa Lineage, located in Hemis, Ladakh, India. Hemis Monastery existed before the 11th century. Naropa, the pupil of the yogi Tilopa, and teacher of the translator Marpa is connected with this monastery. A translation was made by A. Grünwedel of Naropa's biography that was found in Hemis monastery. Situated 45 km from Leh, the monastery was re-established in 1672 by the Ladakhi king Sengge Namgyal. The annual Hemis festival honoring Padmasambhava is held here in early June. 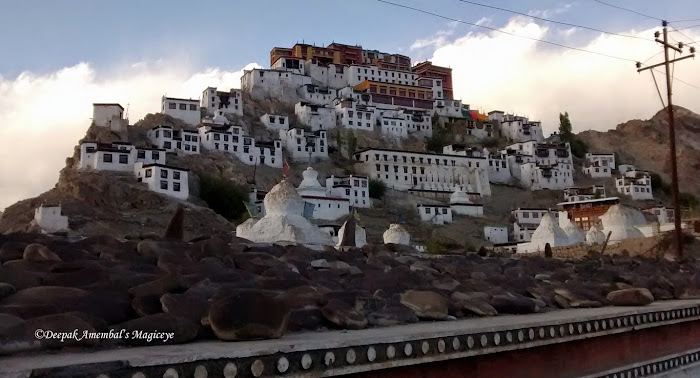 Thiksay Gompa or Thiksay Monastery is affiliated with the Gelug sect of Tibetan Buddhism. It is located on top of a hill approximately 19 kilometres east of Leh in Ladakh. It is noted for its resemblance to the Potala Palace in Lhasa, Tibet and is the largest gompa in central Ladakh, notably containing a separate set of buildings for female renunciates that has been the source of significant recent building and reorganisation. It was founded in the mid 15th century.
The monastery is located at an altitude of 3,600 metres (11,800 ft) in the Indus Valley. It is a twelve-storey complex and houses many items of Buddhist art such as stupas, statues, thangkas, wall paintings and swords. One of the main points of interest is the Maitreya Temple installed to 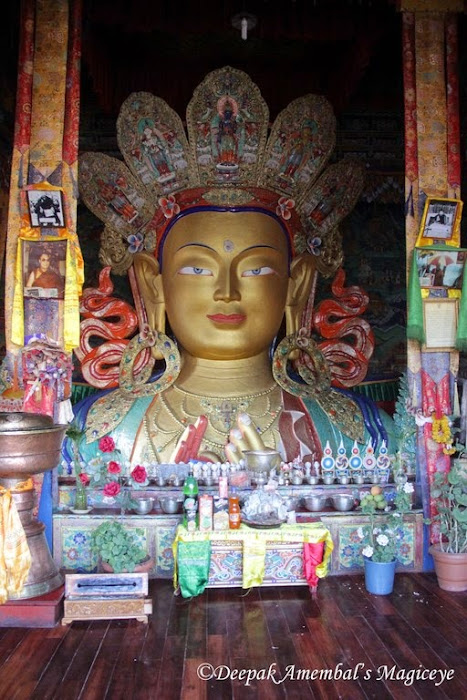 commemorate the visit of the 14th Dalai Lama to this monastery in 1970; it contains a 15 metres (49 ft) high statue of Maitreya, the largest such statue in Ladakh, covering two stories of the building.
Had some amazing lunch in the restaurant at the foot of the Thiksay monastery.
We returned feeling blessed and ready for the long trip to Pangong Tso the large salt water lake that stretches right into China. The ambiance there was heavenly. A perfect spot to sit and introspect. 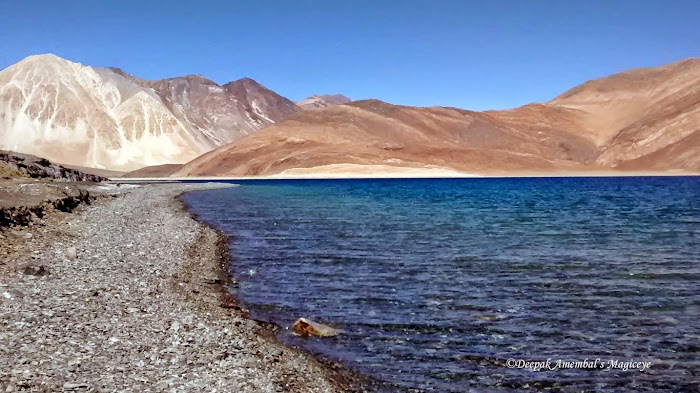 Ref Wikipedia: Pangong Tso, Tibetan for "long, narrow, enchanted lake", also referred to as Pangong Lake, is an endorheic lake in the Himalayas situated at a height of about 4,350 m (14,270 ft). It is 134 km (83 mi) long and extends from India to Tibet. Approximately 60% of the length of the lake lies in Tibet. The lake is 5 km (3.1 mi) wide at its broadest point. All together it covers 604 km2. During winter the lake freezes completely, despite being saline water. It is not part of Indus river basin area and geographically a separate land locked river basin. 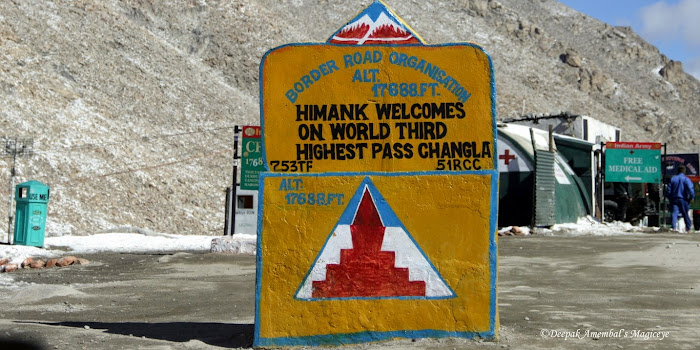 On the way we crossed Changla pass (The Chang La is a high mountain pass in Ladakh, India. It is the third highest motorable road in the world. The Chang La is on the route to Pangong Lake from Leh. The name literally means "Pass towards the South" or "Pass in the South".)
Next morning was reserved for our ride to Khardungla pass. We rode there and back but frankly no feeling of exhilaration.
Here is a short time lapse video of our ride from SouthPullu to Khardungla followed by a picture of us at the milestone. 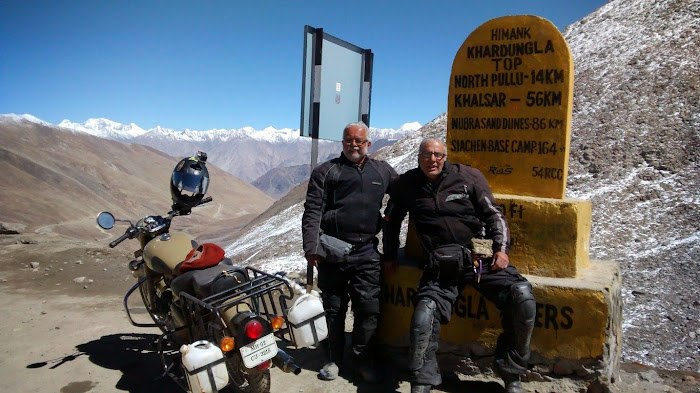 Ref Wikipedia: The Khardungla pass on the Ladakh Range lies north of Leh and is the gateway to the Shyok and Nubra valleys. The Siachen Glacier lies part way up the latter valley. Built in 1976, it was opened to public motor vehicles in 1988 and has since seen many automobile, motorbike and mountain biking expeditions. Maintained by the Border Roads Organisation, the pass is strategically important to India as it is used to carry supplies to the Siachen Glacier.
The elevation of Khardung La is 5,359 m (17,582 ft).  Local summit signs and dozens of stores selling shirts in Leh incorrectly claim that its elevation is in the vicinity of 5,602 m (18,379 ft) metres and that it is the world's highest motorable pass.
To me it seemed like just another ride in Ladakh. On our return, Aditya bought a T-shirt from the only shop in South Pullu and to his bad luck forgot his pouch containing all his valuables. He realised the loss only after reaching the Hotel and as soon as the staff at the Hotel learnt of it they put us at ease and told us not to worry as they were confident that we would get it back. A taxi was hired and Aditya went in it to the shop and retrieved his pouch intact. The shop owner refused to accept any gratification so Aditya bought tea for all present! A reassuring act of humanity in the otherwise desolate region.
In the evening we visited the beautifully pristine Shanti stupa. 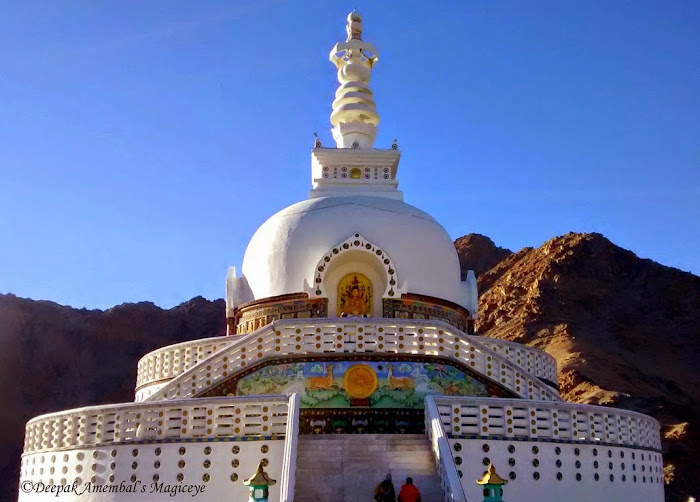 Ref Wikipedia: Shanti Stupa is a Buddhist white-domed stupa (chorten) on a hilltop in Chanspa, Leh district, Ladakh, in the north Indian state of Jammu and Kashmir. It was built in 1991 by Japanese Buddhist Bhikshu, Gyomyo Nakamura and part of the Peace Pagoda mission. The Shanti Stupa holds the relics of the Buddha at its base, enshrined by the 14th Dalai Lama. The stupa has become a tourist attraction not only due to its religious significance but also due to its location which provides panoramic views of the surrounding landscape. 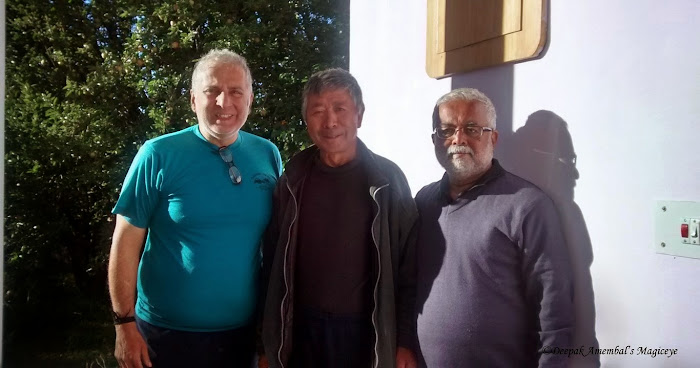 The perfect end to our stay in Leh. Next morning after a couple of photo ops with Mr.Sonam, the genial owner of Hotel Jorchung, we set out for Sarchu.