Udayagiri and Sanchi in Madhya Pradesh

On the way to Sanchi from Bhopal we visited the famous Udaygiri caves. The Udayagiri Caves are an early Hindu ritual site located near Vidisha in the state of Madhya Pradesh. They were extensively carved and reworked under the command of Chandragupta II, Emperor of the Gupta Empire, in the late 4th and 5th century C. 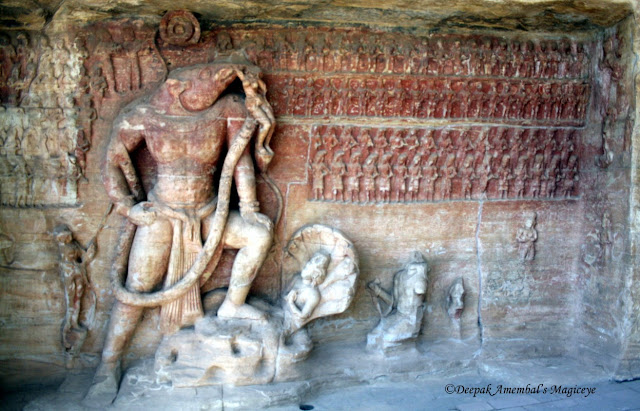 The most famous sculpture is the monumental figure of Viṣhṇu in his incarnation as the boar-headed Varaha in Cave 5. 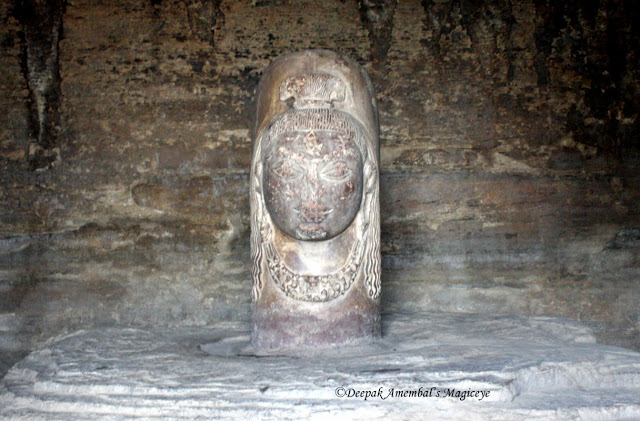 Cave 4 has a unique Shiva linga. The hair is tied up into a topknot with long locks cascading down each side. The arrangement of the hair depicts the story of how Shiva broke the fall of the River Gaṅga as she came down from heaven. 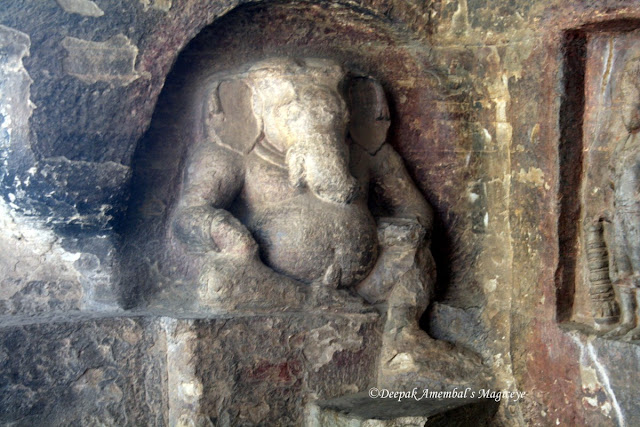 Of special note also is the figure of seated Gaṇeśa, being the oldest datable Gaṇesha in India, to the left of the entrance to cave 6. 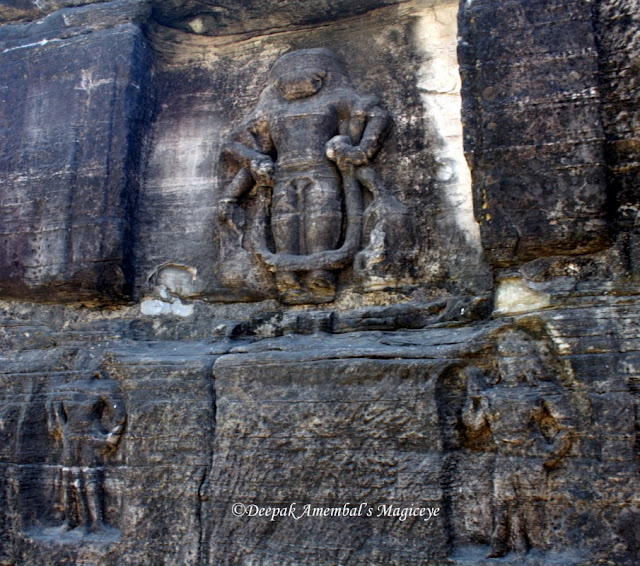 Cave 12 consists of a niche containing a standing figure of Narasimha, Vishṇu in his 'Lion-man' incarnation. Below on either side are two small standing attendant figures. 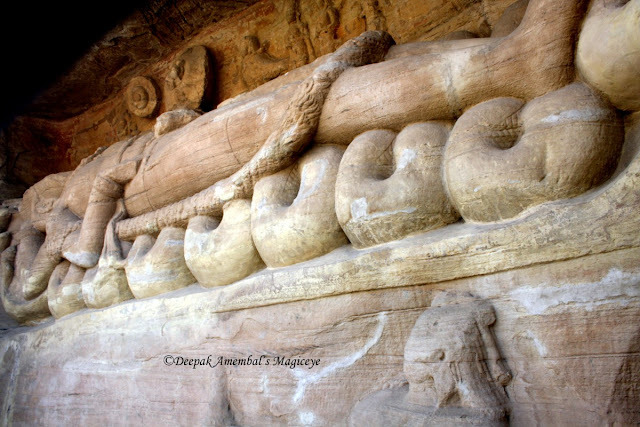 Cave 13 contains a large figure of Narayaṇa, the recumbent figure of Vishṇu resting. Beside the image of Narayaṇa is a kneeling devotee, and it is believed that this figure is a depiction of Chandragupta II himself, symbolising his devotion to Vishṇu. 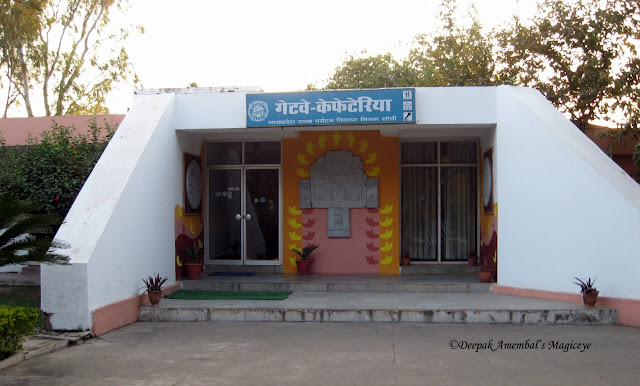 had a beautiful ambiance.
Post lunch we drove down to the Sanchi stupa. Sanchi is the location of several Buddhist monuments dating
from the 3rd century BC to the 12th C and is one of the important places of Buddhist pilgrimage. It takes about an hour and a half for a non-research visit of the site. Photography is allowed and audio guides are available.
Ref Wiki :-

The 'Great Stupa' at Sanchi is the oldest stone structure in India and was originally commissioned by the emperor Ashoka the Great in the 3rd century BCE. Its nucleus was a simple hemispherical brick 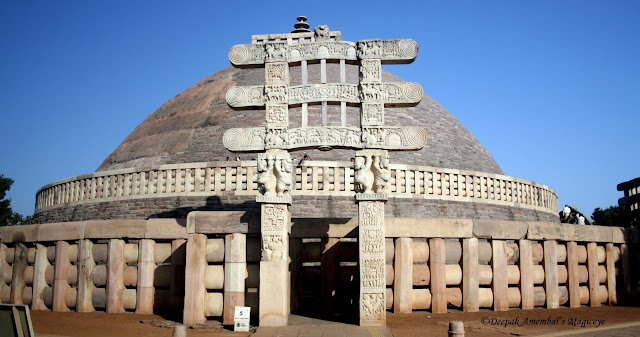 structure built over the relics of the Buddha. It was crowned by the chatra, a parasol-like structure symbolising high rank, which was intended to honour and shelter the relics. It has four profusely 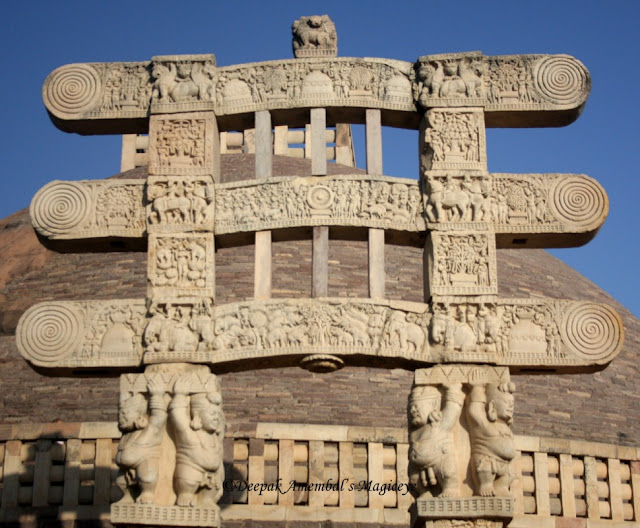 carved ornamental gateways and a balustrade encircling the whole structure. Although made of stone, they were carved and constructed in the manner of wood and the gateways were covered with narrative sculptures. They showed scenes from the life of the Buddha integrated with everyday events that would be familiar to the onlookers and so make it easier for them to understand the Buddhist creed as relevant to their lives. At Sanchi and most other stupas the local population donated money for the embellishment of the stupa to attain spiritual merit. There was no direct royal patronage. Devotees, both men and women, who donated money towards a sculpture would often choose their favourite scene from the life of the Buddha and then have their names inscribed on it. This accounts for the random repetition of particular episodes on the stupa (Dehejia 1992). On these stone carvings the Buddha was never depicted as a human figure. Instead the artists chose to represent him by certain attributes, such as the horse on which he left his father’s home, his footprints, or a canopy under the bodhi tree at the point of his enlightenment. The human body was thought to be too confining for the Buddha.

It was an awe inspiring visit. There were plenty of devotees there but the silence they maintained was 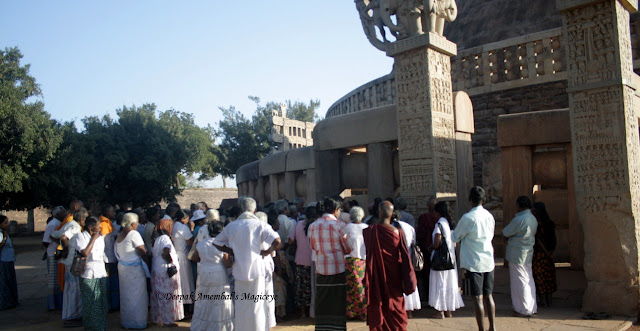 admirable. Only their group leader would gather them under some tree or near one of the gates and talk to them about the importance of the monument and the devotees would whisper in awe. How I wish all our religious centres would maintain the same discipline and respectful silence.

Bhopal the capital of Madhya Pradesh

Everytime the word Bhopal is mentioned, it takes one back to the 3rd  December 1984, when  a Union Carbide Corporation pesticide plant in Bhopal leaked around 32 tons of toxic gases, including methyl isocyanate gas leading to the worst industrial disaster ever. But when we drove into Bhopal a few months back, nearly 28years after the tragic event, we found that people had moved on and there were no obvious 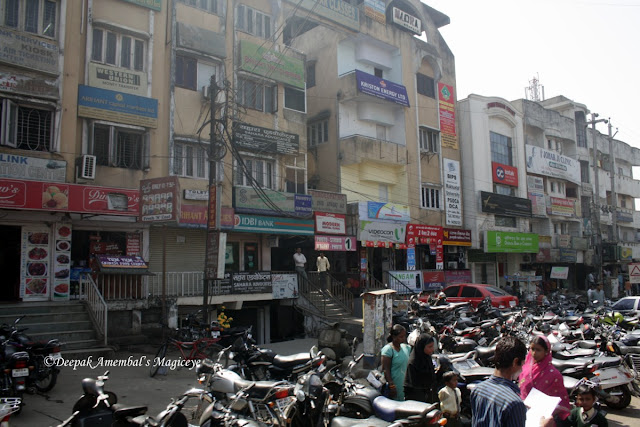 signs of the tragedy. It was as lively as any urban Indian city with manic traffic on narrow roads and crowds jostling at the markets making their way to trade goods.
Bhopal, now the capital of Madhya Pradesh, according to folkolore was founded by Raja Bhoja of the 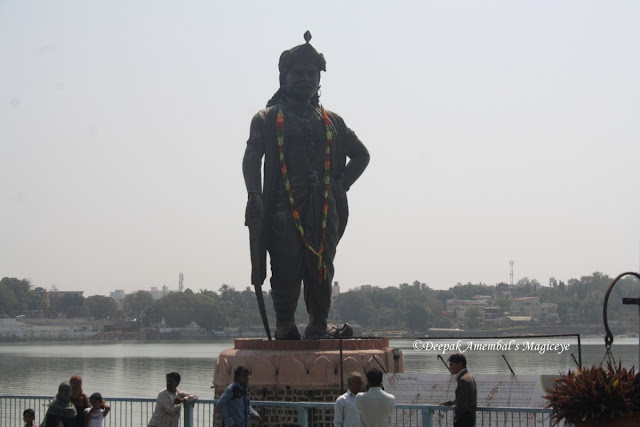 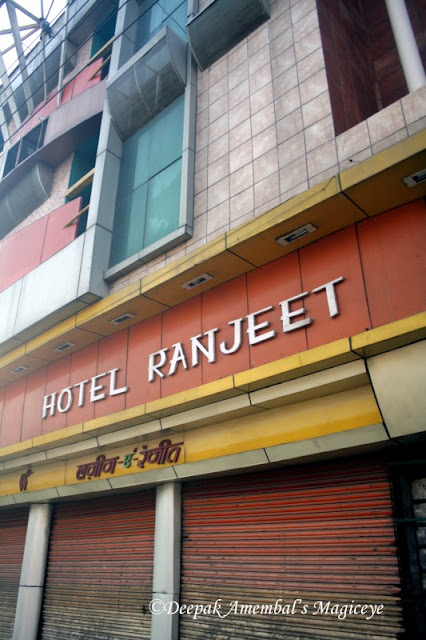 After checking into Hotel Ranjit, had a quick lunch and then set out for the State Museum. This museum 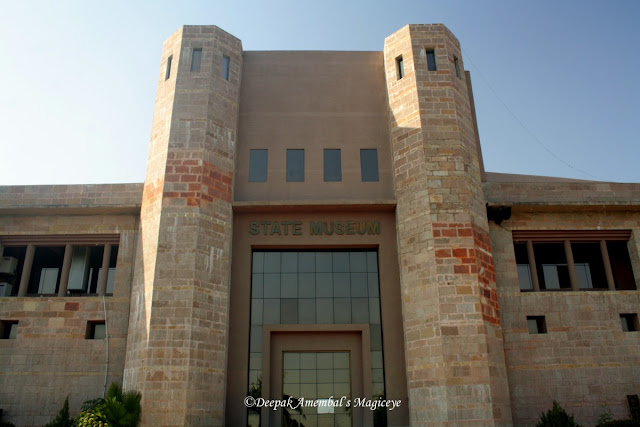 devoted to archaeology, exhibits antiquities like coins, sculptures and terracotta excavated from all the significant sites of the region. Also on view are paintings and handicrafts made by the tribal communities of 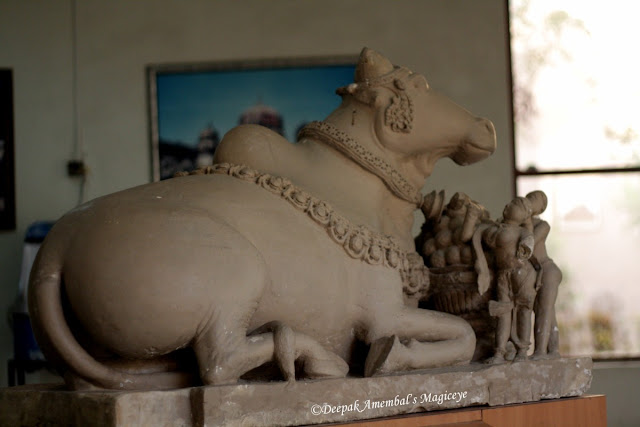 Madhya Pradesh. It sure is a place where one can spend hours marveling at the amazing art of the artisans. The timings of the Museum are 10.00am to 5.00pm and closed on Mondays and Government Holidays. There is no entry fee too, presumably to encourage people to visit and learn.
It was evening by the time we finished with the museum and so headed out to the lake for a cruise by sunset. 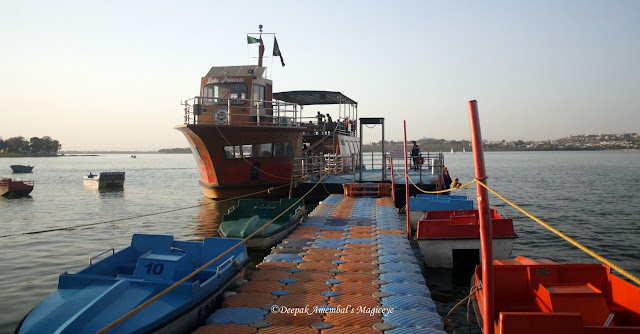 The cruise was magical. 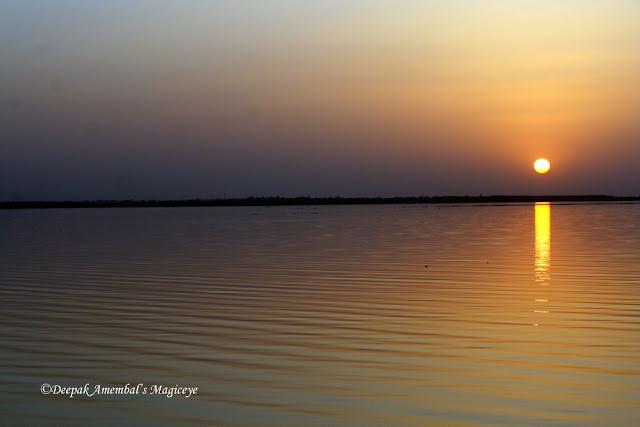 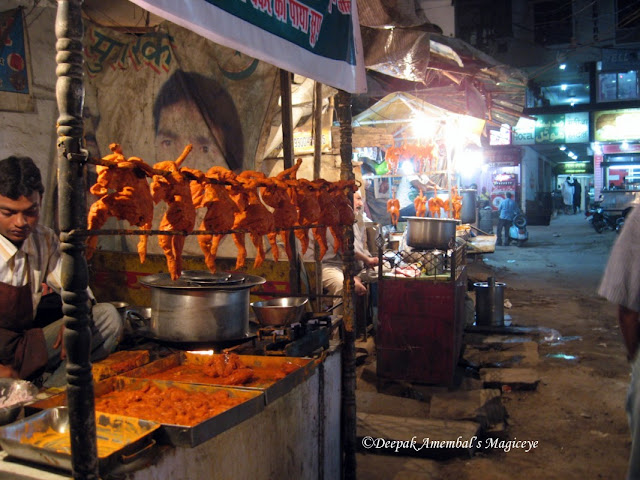 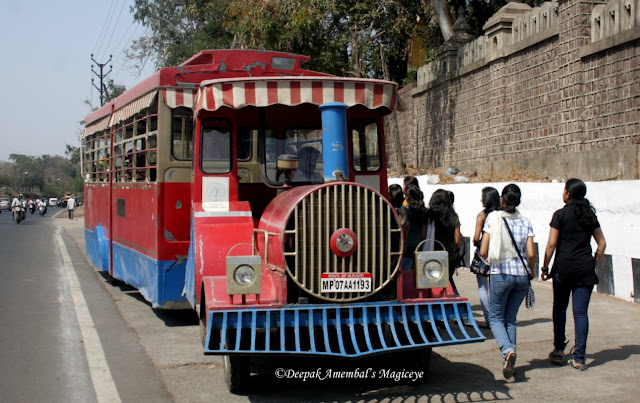 Bhopal has a very quaint city tour transport onto which we hopped on the next day. Our first stop was the 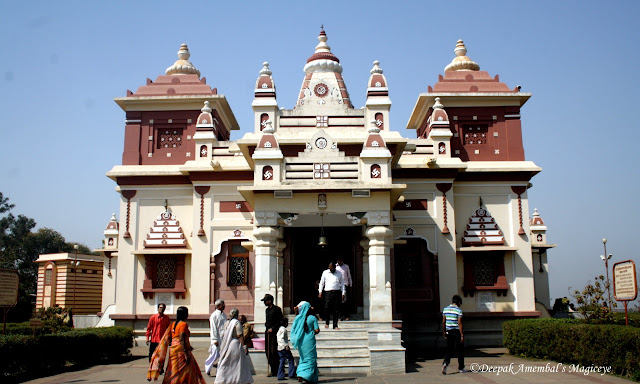 can get some beautiful overviews of Bhopal from the lawns of the temple. 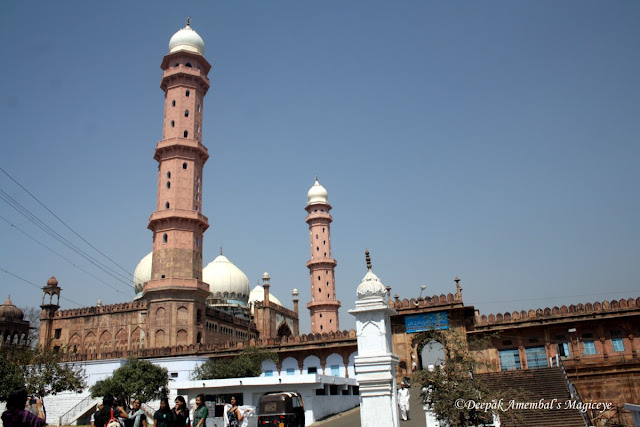 The next stop was the Tajul masjid – the 3rd largest mosque in the world. After a photo session in the masjid we left for the Tribal museum – an amazing place which has tribal art from all over Madhya Pradesh and it 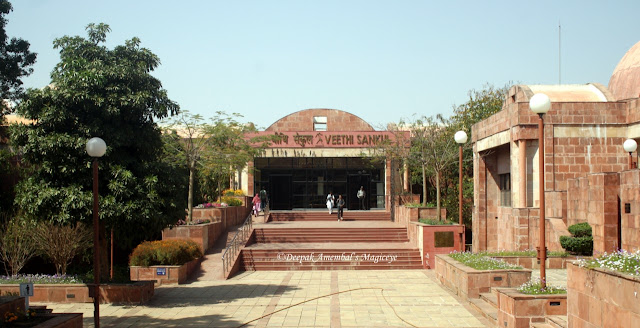 would take you a minimum of three hours to scan through the museum. 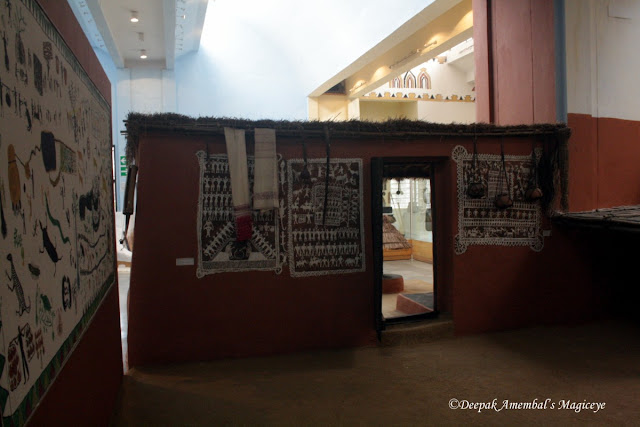 In the evening we went to check out 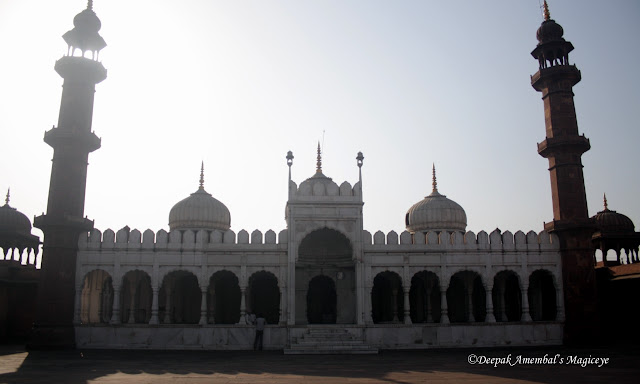 the Moti masjid and 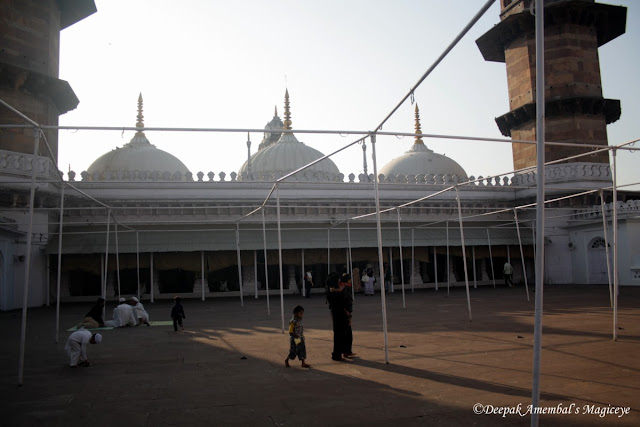 the Jama Masjid which are close to the Chatori gully which beckoned us again for some delicious biryani at Jameel’s and some delicious ‘Khajoor’ which is crisp on the outside and soft within!
Next day we set out for the famous Bhimbetka caves that are around 45kms from the city. Got a licenced 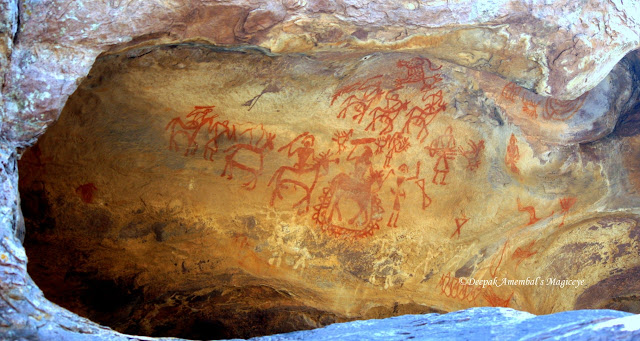 guide at the entrance to the Bhimbetka complex who took us through all the important sites giving us a lowdown on the historic importance of each. It is a World Heritage Site and a number of analyses suggest that at least some of these shelters were inhabited by hominids like homo erectus more than 100,000 years ago. Some of the Stone Age rock paintings found among the Bhimbetka rock shelters are approximately 30,000 years old (Paleolithic Age).
The name Bhimbetka is said to be a derivative of  Bhimbaithka, meaning "sitting place of Bhima". Bhima is the hero-deity renowned for his immense strength, from the epic Mahabharata. It was discovered by V.S.Wakankar in 1957.
It is a marvel that these paintings have not faded even after thousands of years.The oldest paintings are considered to be 30,000 years old, but some of the geometric figures date to as recently as the medieval period.
A cursory visit here too takes around two to three hours.
On the way back to Bhopal we visited the Bhojeshwar temple in Bhojpur. It is a temple dedicated to Lord 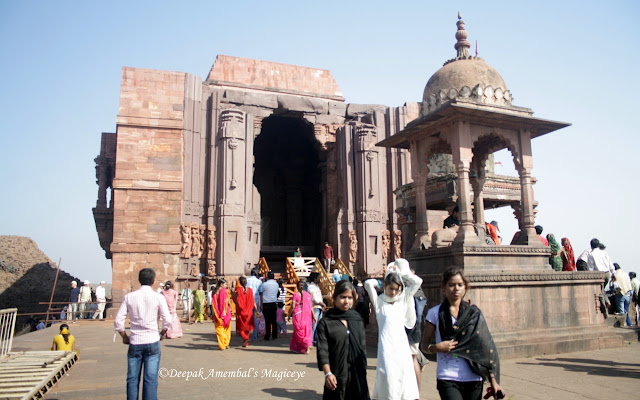 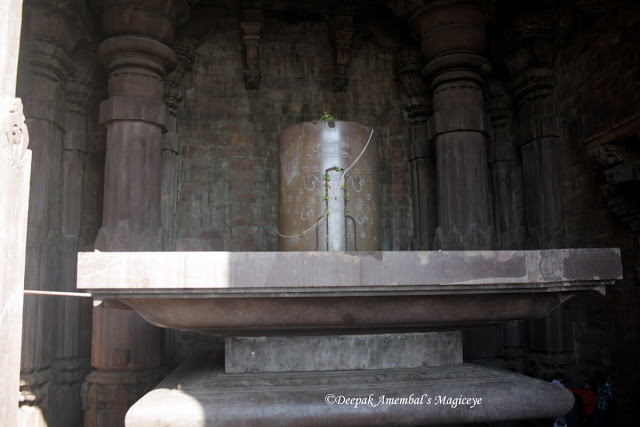 Unfortunately this temple was not completed due to King Bhoja being defeated and killed in a battle by the combined strength of Chalukyas of Kalyani and Gujarat combined with Lakshmi-Karna of the Kalachuri dynasty.
Thus ended our visit to historic Bhopal.

How to get there:
By Rail: Bhopal Railway Station is a major railhead connecting all major cities in India.
By Air: Bhopal Airport, also known as Raja Bhoj Airport, is 15 km away from the heart of the city. It is well connected by domestic airlines from all major cities of India.
By Road: Overnight deluxe buses from Delhi, Gwalior and Jabalpur are available to Bhopal.
Posted by magiceye at 7:49 PM 41 comments: