On our way from Jaipur to Pushkar we had planned a short visit to Ajmer too but the President of our country had similar ideas due to which we were forced to trash our Ajmer visit by the security forces.

Reached Pushkar at forenoon and checked in the beautiful property of Hotel New Park. It was edenic with 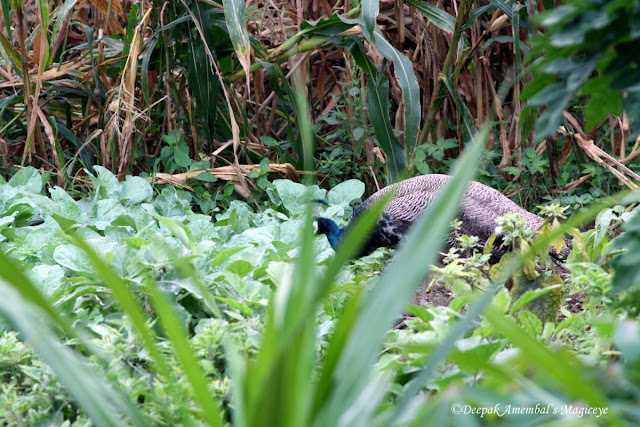 peacocks and other birds flying around in the gardens facing the cottages. Had a quiet lunch and set out in 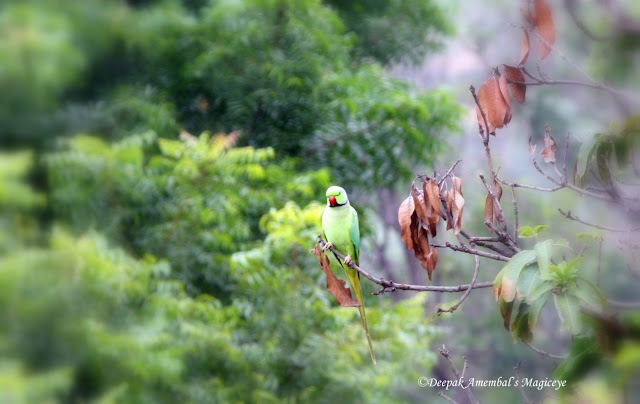 the evening to visit the only Brahma temple in the country which is what Pushkar is famous for apart from the annual camel fair.
Hired a ‘guide on a motorcycle’ who led us through the maze of bylanes to the temple and thrust upon us the local priest to pray for our ancestors. After having resisted guides almost all through the tour we indulged in getting ripped off and hoped that our ancestors in faraway lands were satiated by our prayers and offerings. 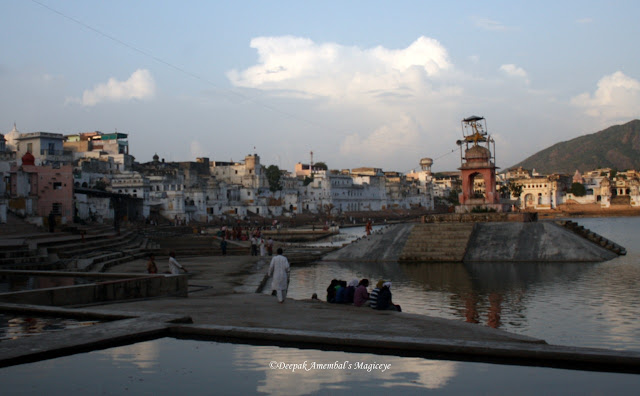 Apparently if we pray at the lake surounded by thousands of temples, our ancestors will be pleased and we were made to do just that! Then we were led to the Brahma temple where fortunately there were no crowds 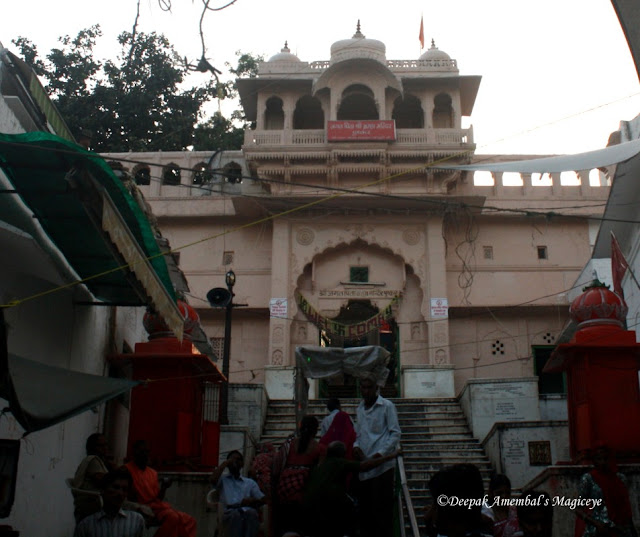 and unfortunately no photography was allowed hence after a brief darshan we were on our way back to the Hotel. 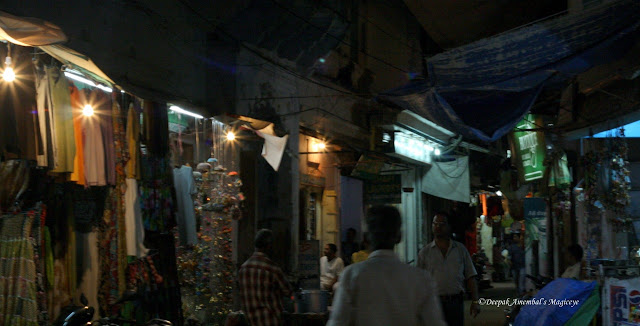 In the evening though we went for a walk round the lake. It was very peaceful despite the crowds. Had a 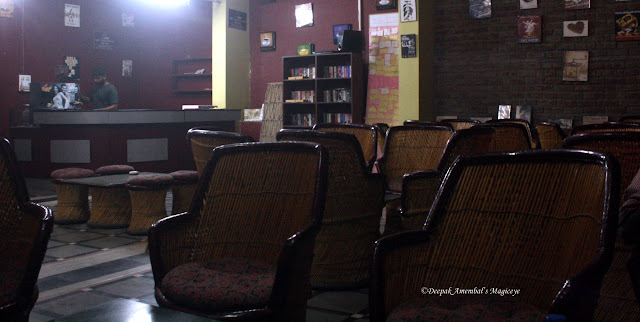 refreshing cup of coffee at ‘Koffe Kulture’, took some pictures and realised that there were more foreigners than Indians out there!
Next morning we set out for Chittorgarh which was a mere 200kms away. We had a booking in RTDC’s property which was in a huge property but had the usual flaws of a Government run institution. Made ourselves as comfortable as possible in the circumstances and after a quick lunch in their restaurant we rested for a while and set out to visit the main attraction – the Chittorgarh Fort. The nice thing was that we could drive all the way up and inside the fort too for a price.

The Chittorgarh fort is considered to be the largest in the country and is spread over 700acres. It was built by Maurya rulers in the 7th century. There are palaces, towers, temples and cenotaphs in the fort. 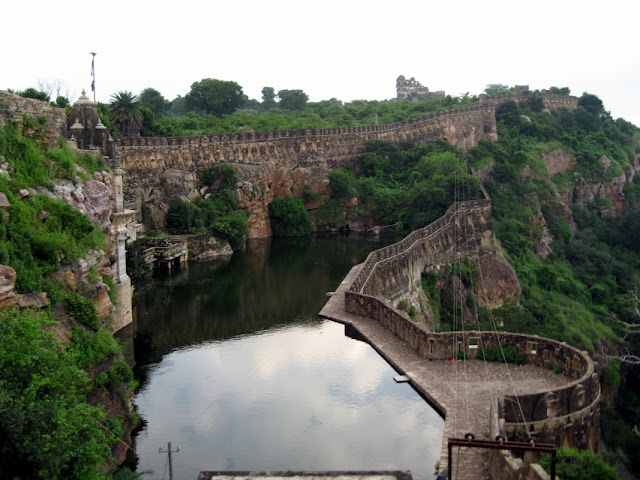 The Gaumukh reservoir is a huge water tank that gets water from a 'Cow's mouth' shaped rock.
The Padmini Palace has an interesting tale. It is in the northern end of the Padmini lake and apparently it was here that Rana Ratan Singh showed a glimpse of the legendary beauty of his wife Padmini to Allaudin Khilji through a mirror who got enamoured with her beauty.

In the middle of the lake there is a three storeyed structure with arched openings and is locally called the Jal Mahal.
Allaudin Khilji who coveted Queen Padmini of Chittaur, invaded the city in 1303 A.D. Queen Padmini and the women of the court sacrificed themselves in a pyre of fire rather than submit to anybody. This supreme sacrifice has been called 'Jauhar' and epitomises the fiery spirit of the Rajputs of the day.
The Vijay Stambh (tower of victory) is the most impressive structure of the Chittorgarh Fort. It was

constructed by Maharana Kumbha to commemorate his victory over Mohammed Khilji in the 15th century. This giant tower is nine-storied and offers a picture-perfect view of the down-town from its balconies. This huge tower extends to the height of 122 feet and width of 47 sq ft at the base. The circular stairs of this tower has 157 steps. This imposing tower took 10 complete years to construct. You can trace sculptures of the Hindu gods on the alcoves of this tower.
They do have a ‘light and sound’ show every evening but we decided to skip it and chose to get back to the Hotel and retire early as we had to leave early next morning on our last leg of the trip to Vadodara and then back home.
This was indeed a magnificent road trip through a very colourful land of Rajasthan!

Reached Jaipur in three hours covering a distance of 183kms from Mandawa. Checked in Hotel Umaid
Bhavan where we had a reservation and after freshening up decided to start exploring the City Palace and Jantar Mantar which are adjacent to each other.
Just rambled through Jantar Mantar trying to learn about how the different structures were used. 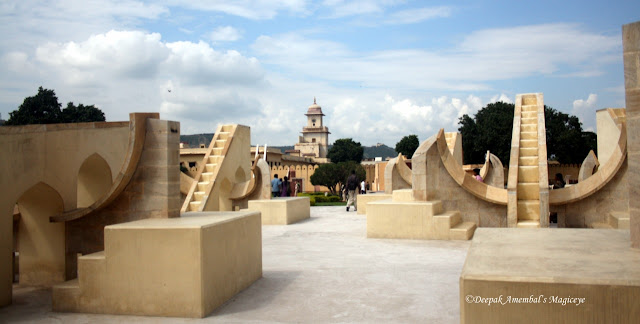 Went on to the City Palace, part of which was converted into a museum. As we entered, the sets of some 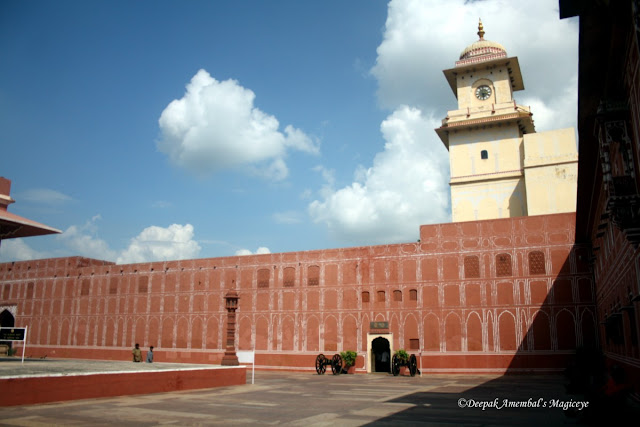 film shoot were being dismantled. Thankfully we had reached after the shoot or else our movement would have been restricted. 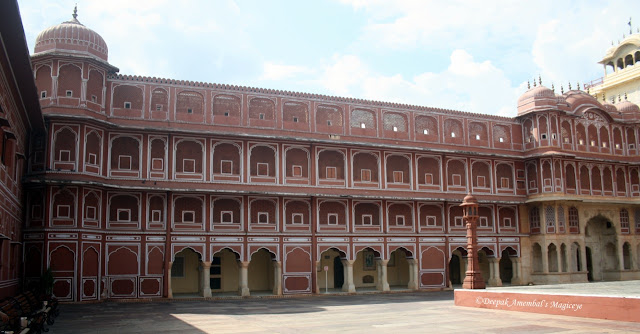 The palace was built between 1729 and 1732, initially by Sawai Jai Singh II, the ruler of Amber. He planned and built the outer walls, and later additions were made by successive rulers right up to the 20th century. The credit for the urban layout of the city and its structures is attributed to two architects namely, Vidyadar Bhattacharya, the chief architect in the royal court and Sir Samuel Swinton Jacob, apart from the Sawai himself who was a keen architectural enthusiast. The architects achieved a fusion of the Shilpa shastra of 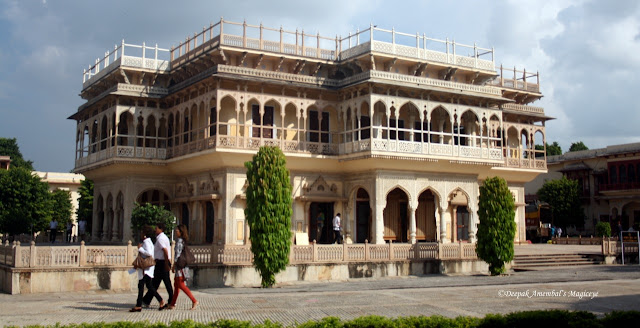 Indian architecture with Rajput, Mughal and European styles of architecture. Following Jaisingh's death in 1744, there were internecine wars among the Rajput kings of the region but cordial relations were maintained with the British Raj. Maharaja Ram Singh sided with the British in the Sepoy Mutiny or Uprising of 1857 and established himself with the Imperial rulers. It is to his credit that the city of Jaipur including all of its monuments (including the City Palace) are stucco painted 'Pink' and since then the city has been called the "Pink City". The change in colour scheme was as an honour of hospitality extended to the Prince of Wales (who later became King Edward VII) on his visit. This colour scheme has since then become a trademark of the Jaipur city.
Next morning we drove upto Amer Fort. On the way we also saw the amazing Hawa Mahal. Did not go 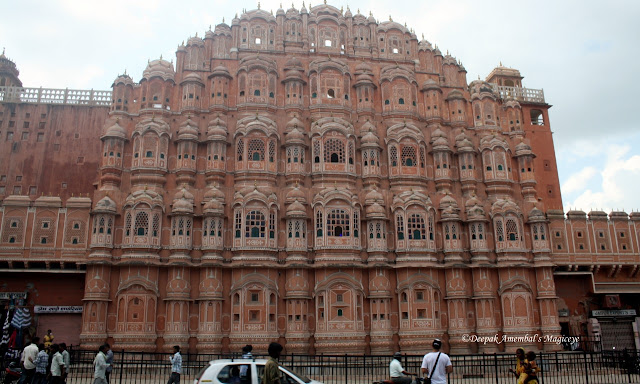 inside the Hawa Mahal as we were told that there is nothing worth seeing inside and all there is to see is on the outside. So clicked a few and proceeded to Amer Fort. 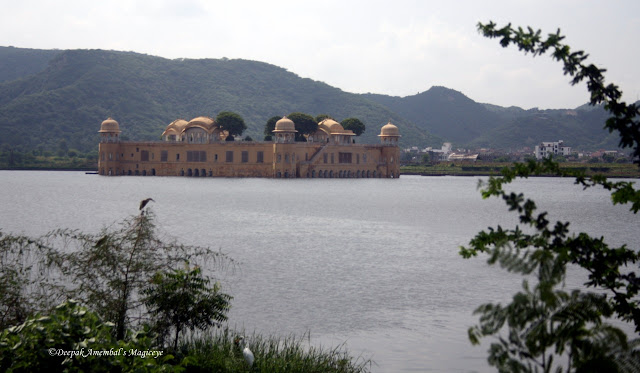 On the way to the Amer fort we also saw the Jal Mahal from a distance.
Amer Fort is situated on a forested hill premonitory, above the Maota Lake near Amer village, about 11 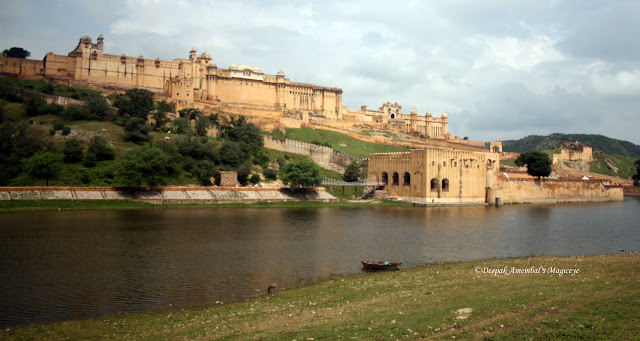 kilometres from Jaipur.
A narrow jeepable road leads up to the entrance gate, known as the Suraj Pol or the Sun Gate, of the fort. 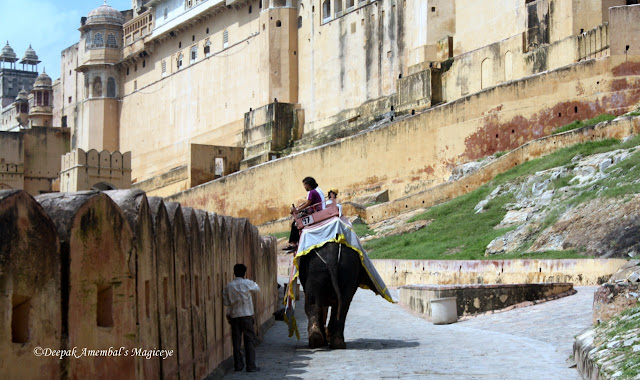 We are not allowed to drive right up and have to park in the huge parking lot provided. You can either walk up or go by the jeeps or elephants available for the purpose. We chose to walk.
Amer Fort was built by Meena king Raja Alan Singh Chanda and was later occupied by Kachhawa Rajput. This fort along with Jaigarh Fort located immediately above on the Cheel ka Teela (Hill of Eagles) of same 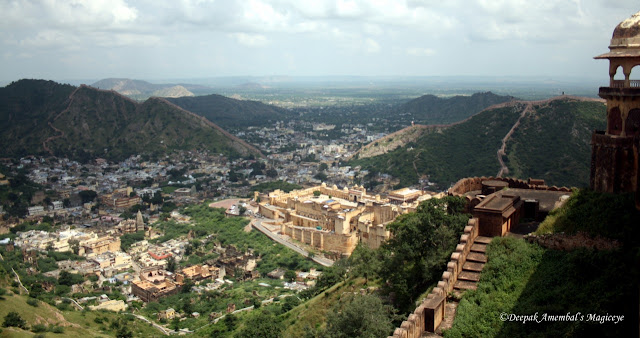 Aravalli range of hills, is considered as one complex, as the two are well connected by subterranean passage. This passage was meant as an escape route in times of war for the royal family members and others in the Amer Fort to shift to the more redoubtable Jaigarh Fort.

The views from top are breathtaking. 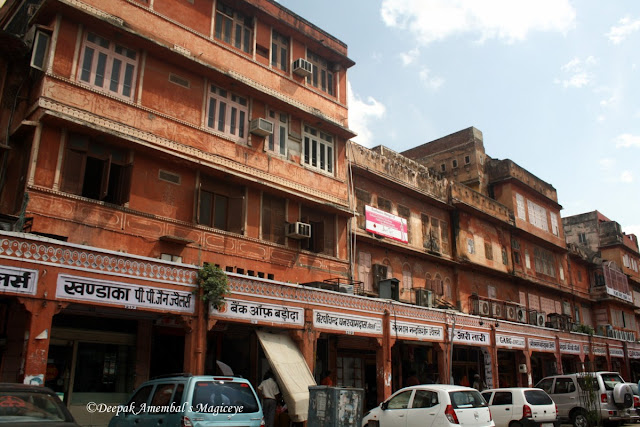 Spent the afternoon shopping in the city and had dinner in Handi restaurant. Had the ‘Lal maas’ (red meat) a

typical fiery Rajasthani dish with nice crispy Naans.
On the third day we met Bharat, our friend and guide from Jaipur. 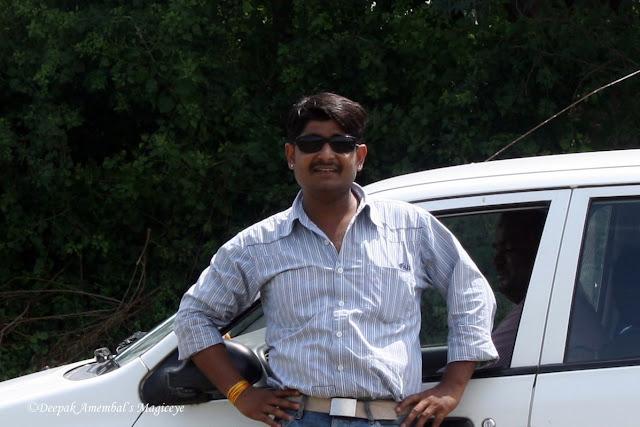 He promised to show us Unseen Rajasthan and led us to Abhaneri, a small town, popular for its astonishing step well and Harshat Mata 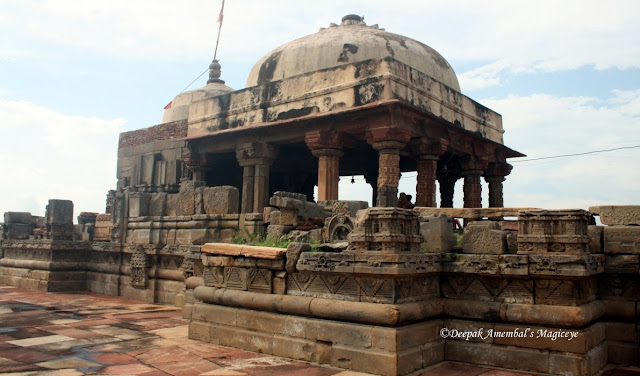 Temple and Bhangarh (haunted Palace), which are around 90kms from Jaipur. 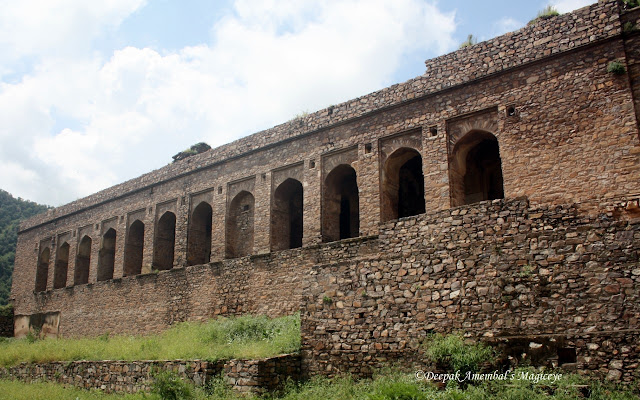 The myth behind Bhangarh - The charm of princess of Bhangarh Ratnavati was said to be matchless in all of Rajasthan. Being eighteen years old, the princess started getting matrimonial offers from heads of other states. In the same region there lived a tantrik, a magician well versed in the occult, named Singhia who was desperately in love with the princess. He knew that he would never be allowed to even see her, let alone meet her. One day, he saw the princess’ maid in the market buying scented oil for her. Seeing this, he got an idea by which he could meet the princess. He used his black magic and put a spell on the oil which would hypnotize the princess by her merely touching the oil, and she would surrender herself. The Princess happened to drop the container over a stone. As soon as the oil touched the stone, it started rolling towards the wicked tantrik and crushed him. While dying, Singhia cursed the palace with the death of all who dwelt in it, without any rebirth in their destinies. The very next year there was a battle between Bhangarh and Ajabgarh and Ratnavati died. Till date, people believe that it is haunted and nobody dares visit after sunset.