If one has an interest in ancient Indian history and wish to indulge in some cave art appreciation, a visit to Karla and Bhaje caves is a must. Located about 10kms from Lonavala and 115kms from Mumbai the caves are worth spending the weekend at. 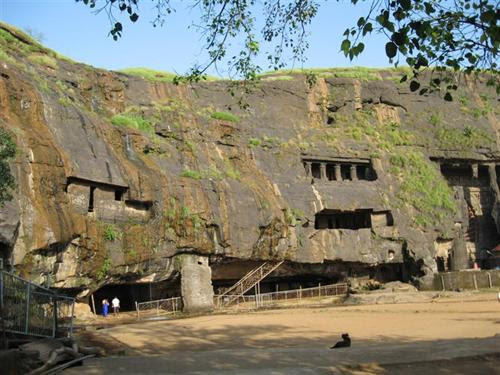 As structures excavated in stone were the most durable, rock cut architecture came to the fore in during the reign of Emperor Ashoka who was looking for a lasting medium to commemorate and spread the teachings of Buddha. The style of architecture turned out to be especially suited to the Sahayadri ranges, as the hills were composed of alternating horizontal strata of harder and softer volcanic trap rock making excavation easy. Hence, the Sahayadri range is dotted with cave temples. Built along trade routes, the Buddhist monasteries were important stages on the journey providing resting places for the traders as well as supply-cum-banking stations for them. There are about 1000 rock cut caves in , a large number of which are around Lonavala - a name that is a derivation from Lenauli (place of many caves - meaning cave). Of these, the most famous are at Karla, Bhaja, Bedsa and Kondane. The Karla, Bhaja and Bhedsa cave temples are perfect examples of the early phase of Buddhist architecture known as the Hinayana phase wherein the Buddha was represented symbolically.

In the early period Hinayana Buddhism prevailed and in the latter, Mahayana Buddhism. In the Hinayana period, to which Karla belongs, the architectural design was wood based, being copies of wooden buildings of an earlier age. Also, as the Buddha, not wanting to be deified, had decreed that after his death, "neither the gods nor men shall see him", in this period he is represented by symbols. The lotus or the elephant, symbolizing his birth, the bodhi tree under which he attained Nirvana, the wheel of law which he set in motion, a stupa or mound symbolizing his death and a throne symbolizing that he is a prince among men. 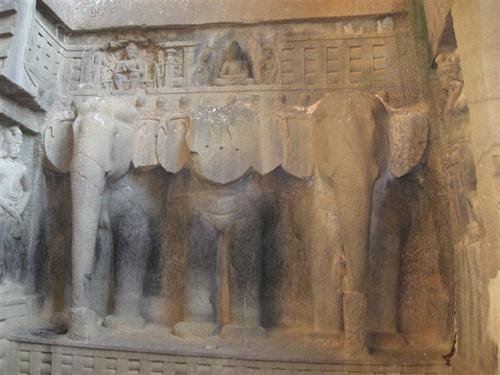 By the seventh century AD, the Mahayana sect took over and representations of Buddha became more common. By the central doorway, you will find sculptures of the Buddha preaching while seated on a lion-supported throne, along with magnificent carvings of three elephants. 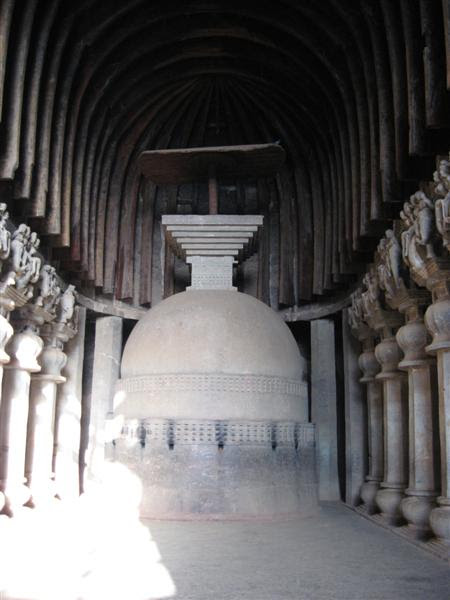 The excavations took the shape of the chaitya or prayer hall and the vihara or monastery. 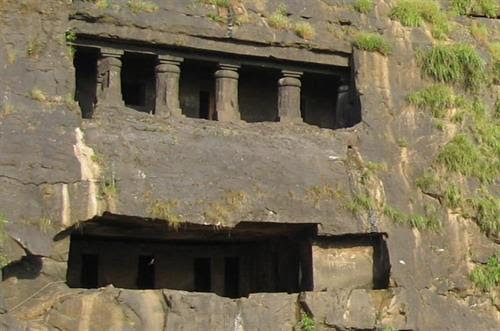 The viharas were the dwelling place of the monks and usually consisted of cells cut into the walls around three sides of a hall.

The excavation at Karla, the site of the largest Chaitya caves in , began around the beginning of the Christian era and culminated in the 4th century A.D. The principal cave measuring 37.87m x 13.87m x 14.02m (L x B x H) is the largest Chaitya among the Buddhist caves in the country. 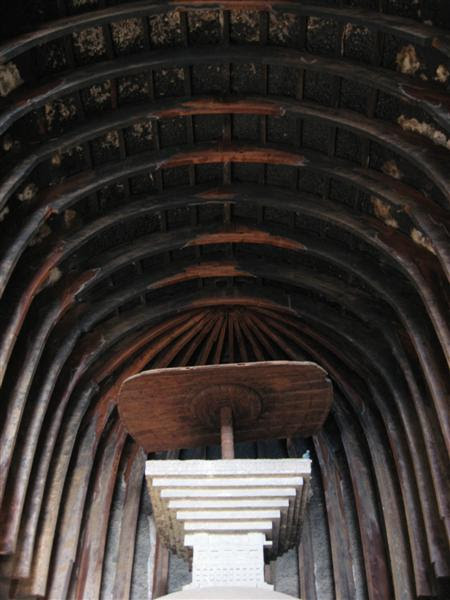 The most remarkable feature of this cave are the wooden rafters that support the arched roof. They have survived all elements over a period of more than 200years! 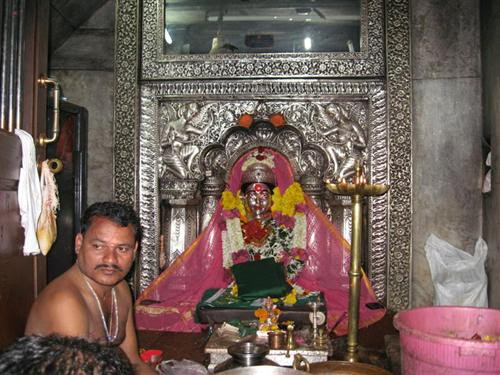 At the entrance of this cave is the visited by thousands of devotees from the coastal region around Mumbai during the annual festival in April (chaitra) and during Navratri. 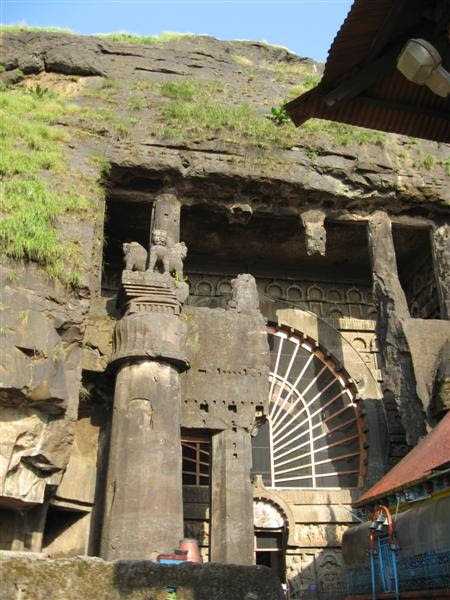 The Ekvira temple is on the right side of the cave while on the left is a giant pillar with three lions on its top. 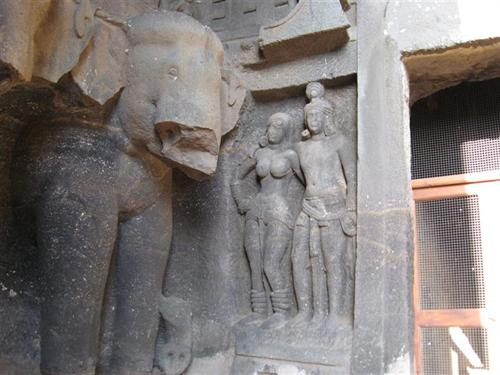 In the outer porch is a vestibule outlined by walls with carvings of couples and elephants. 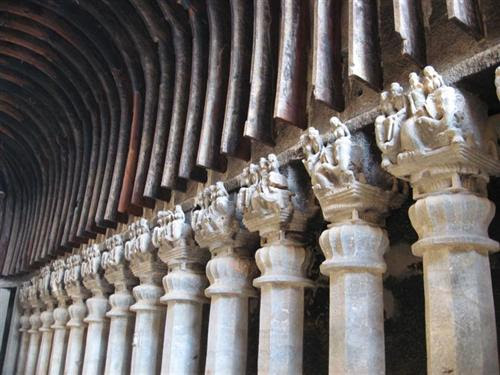 The interior of the hall consists of a colonnade and a sun-window. The colonnade has 37 pillars, each with some fine sculpture at the top. One group consists of two kneeling elephants each with a male and a female rider wearing ornate headdresses and jewelry. Another group has horses, originally decked with rich trappings, just as the elephants had ivory and silver tusks. 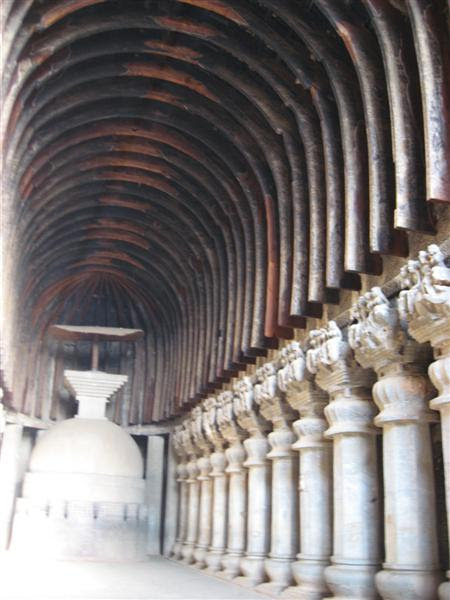 At the far end of the hall is a stupa, literally meaning funeral mound, above which is an umbrella - a symbol of royalty. The sun window, a wonderful arrangement for the diffusion of light, deflects the rays of the sun in a manner that soft light falls on the stupa.

On the other side of the highway and railway tracks are the Bhaja caves. The 18 Bhaja caves are supposed to have been built for Buddhist nuns and are as old as Karla caves. 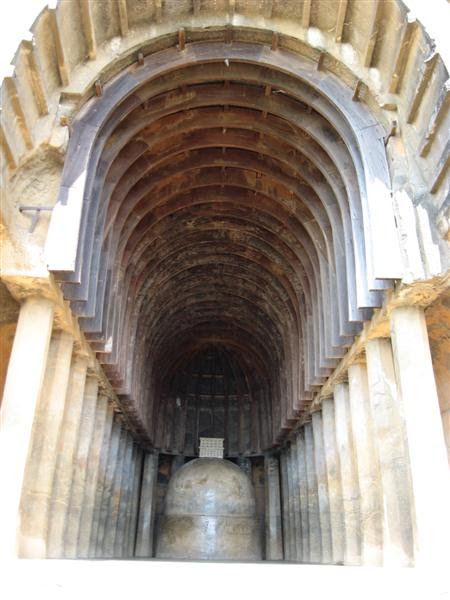 Cave no 12 is a chaitya hall - the finest of the cave complex. In the chaitya, there is a stupa that is 3.4 metres in diameter and has a deep socket for the shaft of an umbrella that once canopied it. 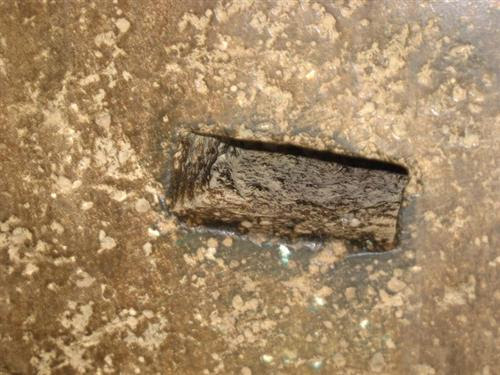 Cave no 1 is the dwelling house for the master architect, 10 are viharas and remaining 7 caves contain inscriptions about the donors. 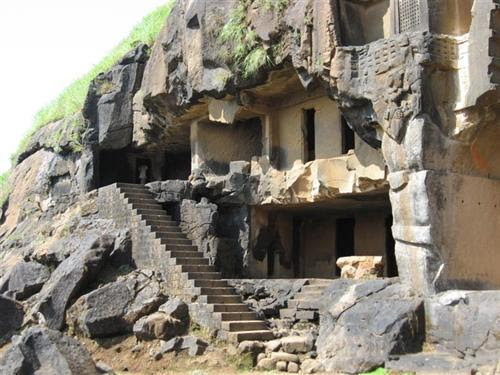 Apart from these, there is a group of stupas at the southern end. 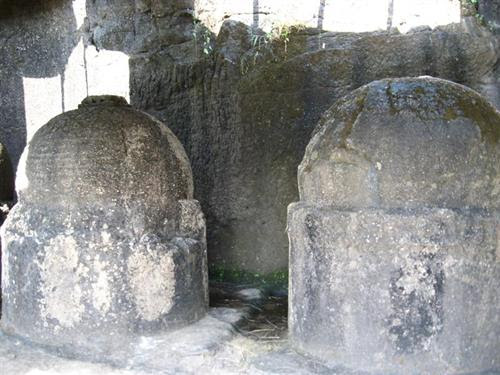 A few minutes' walk past the last cave is a beautiful waterfall, which, during the monsoon looks beautiful. From here, you can see the Visapur and Lohagarh forts. 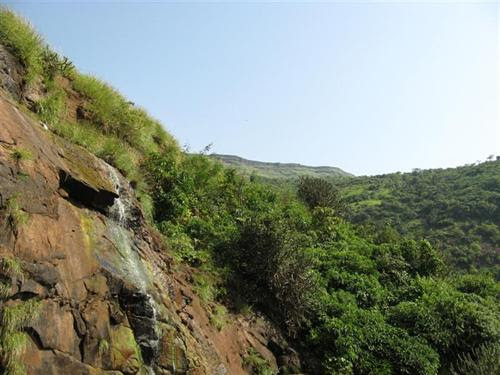 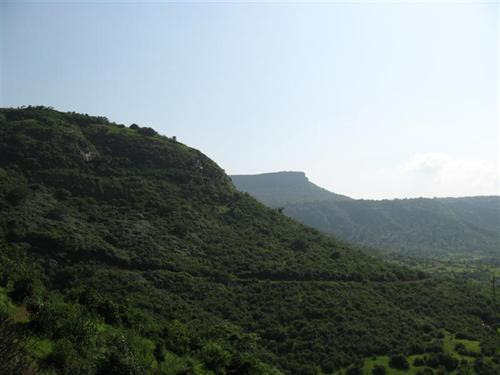 The last has two fascinating sculptures that are still well preserved. 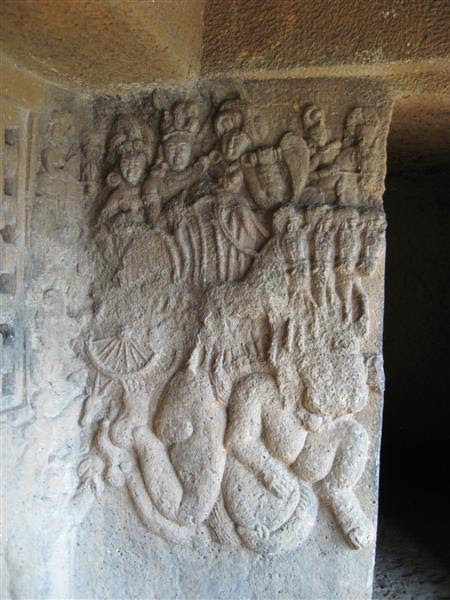 One sculpture depicts the sun god "Surya" with his chariot drawn by four horses. 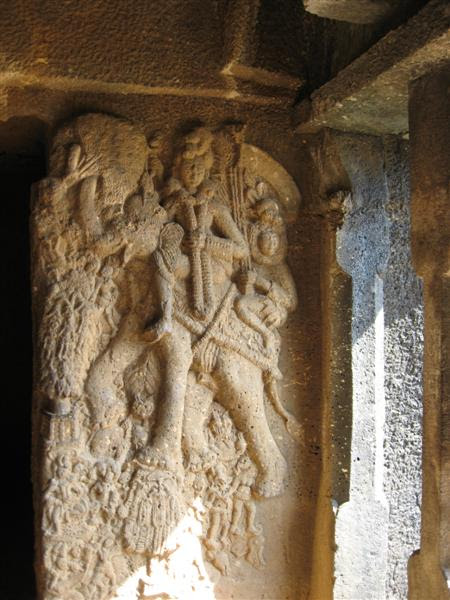 The other sculpture depicts Indra, sitting astride his elephant Airavata that appeared when the ocean was churned up.

Both these historic sites (Karla and Bhaja) can be covered in a day, preferably in the afternoon as they both face the West and one can enjoy the sights in the streaming rays of the setting sun.

By Road: Karla and Bhaja are 10kms from Lonavala, which is 100kms from Mumbai. Get onto the Mumbai – Pune expressway and take the 2nd exit for Lonavala. Once you get onto NH4 turn left towards Karla and soon you will encounter a tollbooth. Karla is just a couple of kms drive thereon. At Karla junction if you turn left you will head towards Karla caves or if you turn right, you will head towards Bhaje caves. Both are at a distance of about 5kms from the highway either way.

One can drive up almost to the caves and need to climb only for about 20minutes from the parking lots. 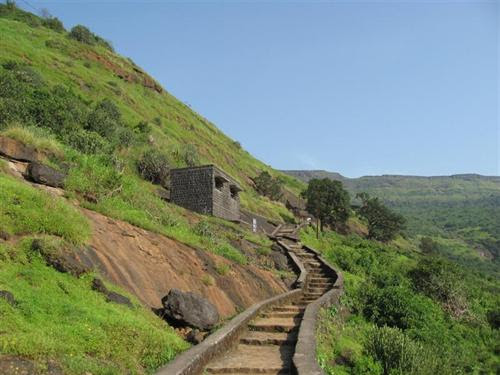 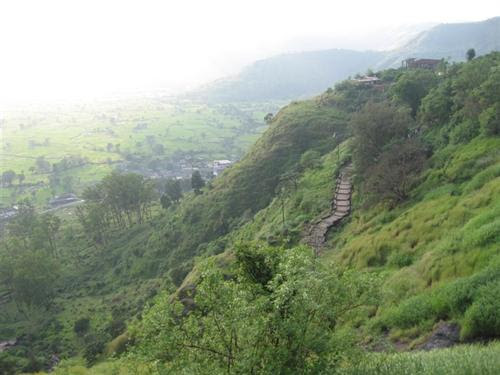 Entrance charges at both caves is Rs.10/- per head and parking charges Rs.10/- at Karla.

By Rail: The closest railway station is Malavali – 5kms either way (Karla or Bhaja). 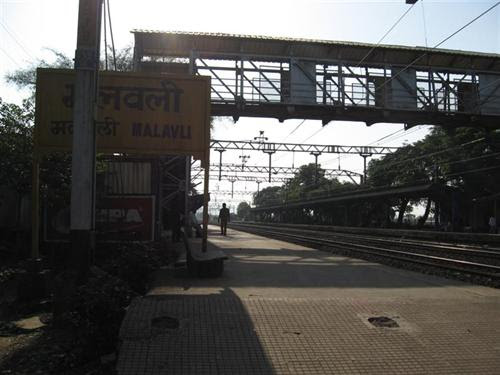 Hotels: MTDC is the best bet which has a wonderful resort at Karla or there are many other private hotels to suit every budget in Lonavala.