The rain was light but the clouds hugged the street of Mt.Abu and visibility was barely 50m which necessitated a late departure. By the time we left at 7am the rains had almost stopped and the visibility had marginally improved to about 200m. So after a couple of strong cuppa chais we set out for Udaipur.
After an uneventful drive of 170kms on good roads we reached Hotel Mandiram Palace in Udaipur at 1130am. After a heavy brunch, we went exploring on foot the Jagdish temple and the City Palace which was barely a km away. There was an irritating slight drizzle all the time.
All this was around the Pichola lake which is in the old quarters of Udaipur hence all the roads are very 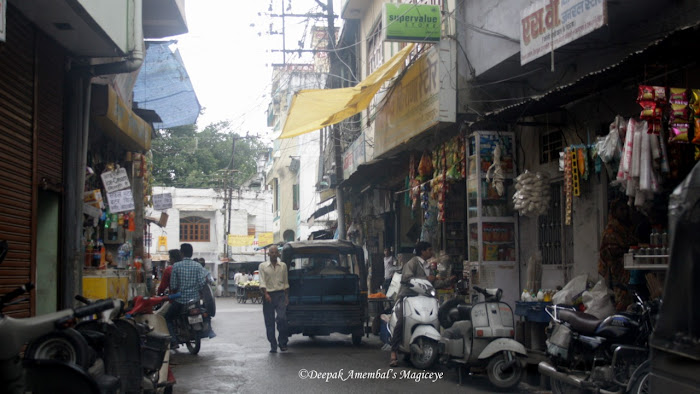 narrow  and driving around is more of a pain than a pleasure. 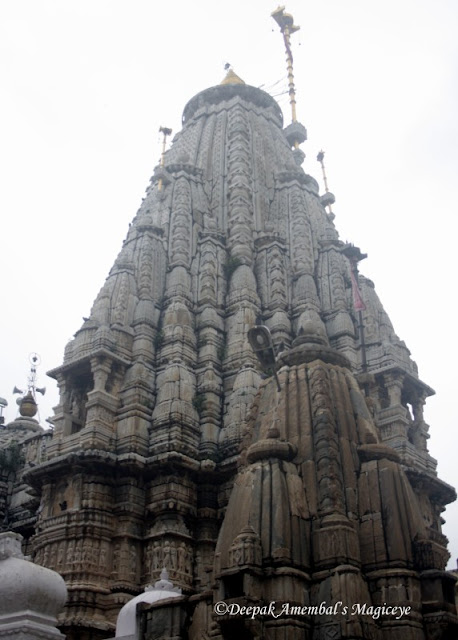 Jagdish Temple is located in the City Palace complex of Udaipur, and built in the Indo-Aryan style of architecture. It was built in 1651 by Maharana Jagat Singh, who ruled Udaipur during 1628-53. The temple is dedicated to Lord Vishnu (Laxmi Narayan), the preserver of the Universe. 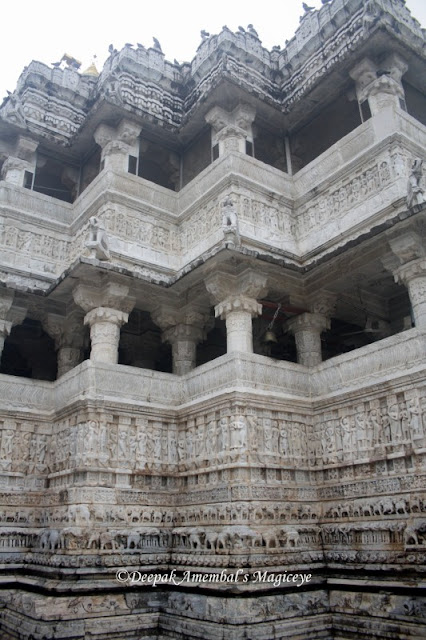 This three-storied temple is a wonder of architecture that comprises beautifully carved pillars, decorated ceilings andpainted walls. In those times, 1.5 million rupees were spent to raise this structure. The spire of the main temple is around 79 feet high and is festooned with sculptures of dancers, elephants, horsemen and musicians. 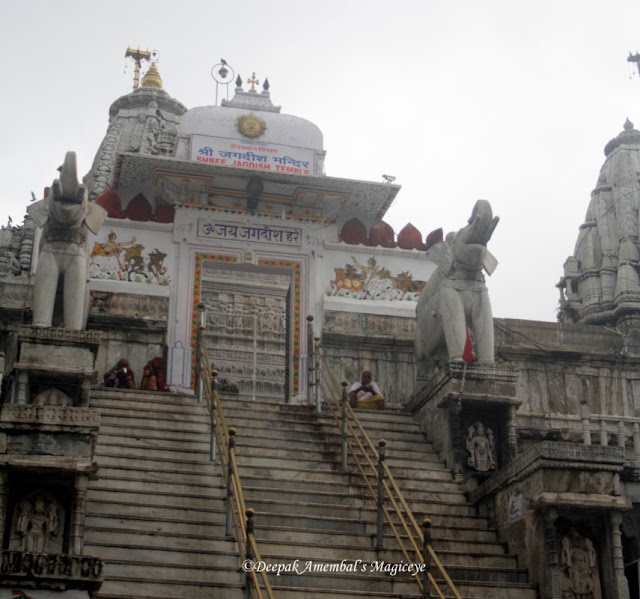 At the entrance of the temple, there are two huge stone elephants. To reach the main shrine, you have to take a marble flight of 32 steps. 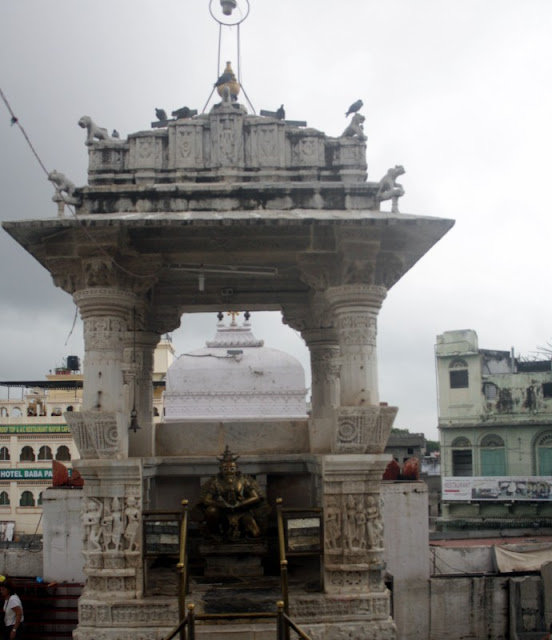 Here, you will find a brass image of Garuda, a figure of half-man and half-eagle guarding the doorway of Lord Vishnu. 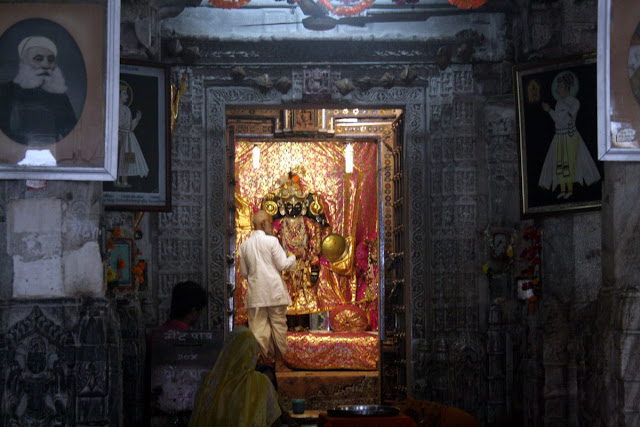 The main shrine houses the striking four-armed image of Lord Vishnu. This idol is carved out of a single piece of black stone. 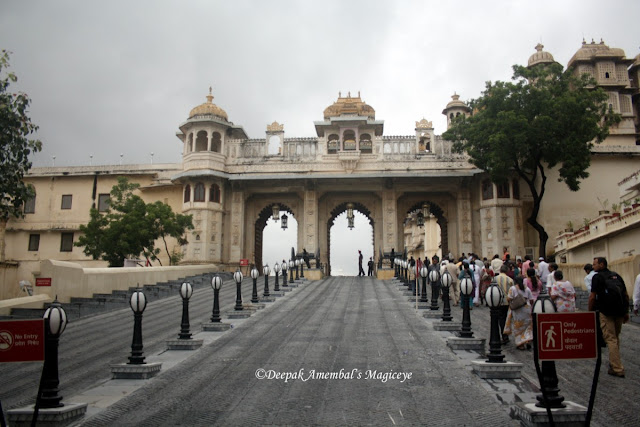 From here we walked on to the City palace, a palace complex that was built by the Maharana Udai Singh as the capital of the Sisodia Rajput clan in 1559, after he moved from Chittor. It is located on the east bank of the Lake Pichola and has several palaces built within its complex. Udaipur was the historic capital of the former kingdom of Mewar in the Rajputana Agency and its last capital. 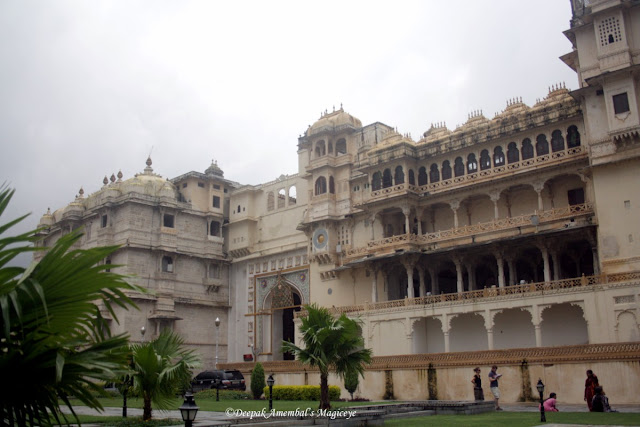 The City Palace was built in a flamboyant style and is considered the largest of its type in Rajasthan, a fusion of the Rajasthani and Mughal architectural styles, and was built on a hill top that gives a panoramic view of the city and its surroundings. 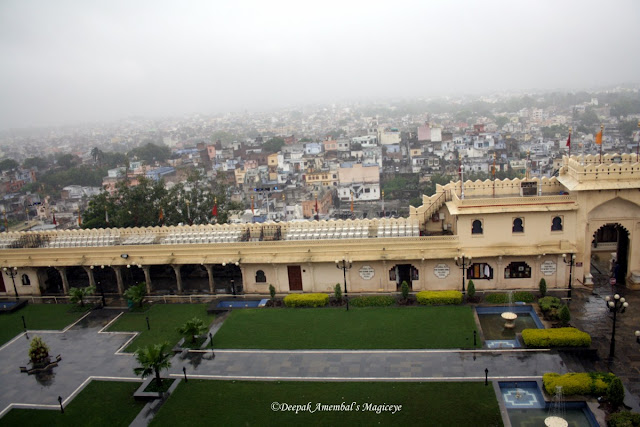 The series of palaces packed in the city palace complex, facing east (as customarily appropriate for the Maharana dynasty – the Sun dynasty), behind an exquisite facade of 244 metres (801 ft) length and 30.4 metres (100 ft) height, were built on a ridge on the west of lake Pichola. They were built over a long period, from 1559 onwards, by 76 generations of Sisodia Rajputs or Suryavanshi Rajputs (worshippers of Sun god). Several Maharanas (the title Maharana is distinctly different from Maharajah, as the former connotes a warrior and the latter a ruler or a king) starting with Udai Mirza Singh II, have richly contributed to this edifice, which comprises an agglomeration of structures, including 11 small separate palaces. 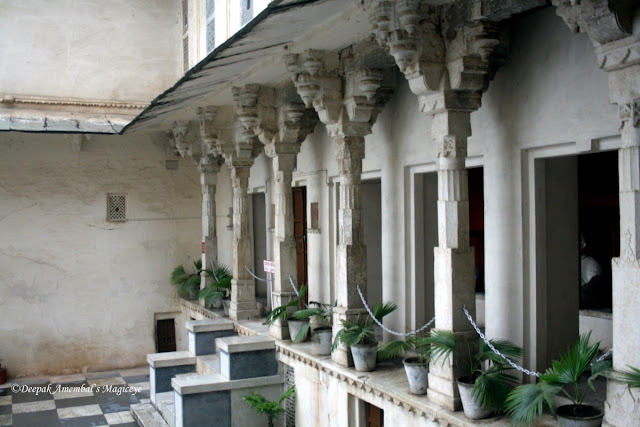 The unique aspect of this conglomeration is that the architectural design (a rich blend of Rajasthani, Mughal, Medieval, European and Chinese Architecture) is distinctly homogeneous and eye catching. The palace complex has been built entirely in granite and marble. 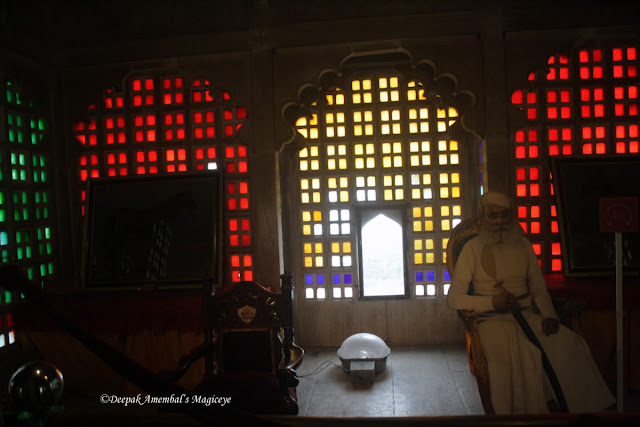 The interiors of the palace complex with its balconies, towers and cupolas exhibit delicate mirror-work, marble-work, murals, wall paintings, silver-work, inlay-work and leftover of colored glass. The complex provides a fine view of the lake and the Udaipur city from its upper terraces. 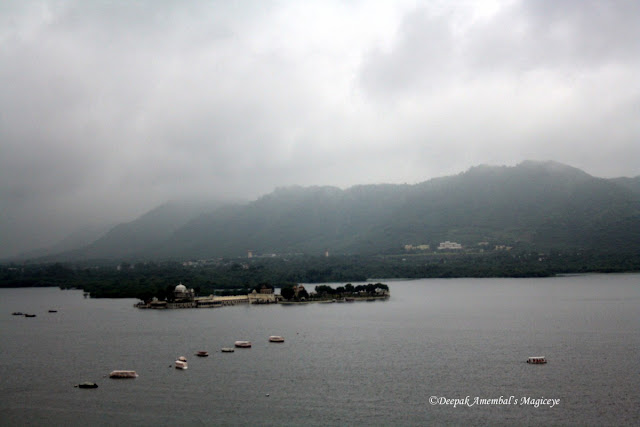 Mor Chok or Peacock square is integral to the inner courts of the palace. The elaborate design of this chamber consists of three peacocks (representing the three seasons of summer, winter and monsoon) 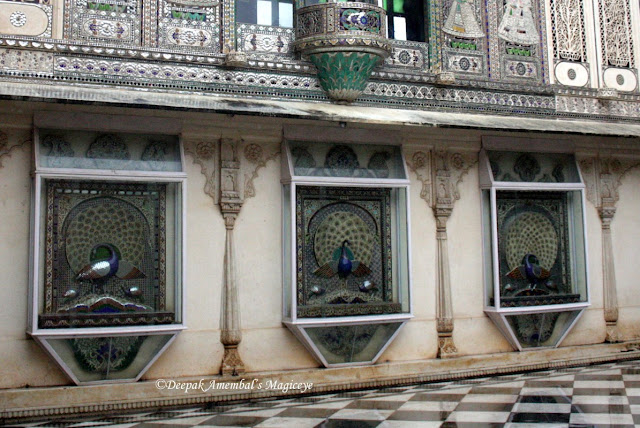 modeled in high relief and faced with coloured glass mosaic, built into successive niches in the wall area or jharoka, These were built during Maharana Sajjan Singh’s reign, 200 years after the palace was established. The peacocks have been crafted with 5000 pieces of glass, which shine in green, gold and blue colours.

In 1974, a part of the city palace and the 'Zenana Mahal' (Ladies Chamber) were converted into a museum. It is very informative. 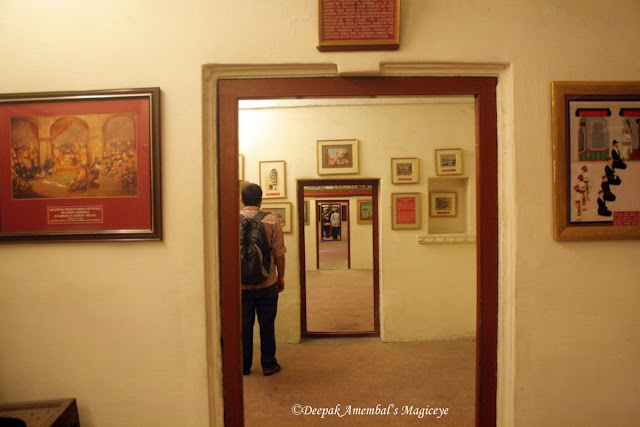 On the way back to the hotel we stopped for a bite at Govinda’s for  pizzas and frappes.

By now we were very keen on trying out some authentic Rajasthani cuisine and on checking aorund, realised there is Natraj Dining Hall which serves some wonderful Rajasthani thaalis. So we dined there and had a 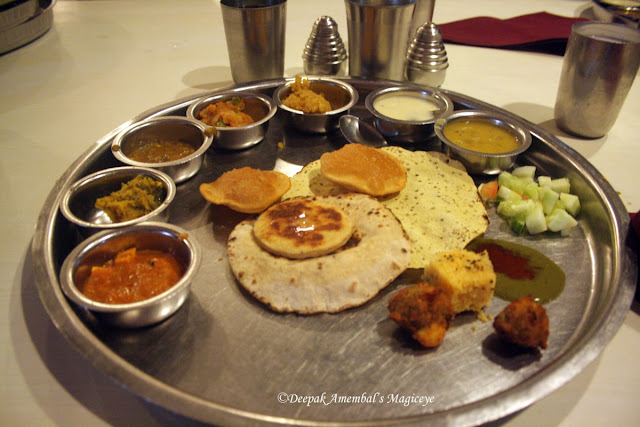 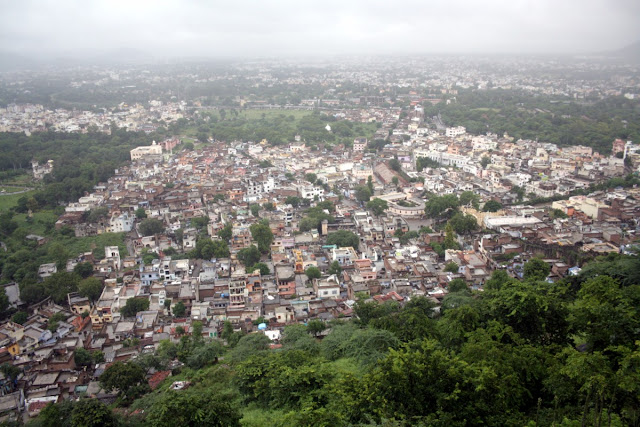 Next morning after breakfast we left for the famed Ropeway which takes you to the top of a hill from where you get some panoramic views of Udaipur. 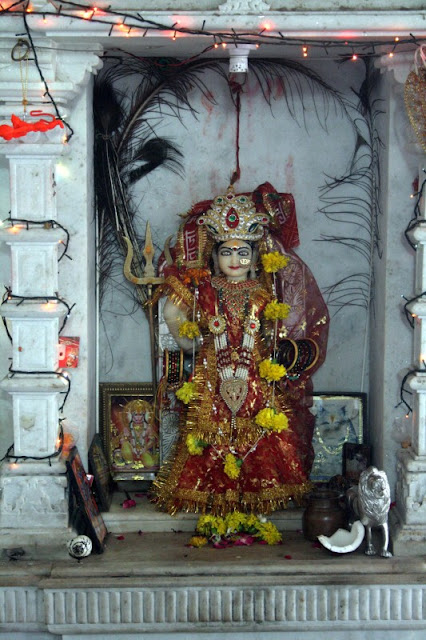 They have also started constructing a Karni Mata (of rat fame) temple up there adjacent to a durgah. 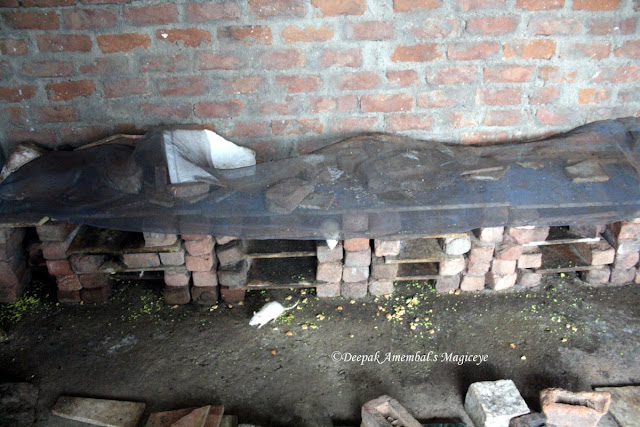 Then we visited the fabulous Vintage car museum of the royal family. It was fascinating to say the least with a 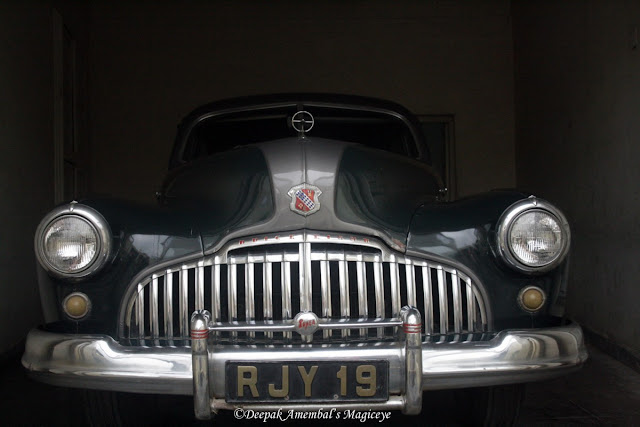 Buick Super 1946
very informed guide of the museum showing us around.

For lunch we visited Natraj dining Hall again but this time their a-la-carte restaurant where we had the famous Dal Bati, Tomato sev, Gatte ki subji and Pakodi kadhi all very delicious. 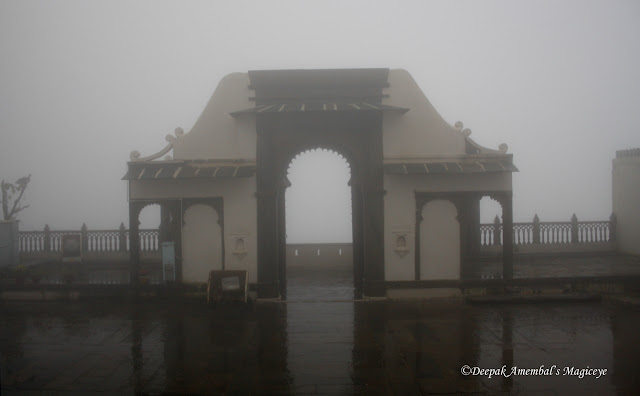 The rains were still following us and followed us all the way to the Monsoon Palace in Sajjangarh which was cloaked in clouds.  The Monsoon Palace, formerly known as the Sajjan Garh Palace, is a hilltop palatial residence, overlooking the lake Pichola. It is named as Sajjangarh after Maharana Sajjan Singh (1874–1884) of the Mewar Dynasty, who built it in 1884. It offers a panoramic view of the city's lakes, palaces and surrounding countryside. It was built basically to watch the monsoon clouds; hence, appropriately, it is popularly known as Monsoon Palace. It is said that the Maharana built it at the top of the hill to get a view of his ancestral home of Chittaurgarh. Previously owned by the Mewar royal family, it is now under the control of the Forest Department of the Government of Rajasthan and has been opened to the public recently. 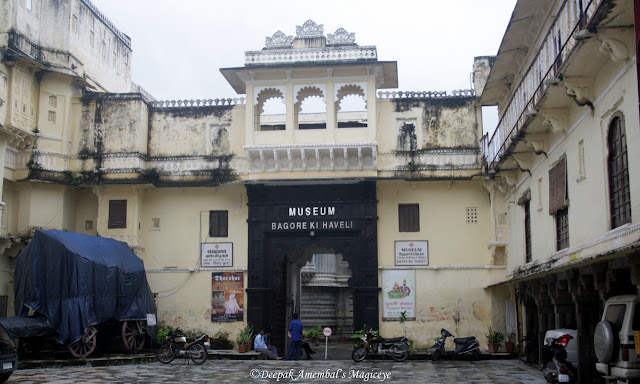 In the evening we visited the Bagore ki Haveli museum which had on display an amazing collection of puppets. 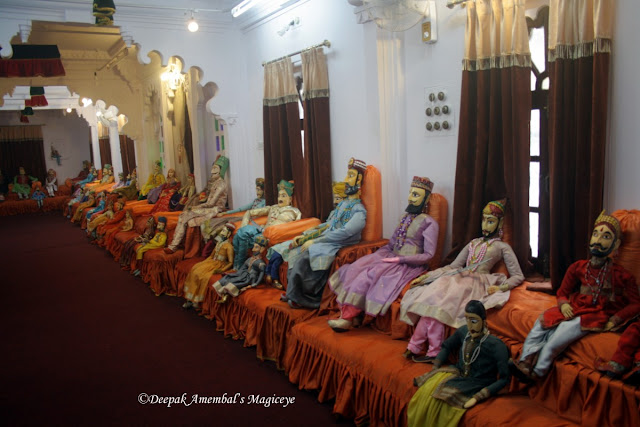 Bagore Ki Haveli is an ancient building that stands on the platform of Gangori Ghat in the vicinity of Pichola Lake. The splendid architecture of the mansion boasts of delicate carved work and excellent glass work. In the eighteenth century, Bagore Ki Haveli was built by Amir Chand Badwa, who was the Chief Minister at the Mewar Royal Court in earlier times. When Amar Badwa died, the building came under the possession of Mewar State.
In 1878, the Haveli made the abode to Maharana Shakti Singh of Bagore, who further incorporated three stories to the main structure. Since that time, the mansion came to be known as Bagore Ki Haveli (Mansion of Bagore). The interiors of the Haveli are embellished with intricate and fine mirror work. While strolling in the Haveli, you can also see the private quarters of the royal ladies, their bath rooms, dressing rooms, bed 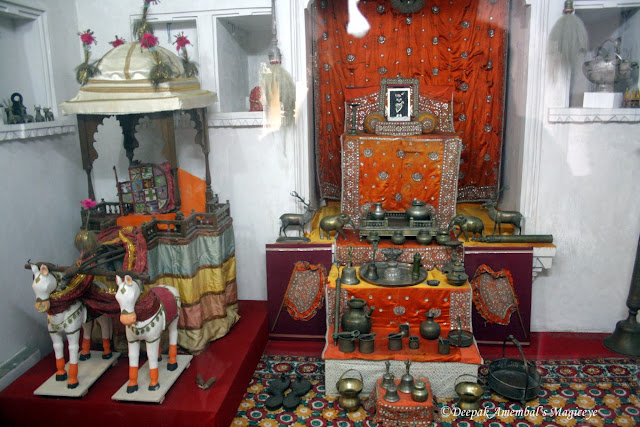 On the way back to the hotel we stopped by at the German Bakery for a coffee and later dined at the 'Food Place' which offered a superb view of the well lit City Palace. 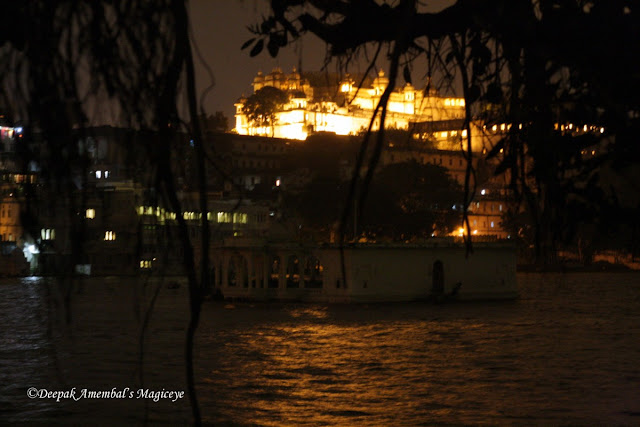 We could not visit the Lake Palace as it is no longer open to tourists. It is a hotel run by Taj, hence open only for residents/guests.

Retired early after our fill of Udaipur as we had a long journey ahead to Jodhpur next morning.