Keylong to Leh - Part 4 of my 2 wheeler Odyssey

On our way to Keylong we made our scheduled stop at Tandi for tanking up and filling up our spare cans for petrol as there are just a couple of petrol pumps in Ladakh. 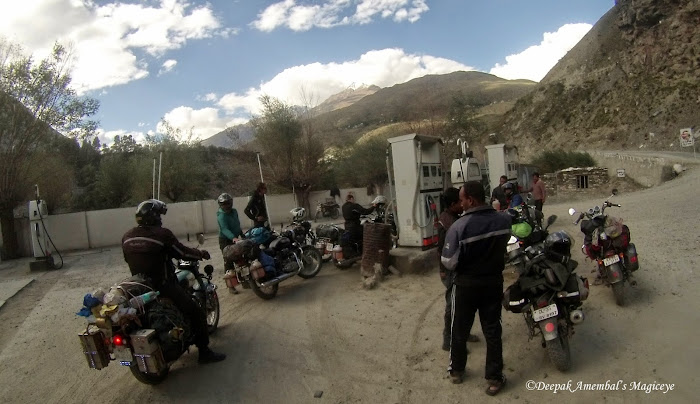 There is a board outside this petrol pump on the Leh Manali highway which states that the next petrol pump is after 365kms. So after filling up we went onwards to Keylong (11000feet) to stay for the night.
Had a very pleasant stay in Keylong with some superb views from the room to keep us entranced. 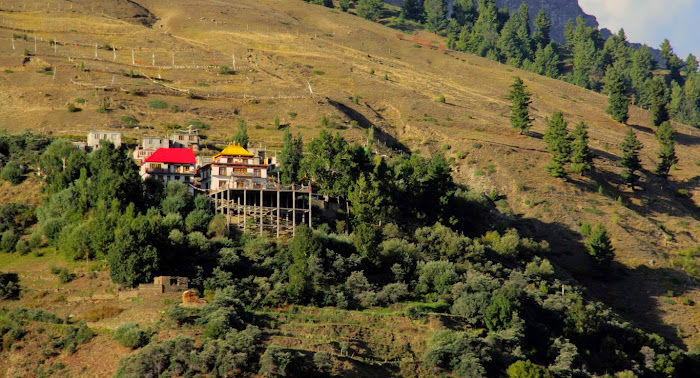 Hotel was booked for us by the Central Hotel Desk team of HV Kumar.
Feeling refreshed next morning we set out for Sarchu. Was a beautiful ride through some of the most scenic sights. Only at a few places was the road being resurfaced due to which there was gravel, else was a lovely tarmac winding road through the mountains. On the way we passed the lovely 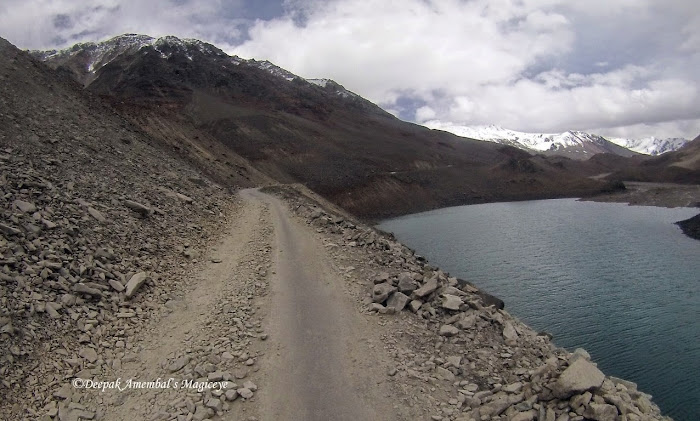 ‘Suraj Tal’ a crystal blue lake.
Enroute when we stopped for a tea break near Darcha we met a young Englishman on a cycle who 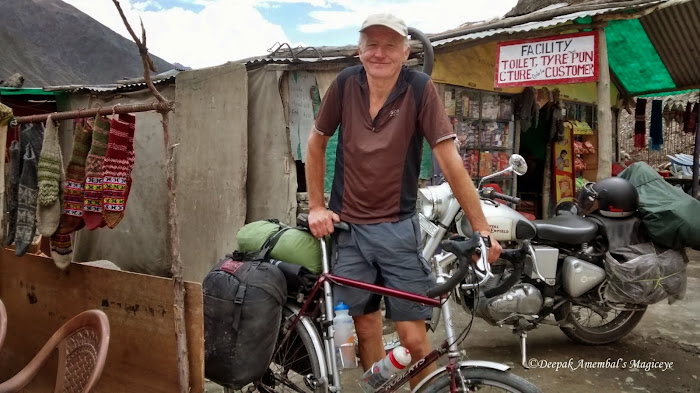 was cycling all alone to Leh! Admirable spirit indeed!
We soon crossed the Baralacha la pass at 16000feet and reached  Sarchu (14000feet) around four in the evening and bedded in a tented accommodation called ‘’Silent Place’. We were the only customers in the ten bedded tent and had the full tent to ourselves! The temperature dropped considerably at nightfall and we had to cover ourselves with a couple of thick blankets to keep warm and sleep well which we did. 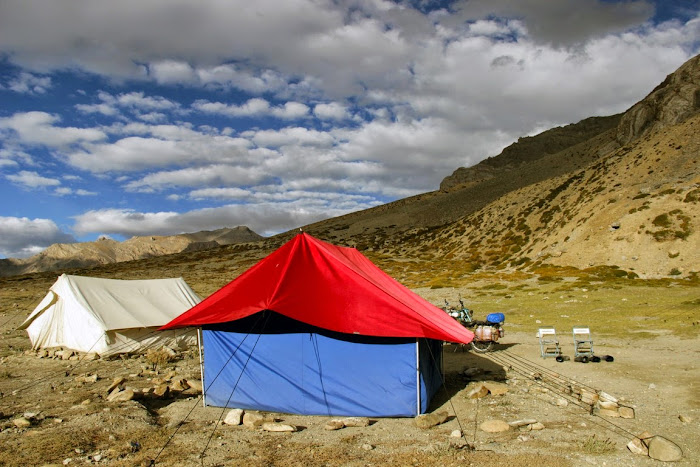 Ref Wiki ‘Sarchu (also known as Sir Bhum Chun) is a major halt point with tented accommodation in the Himalayas on the Leh-Manali Highway, on the boundary between Himachal Pradesh and Ladakh (Jammu and Kashmir) in India. It is situated between Baralacha La to the south and Lachulung La to the north, at an altitude of 4,290 m (14,070 ft).The journey along the Manali-Leh highway at high altitude and variable road conditions, normally takes two days, so travellers and tourists use this spot as an overnight stop. An Indian army camp is sited nearby on the banks of the Tsarap Chu river. The highway and thus the camp are closed during the winter, when snow blocks the high passes along the road.This spot can also be used as a start point for the difficult trek into the Zanskar region of Ladakh.’

We set out for Leh next morning in lovely pleasant weather and clear skies.
Had a very pleasant ride, crossed the Gata Loops and reached the Moray plains which are a delight to ride on. It is like a race track where you can check how fast your vehicle can go! When we were on the Moray plains we experienced the typical Ladakhi weather. On our right was bright sunshine and on our left we could see snow flakes! When we neared Debring we were told by drivers of returning  tourist cabs that there was heavy snowfall in Tanglang La pass and not advisable to continue beyond Debring. Hence we stayed the night at Debring (15634feet) in a tented accommodation called ‘Julley’ (Hello in Ladakhi). Here again we were the only customers and were treated like royalty. 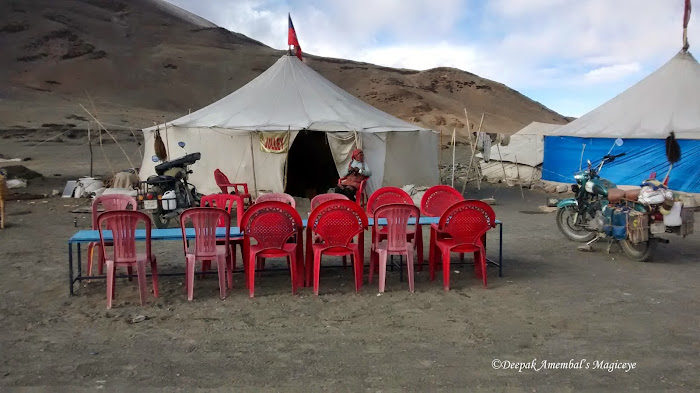 The charge per bed per night was Rs.100/- and they even covered our bikes with blankets to ensure they would not be snowed under without extra charges! Next morning we realised their wisdom in doing so as the blanket covering our bike was covered with frost. It had snowed intermittently all night. 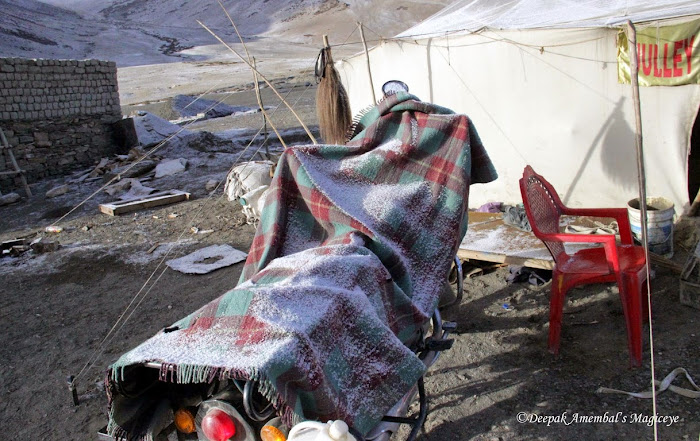 We were provided with hot water to wash and the lady of the house cooked up some delicious vegetarian meal for us and we could sleep contentedly.
Fortunately next morning the sky was clear and we set out for Leh. 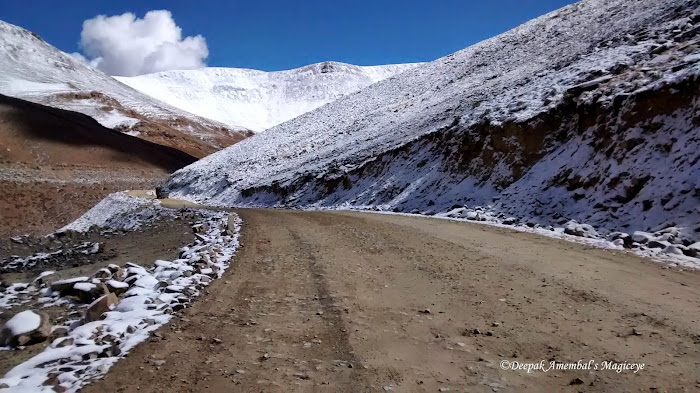 As we neared Tanglang La pass (17480feet) we saw the road flanked by snow and at the pass we were stopped along with other vehicles as there was a patch of road that was covered in snow that was being cleared by a couple of BRO (Border Roads Organisation) officers. Amazingly hard working, dedicated to their job they soon cleared a narrow path covered it with mud and let a couple of trucks go so that it is patted down hard and then let us go across. 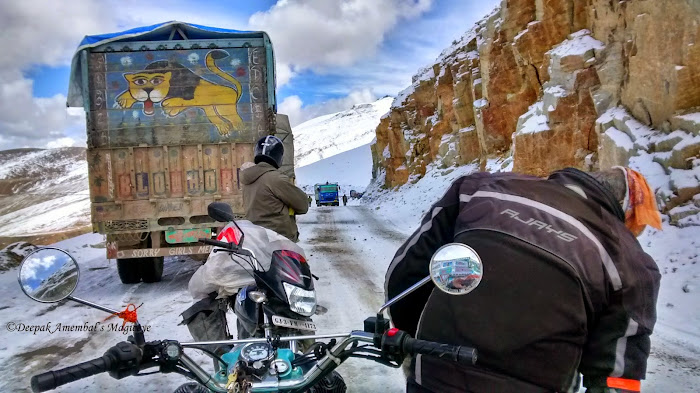 Hats off to the BRO officers who so selflessly work to ensure there is no traffic jammed!
We reached Leh around three in the evening and checked into Jorchung Hotel, again booked by the Central Hotel Desk of HV Kumar. We stayed here for four nights.
Will tell you all about what we did there in the next post!

Kapurthala to Keylong - Part 3 of my 2wheeler Odyssey

We reached Kapurthala in sunny weather and it looked like the rain Gods were fed up of drenching us.
We were received very warmly, the typical North Indian warmth and hospitality by the Singhs and throughout our couple of days stay there, they ensured that we were fine dined,  well rested and ready for the next lap.
Our first task on hand was to get our bikes serviced and checked which we did at the local Royal Enfield dealer’s workshop. They did a fine job of it and refused to take any money from us, saying that it was their privilege and honour to service our bikes! While our bikes were being serviced the 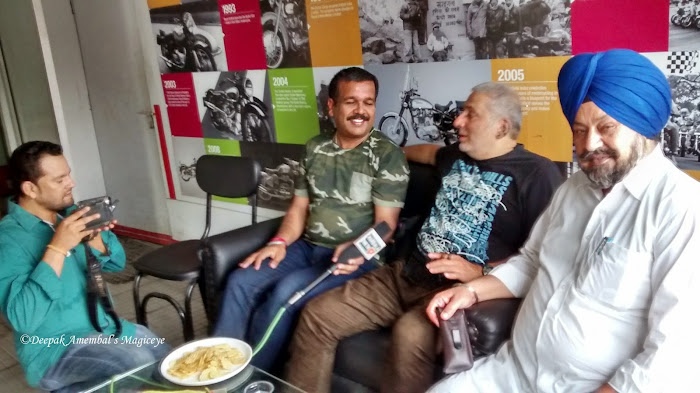 local print and electronic media arrived to interview us. They were keen on finding out why the son of legendary Shammi Kapoor was riding around when he could have very well flown around! The answer my friends will be in the book that Aditya will be writing about this ride. 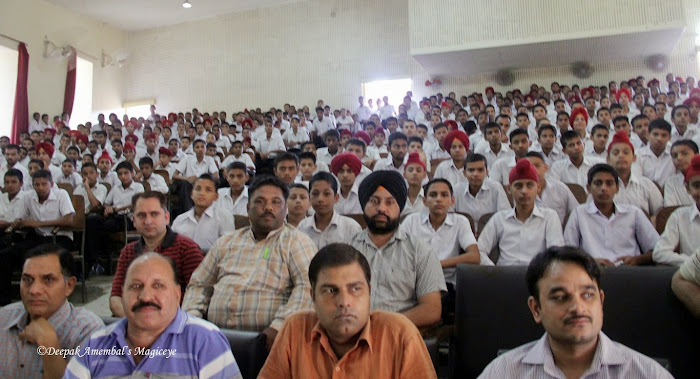 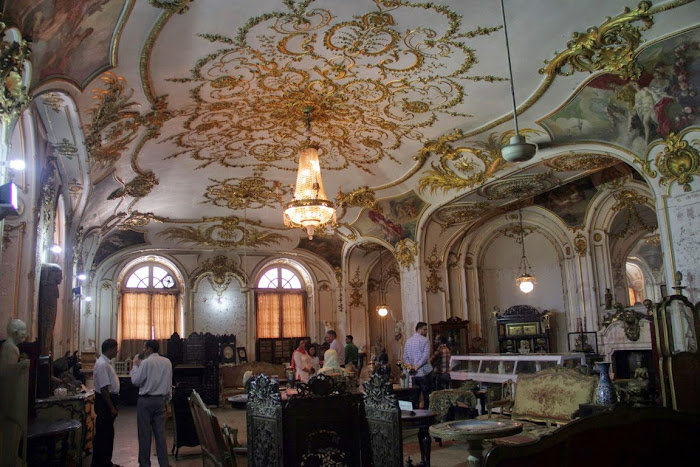 widen mental horizons. We were also taken around the fabulous Kapurthala palace museum which is not yet open to the public.
On the morning of our departure, we were invited to visit the school run by our hosts where we were felicitated and Aditya gave a small speech to motivate the students. After this, we were led by the local electronic media to the highway to see us off and this was captured by them to be telecast on their news channels.
Our next halt was to be at Mandi and the rain Gods possibly felt lonely without us and in the last couple of hours of us reaching our destination, we were drenched in the heavy downpour and we stayed in the first hotel that we came across. Fortunately it was a good, decent hotel and here too we had to sleep in our towels and hope our clothes would dry before we left next morning for Manali.
After a good rest and with dried clothes we set out on a bright morning towards Manali. The route right from Kapurthala was beautiful with the Beas river meeting us on the way and at times accompanying us. Our destination was ‘Ride Inn’ a bikers’ motel in Manali but away from the 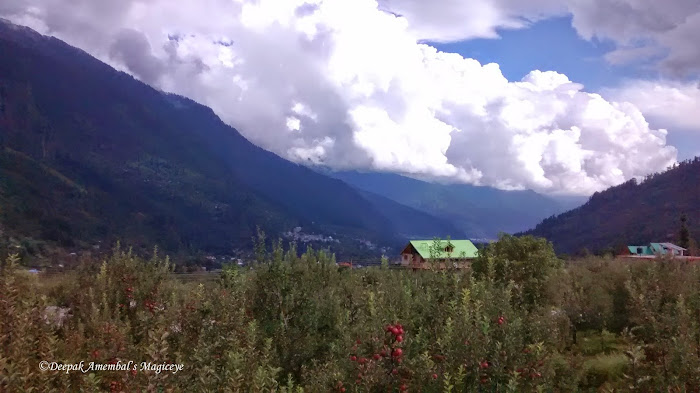 maddening touristy crowd that throngs Manali. This was located in an apple orchard and the views from the Inn were beautiful. We soaked in the atmosphere for two days and then started our journey towards Leh, Ladakh. It was in Manali ( 2,050 m) that we started taking ‘Diamox’ as a preventive measure against AMS (Acute mountain sickness, a form of altitude sickness), on our Doctor’s advice.
Enjoyed the ride upto Rohtang pass (3,979 m) but the descent was treacherous as it had apparently rained the earlier night and the road was replaced by slush and stones. It was here that I had my 1st fall, albeit in slow motion, when I pressed hard on the front brake, which is a disc brake, and toppled over. Aditya promptly came over to assist me get on the bike to carry on. His presence was really a morale booster and he had to come quite a few times to help me up after my falls. Fortunately all these falls were in slow motion and a result of my reflex action (developed over the years from riding the Yezdi which had drum brakes on both wheels) of pressing hard the front brake.
When we reached Khoksar, we were stopped as a bridge over Chandra river, that needed to be 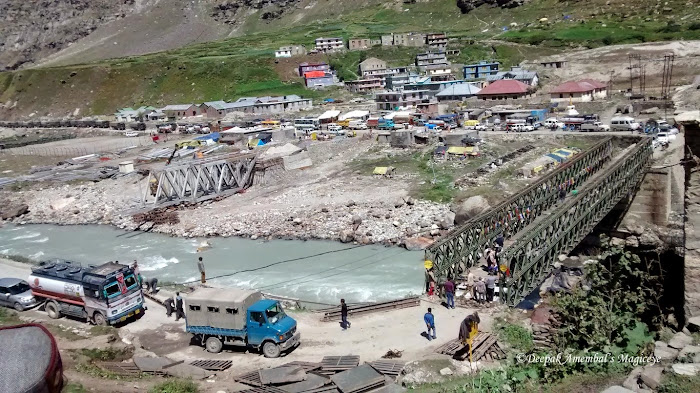 crossed was being repaired. The wait was for four hours when we met some interesting travellers in the cafes. The most inspiring was a family of four consisting a male (74), and 3 females (all in late 60s) travelling in a Maruti 800! And this was their fourth trip to Ladakh! Met another young, newly married couple from Pune on a Royal Enfield, who had decided not to have children for at least five years so that they could fulfil their bike travels together without any encumbrances. Committed travellers! 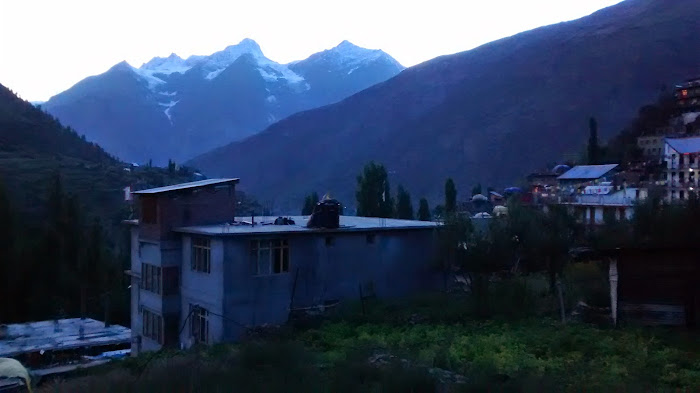 Soon it was time to ride onwards and we did, to Keylong where we checked in for the night.