Bhimashankar, one of the twelve Jyotirlingas is at a distance of around 200kms from Mumbai.

It is a place to revel in nature and spiritual bliss.

It is also the source of the River Bhima, which flows southeast and merges with the river Krishna.

It is built in the Nagara style of architecture and dates back to the 18th century. One can also find influences from the Indo Aryan style of architecture. It is believed that the ancient shrine was erected over a Swayambhu Linga or a Self Emanated Shiva Linga. Thus the Linga is exactly in the centre of the floor of the Garbagriha or the Sanctum.

Intricate carvings adorn the pillars and the doorframes of the temple. Within the temple precincts there is also a small shrine dedicated to Lord Shani. The statue of Nandi – Lord Shiva’s vahana is installed just at the entrance of the temple as aways. The shikhara of the temple was built by Nana Phadnavis. Shivaji - the great Maratha ruler is said to have facilitated the carrying out of worship services. As with other Shiva temples in this area, the sanctum is at a lower level.

As per the legend, once a demon called Bhima lived with his mother Karkati in the dense forests of Dakini, on the lofty ranges of the Sahaydris.

It is said that Bhima was so cruel that every one was scared of him. But what tormented Bhima was his curiosity regarding his own existence. One day, Bhima urged his mother to tell him who his father was and why he had abandoned them in the wilderness of the forest. His mother revealed that he was the son of Kumbhakarna, the younger brother of the mighty King Ravana - the King of Lanka. Bhima’s mother Kartaki also told him that Lord Vishnu in his incarnation as Lord Rama annihilated Kumbhakarna. This infuriated Bhima and he vowed to avenge Lord Vishnu. Bhima performed severe penance to please Lord Brahma. The compassionate creator was pleased by the dedicated devotee and granted him immense prowess. With so much power, Bhima began to cause havoc in the three worlds. He defeated King Indra and conquered the heavens. He also defeated a staunch devotee of Lord Shiva - Kamrupeshwar and put him in the dungeons. All this angered the Gods and they along with Lord Brahma beseeched Lord Shiva to come for their rescue to which Lord Shiva agreed. Tyrant Bhima asked Kamrupeshwar to worship him instead of Lord Shiva. When Kamrupeshwar refused, Bhima raised his sword to strike the Shiva Linga. But as soon as he raised his sword, Lord Shiva appeared before him in full magnificence. Then the terrible war began. Holy sage Narad appeared and requested Lord Shiva to put an end to this war. It was then that Lord Shiva reduced the evil demon to ashes and thus concluded the saga of tyranny. All the Gods and the holy sages present there requested Lord Shiva to make this place his abode. Lord Shiva thus manifested himself in the form of the Bhimashankar Jyotirlinga. It is believed that the sweat that poured forth from Lord Shiva’s body after the battle formed the Bhima River.

Apart from the Bhimashankar temple one can visit the Bhimashankar Wildlife Sanctuary which is home to a variety of endangered species of flora and fauna. The dominant species of flora are Mango, Hirda, Behda, various medicinal herbs, bamboo and fern. The Giant Indian Squirrel is one of the major attractions of the sanctuary. The other species found in the dense forests are Panther, Sambar, Mouse Deer, Hyena and the Wild boar

There are no hotels there. The local upadhyayas or priests make arrangements for the lodging and boarding of pilgrims at a small cost. Visitors are accommodated in either temporary hutments or in dharamshalas near the village. A new dharamshala is under construction.

The food is typically Maharashtrian available in stalls or dhaba type cafes. Basically vegetarian fare as in the temple surroundings.

One can trek to Bhimashankar too.

Bhimashankar is at a height of 3250 feet. Karjat is the nearest station from which the bus for Khandas can be taken (1st bus is at 10:00 a.m.). The 11/2 hour journey (approximately 40 Km.) will take you to Khandas. The summit can be reached either by Ganesh Ghat or Shidi Ghat. The climb via Shidi Ghat is a bit tough, but very enjoyable. Going through to the dense forest will take you to the top in around 4 hrs.

By road from Mumbai there are 2 routes 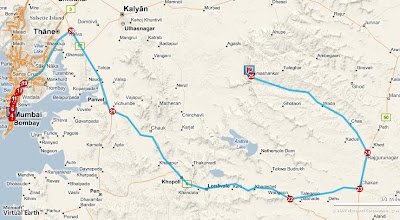