Dandeli is a quaint little town in Uttara Kannada district of Karnataka in North Karnataka, in the Western Ghats. It is best known for its wildlife sanctuary especially as a birding haven. 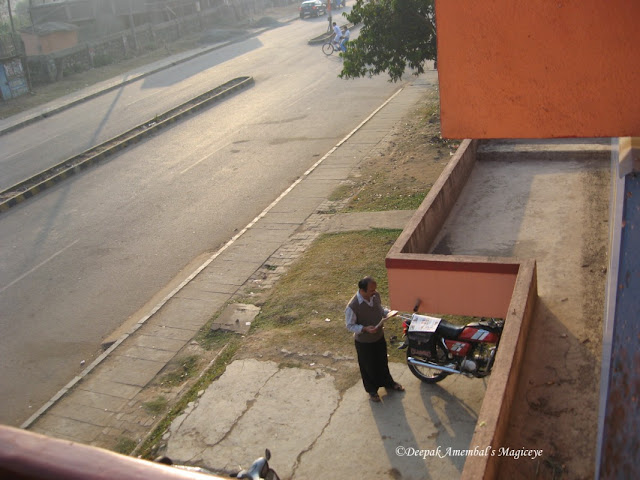 The forest in Dandeli is a typical moist deciduous and semi-evergreen type, with pockets of evergreens.
The main wildlife species include elephant, tiger, leopard, gaur, flying squirrel, mouse deer, Slender loris etc., and the main bird species include magpie robin, golden-backed woodpecker, crested serpent-eagle and a large variety of other birds.
We took the night KSRTC bus from Mumbai that dropped us off at Dharwad around six in the morning on Republic day. Mr.Kamath (local tour operator, restaurateur) from Dandeli had organised a taxi for us that
would pick us up from the drop off point , take us around during our stay and drop us back to the embarkation point in Hubli KSRTC bus terminus. We had booked a three night stay in the Karnataka Forest Department’s Kulgi Nature Camp’s tented accomodation. This was around 60kms from Dharwad and 12kms from Dandeli. The road upto Dandeli was nice and smooth but onwards to Kulgi was a rough ride.
Our check-in time at the Kulgi Nature camp was 12noon and since we still had plenty of time we were advised by Mr.Kamath to visit the Haliyal fort which is about 20kms from Dandeli.  So had a sumptuous 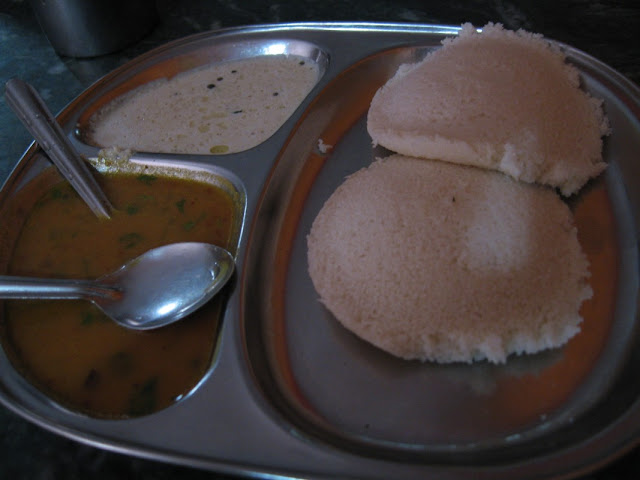 breakfast at Kamath’s and moved on to check out the fort. 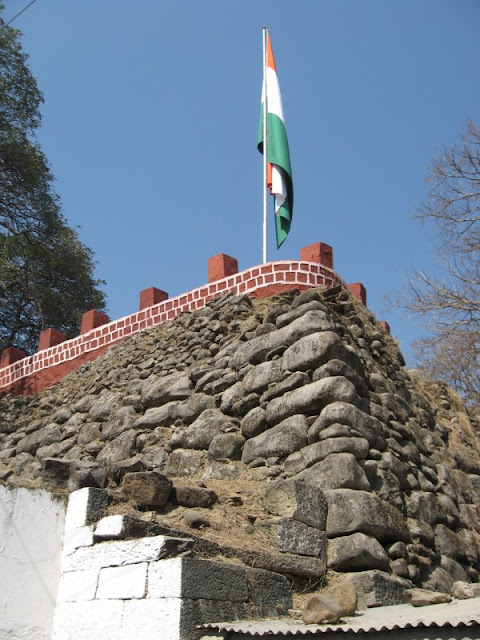 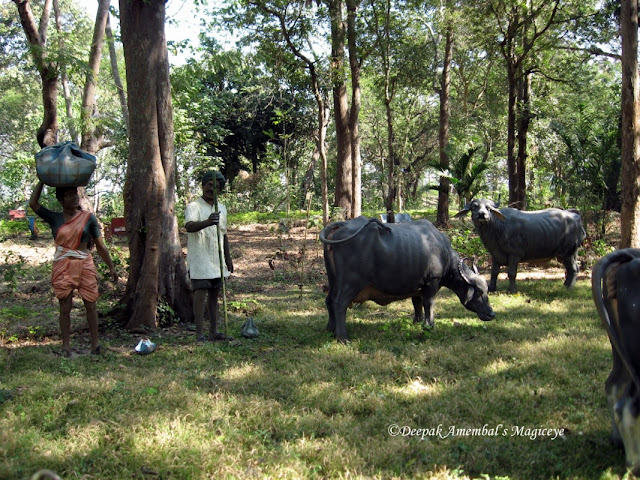 the ramparts.
There is a big lake behind the fort where we managed to spot quite a few birds as also in the fort premises

which has plenty of trees.
All this birding got us hungry and so decided to have a simple but hearty home cooked meal at a khanaval in 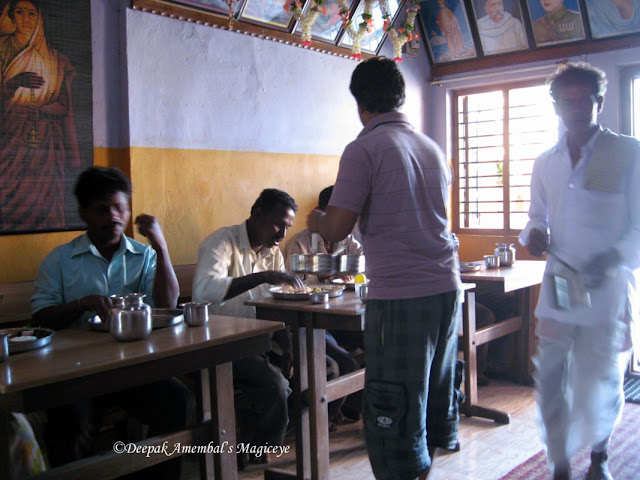 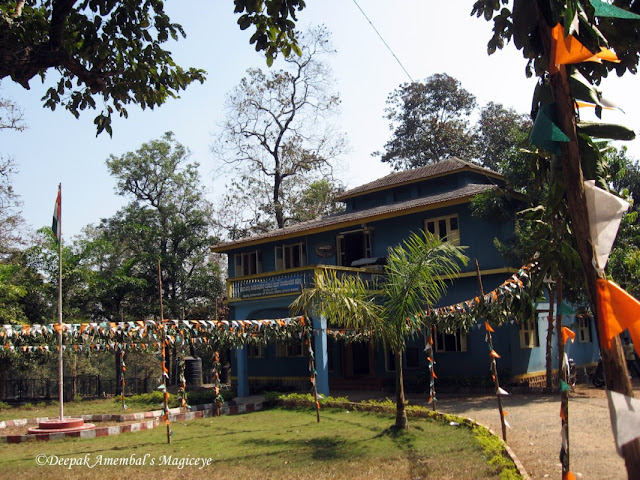 except for a handyman who helped us check in and gave us the key to our accomodation.

The tented accomodation in Kulgi Nature Park is very comfortable and has an attached toilet.
Next on our agenda prepared by Mr.Kamath was the Bomanalli back waters. It was a treat to watch flocks

of birds flying across the water from one end to another at regular intervals. But soon a group of young boys came along to frolic in the water and drove the birds away bringing to an end a fabulous spectacle.
The next morning session at the Timber depot in Dandeli which is a hotspot for hornbills was fogged out so 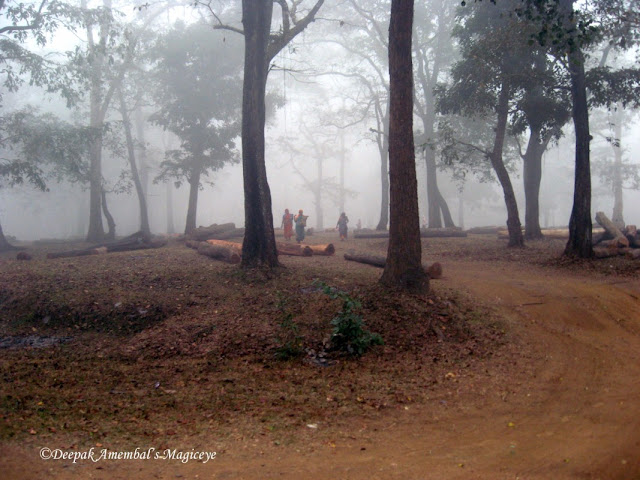 we came back to Kulgi and took to the designated birding trail not to be dissappointed. 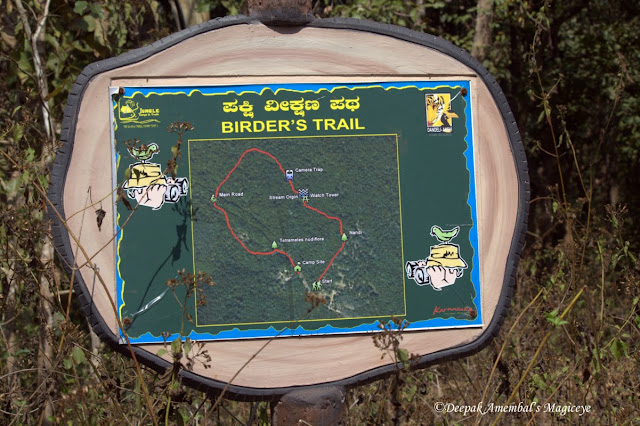 The afternoon too proved to be productive with the hornbills posing for us at the timber depot. 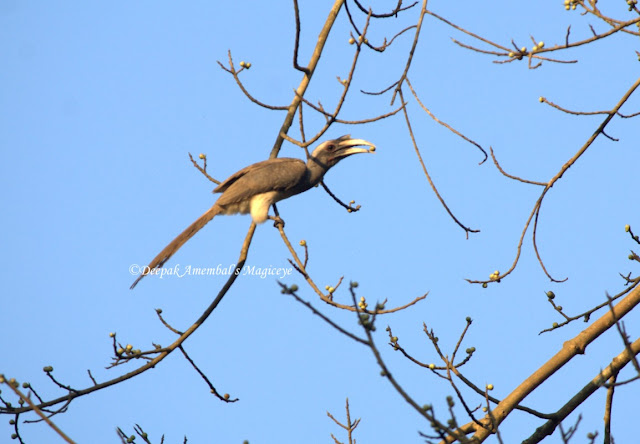 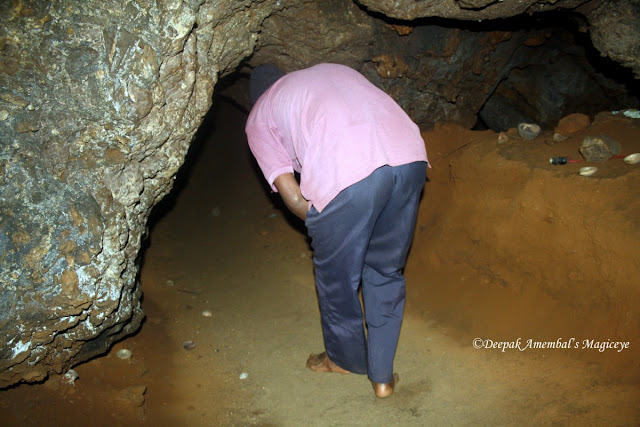 are located. These caves have been formed due volcanic activity and there are natural formations of the Shiva Linga inside due stalagmites formed by constant water dripping. The route through the caves is very 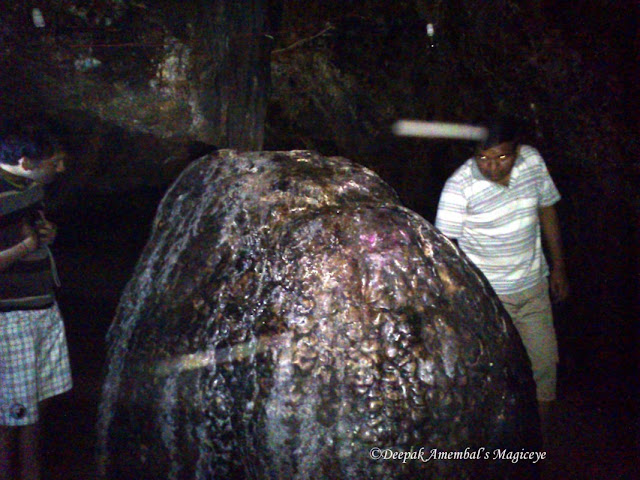 narrow and in most places one has to crawl on all fours. Carrying a torch is a must and so is a guide to ensure one does not get lost in there! Permission and guide has to be obtained from the Forest office at the sanctuary.
The only wildlife we saw in the forest was spotted deer and a bison.
The evening was spent exploring the Syntheri rocks. It is a 300ft tall monolith of granite located deep inside 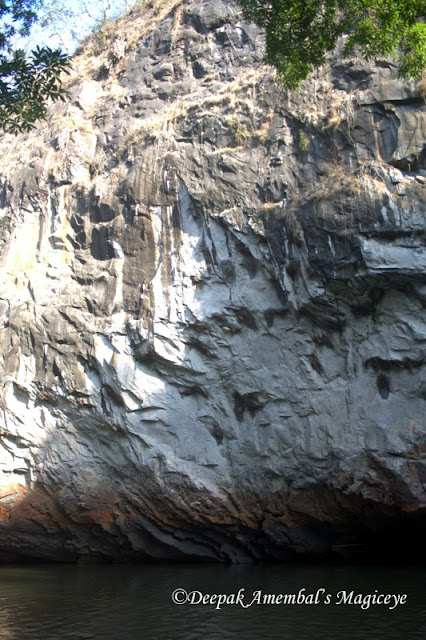 the thick Dandeli Wildlife Sanctuary about 15kms from Kulgi. With the Kaneri River gushing by its side, the 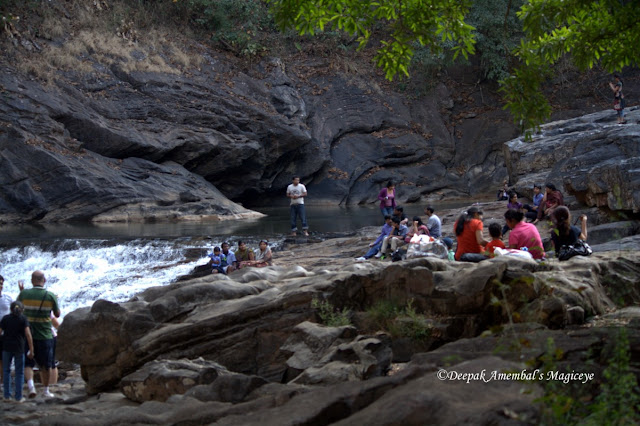 Syntheri Rock is a spectacular sight.
In the innumerable nooks and crannies thousands of pigeons have made their homes. We also see bee hives 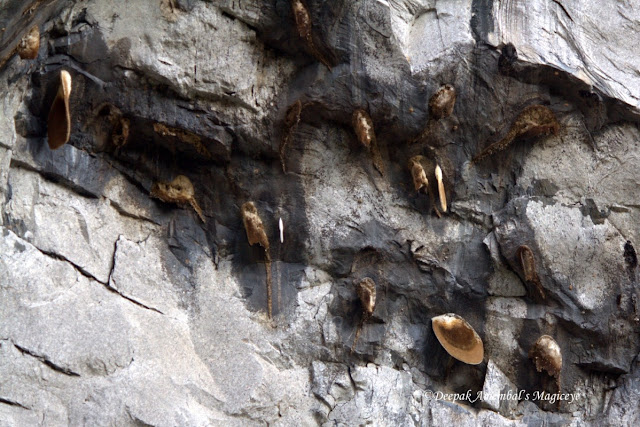 hanging dangerously on these rocks.
As our KSRTC bus back to Mumbai was in the late evening, after checking out in the morning, we went to 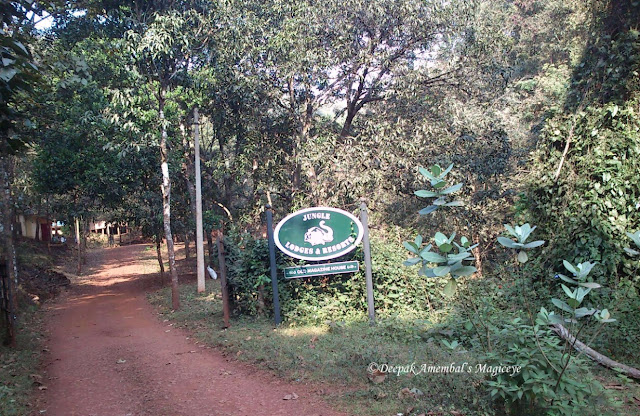 the Jugle Lodges Resort property at Ganeshgudi where they have developed an area very conducive to birding. They have 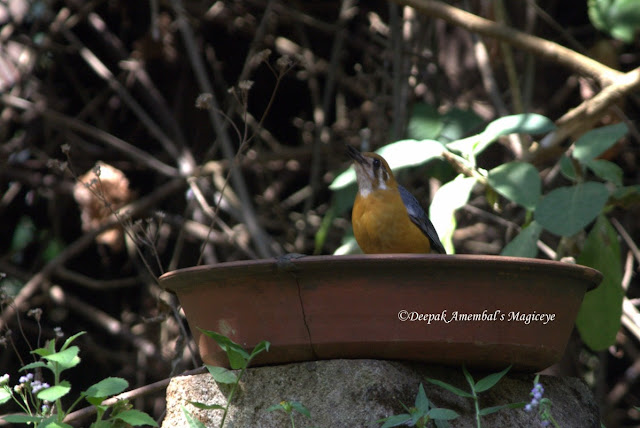 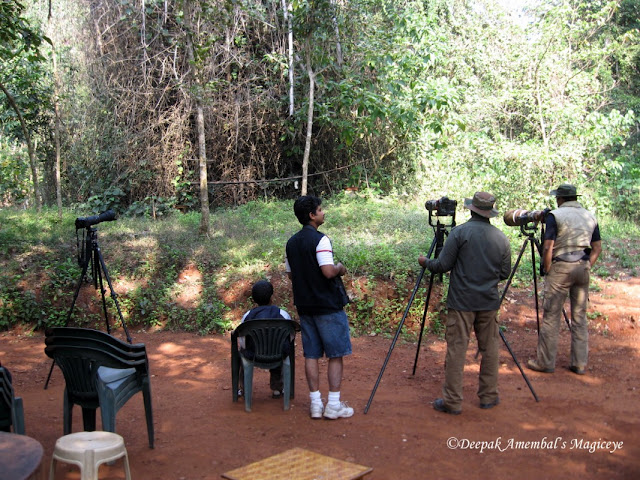 of birds. All one has to do is position oneself in that area and observe/capture with a camera the wide variety of bird life. We spent a full day there and they also have a restaurant there where you can lunch provided you give them a couple of hours notice.

Dandeli is well connected by road to nearby cities. It lies 55 km from Dharwad, 72 km from Hubli and around 115 km from Belgaum. Buses are run by the KSRTC and other private operators to Dandeli daily from Bangalore. The nearest airports are at Hubli, Belgaum, and Goa. The nearest passenger rail stations are at Alnavar, Londa, Dharwad and Hubli.
Mr.Kamath in Dandeli can be contacted on 08284-230573 or 09886838950/09916871772  for all travel/accomodation facilitation.

For a birder's perspective of Dandeli please visit Nandan Tavanandi's excellent blog at http://bit.ly/AkTTLk
Posted by magiceye at 1:36 PM 49 comments: