My 1st ride after 4 months of lockdown. It was a journey from Mumbai to the ourskirts where serenity reigned supreme. From Urban chaos to Serenity and back. Click on the link below to travel with me.

Did not interact with the locals. No stops enroute at chai tapris. Carried my own breakfast. Maintained social distancing.  Responsible travel.

Raigad is a hill fort situated in Mahad, Raigad district of Maharashtra, India. The Raigad Fort, formerly known as Rairi, was built by Chandraraoji More, the King of Jawali. It was then seized by Shivaji Maharaj who made it his capital in 1674 when he was crowned the King of the Maratha Kingdom which later developed into the Maratha Empire, eventually covering much of western and central India.

In 1765, the fort of Raigad along with Malwan in present Sindhudurg District, the southernmost district of Maharashtra, was the target of an armed expedition by the British East India Company.

In 1818, the fort was bombarded and destroyed by cannons from the hill of Kalkai. And on 9 May 1818, as per the treaty, it was handed over to the British East India Company.

The fort rises 820 metres (2,700 ft) above the sea level and is located in the Sahyadri mountain range. There are approximately 1737 steps leading to the fort. The Raigad Ropeway, an aerial tramway exists and takes only 4 minutes to reach the top.

The Raigad Fort was built by Chatrapati Shivaji Maharaj, Maharashtra and the chief architect/engineer was Hiroji Indulkar. The main palace was constructed using wood, of which only the base pillars remain. The main fort ruins consist of the queen's quarters, six chambers, with each chamber having its own private restroom. In addition, ruins of three watch towers can be seen directly in front of the palace grounds out of which only two remain as the third one was destroyed during a bombardment. The Raigad Fort also has ruins of a market which was accessible to horseback riders. The fort also overlooks an artificial lake known as the Ganga Sagar Lake.

Click on the link below for a short video of photographs I had taken during my visit a decade back.

Ranakpur Jain temple or Chaturmukha Dharana Vihara is a Jain temple at Ranakpur dedicated to Tirthankara Rishabhanatha. The temple is located in Ranakpur near Sadri town in the Pali district of Rajasthan.
Dharna Shah, a local Jain businessperson, started construction of the temple in the 15th century following a divine vision. Inspired by a dream of a celestial vehicle, Dharna Shah commenced its construction in 1389, under the patronage of Rana Kumbha, the then ruler of Mewar. The architect who oversaw the project was named Dwepa. There is an inscription on a pillar near the main shrine stating that in 1439 Deepaka, an architect, constructed the temple at the direction of Dharanka, a devoted Jain. The construction continued until 1458 CE. However, according to the audio guide provided to visitors to the site, construction lasted fifty years (and involved 2785 workers). Another source reports that construction continued until 1496, fifty years from 1446. The town of Ranakpur and the temple are named after the provincial ruler monarch, Rana Kumbha who supported the construction of the temple.

Click on the link below for glimpses of this marvelous temple I had captured during my visit a decade back.

Kumbhalgarh is a Mewar fortress on the westerly range of Aravalli Hills, in the Rajsamand district near Udaipur of Rajasthan state in western India. It is a World Heritage Site included in Hill Forts of Rajasthan. Built during the course of the 15th century by Rana Kumbha, occupied until the late 19th century, the fort is now open to the public and is spectacularly lit for a few minutes each evening.

Kumbhalgarh is situated 82 km northwest of Udaipur by road. It is the most important fort in Mewar after Chittorgarh Fort

The fort is among the largest fort complexes in the world, and the second largest fort in India after Chittor Fort.

Click on the link below to view a short clip of pictures that I had clicked during my road trip a decade back, of this magnificent fort. 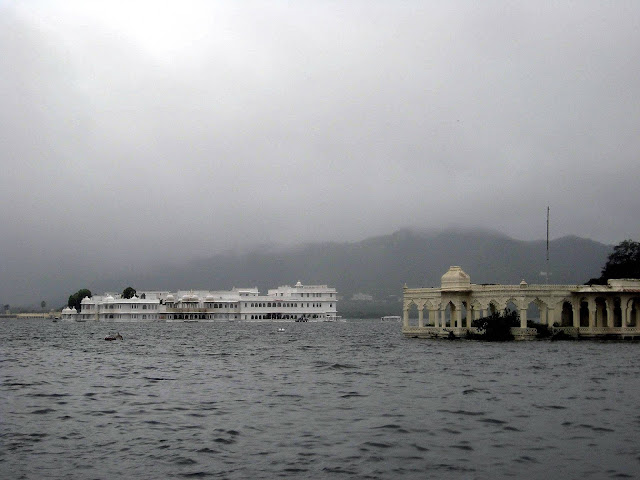 Solo ride to Vittal and back,

Mumbai – Vittal – Mumbai, a distance of just 1982 kms that I rode alone on my Royal Steed for a week in November 2019, has topped my personal best ride list, better than even the 72 day 14072 kms ride that I had done with Aditya Raj Kapoor or the week long Spiti ride that I did with Dr.Alap Mehendale, which were amazing to say the least.

This was a liberating ride for me. I had no peer pressure to keep up to any particular pace nor did 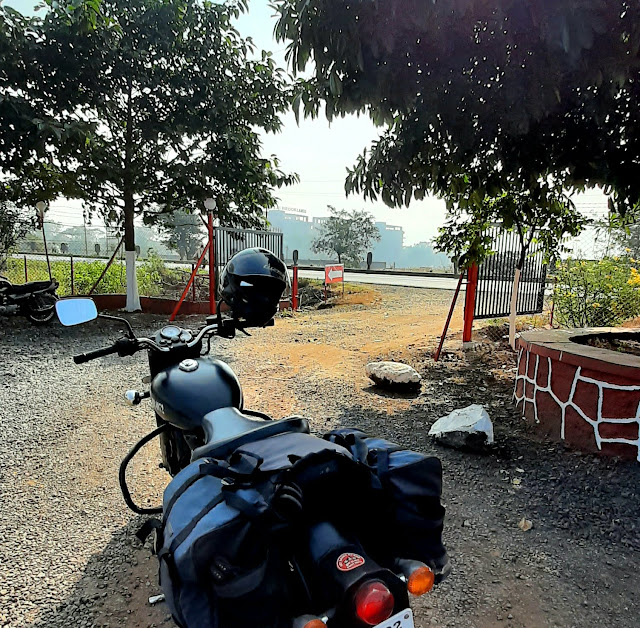 I have to keep up to the time table set up by somebody else. I stopped when I wanted to and rode when I wanted to at a speed that I thought was best suited to the moment. At the end of the ride I have no regrets on having missed out on capturing some lovely moments of the journey that I will cherish as I captured them all without feeling guilty of having trespassed on somebody else’s time.

I started off at 07.50 am, after a leisurely breakfast of Brun maska pao at home (Bandra east) and headed towards Kolhapur on a cloudy day that was perfect riding weather. Had a beautiful peaceful ride of 351 kms and checked in at Sai International Hotel at Yelur in the evening at 4 pm. 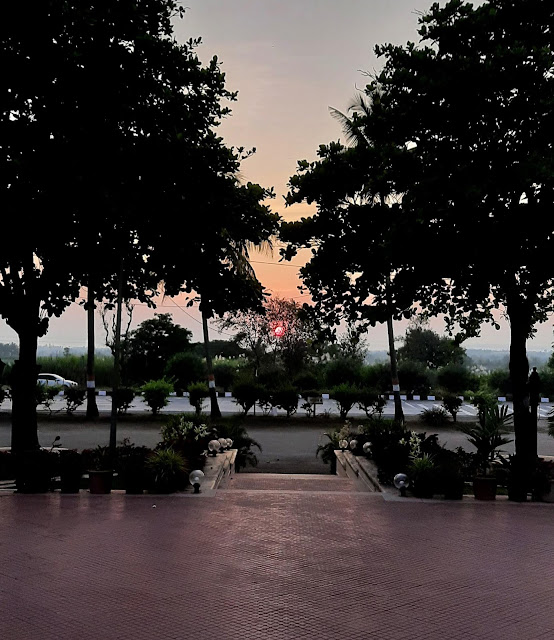 Witnessed a beautiful sunset, had a great dinner and rested well to set out next day for Sirsi, a distance of 333 kms. This was yet another great ride made fun and adventurous with Google maps which guided me on less travelled routes.

In Sirsi, I stayed at a chilled-out hotel that cost me just 700/-, opposite to the famous Marikamba temple. 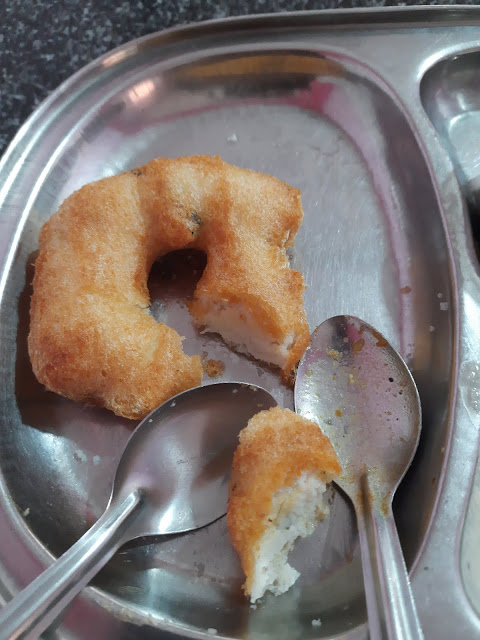 Once I crossed the border to Karnataka from Maharashtra, I realised that food and stay are amazingly value for money, yummy and inexpensive. Had some great medu wadas and a tummy filling thali before resting well for yet another day of riding to reach my destination Vittal, 300 kms away. 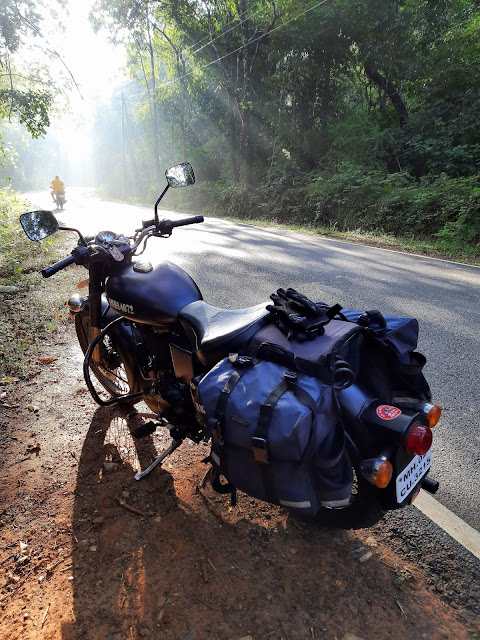 From Sirsi to Vittal it was riding in the mountains most of the time. Hence the tree shade was there to filter the sunlight and some amazing sights all along. Had my lunch in KSTDC’s Mayura restaurant in Agumbe. The Mangalore bonda was a meal by itself! 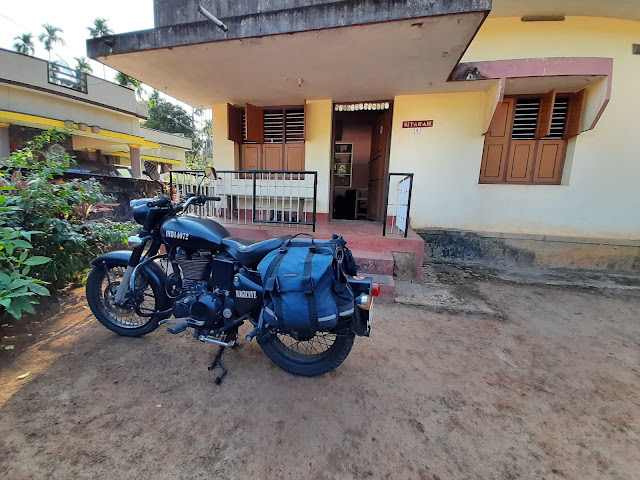 Reached home in Vittal in time for some yummy heavy snacks at 3pm. 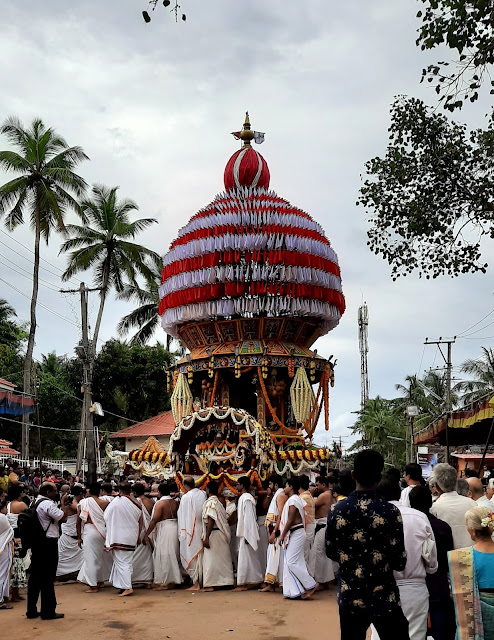 Had a wonderful week of temple festivities when the town comes alive to the drum beats, clarinets and saxophones climaxing in a Rath yatra.

Decided to return via the coastal route till Karwar before turning into the interior mountain roads to reach Belgavi. Rode via the patch of road with the sea on one side and the river on the other. Was a beautiful ride all the way to Karwar where I checked into a hotel recommended by a friend, had sea food that Karwar is famous for and started next morning after breakfast for Sai international Hotel in Yelur. This road via the ghats was bad in patches but nothing unmanageable and a great experience.

Had another restful night before starting out on the home run next morning. This route was all along the highway which would have been extremely boring if not for the diversions for ongoing work enroute, on the highway.

Reached home in the evening, feeling on top of the world.

Did my bit for the environment by not buying any plastic bottled water enroute. I kept refilling the bottle that I had carried from home, with purified water available in all the hotels I stayed in.