Drove down to Ujjain from Indore in an hour and checked in, in a lodge near the Mahakaleshwar temple. 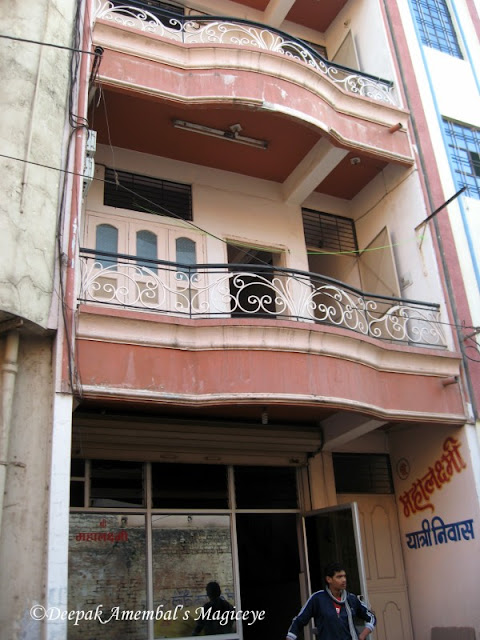 As we had just a day in Ujjain, decided to hire a guide refferred by the Lodge keeper.
Our first visit was to the Kal Bhairav temple which is famous for the liquor offering to the presiding deity of 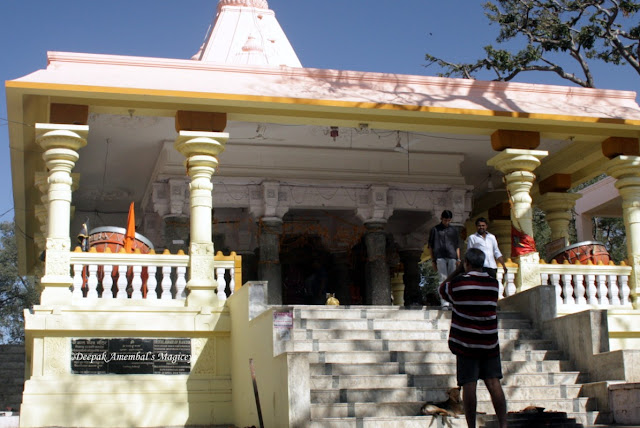 the temple. This temple is believed to have been built by King Bhadresen, on the banks of the river Shipra. 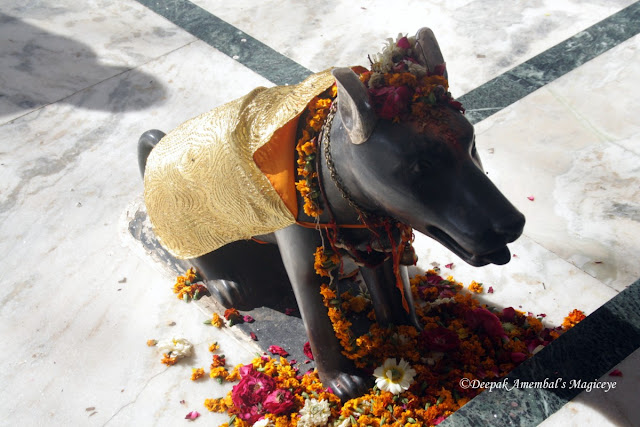 The dog is the vehicle of Kal Bhairav and is parked outside looking in at the diety. Apparently the dog is also worshipped as most of the devotees in the earlier days were hunters who were always accompanied by their loyal dogs. 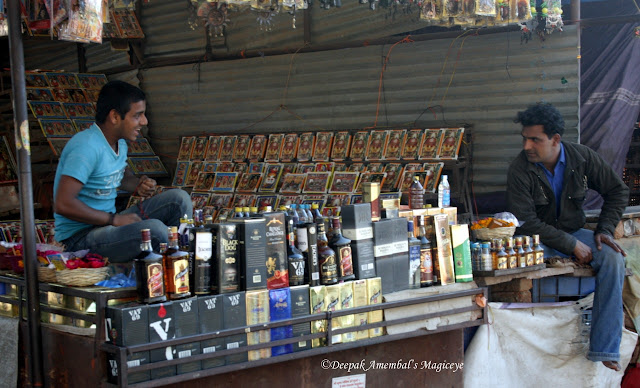 The street leading to the temple is lined with shops selling baskets of offerings to Kal Bhairav, containing 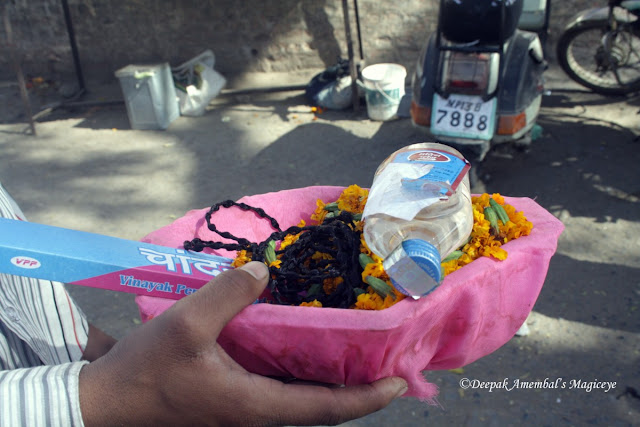 flowers, incence sticks and a bottle of liquor. The priest in the temple will open the liquor bottle, pour it on a 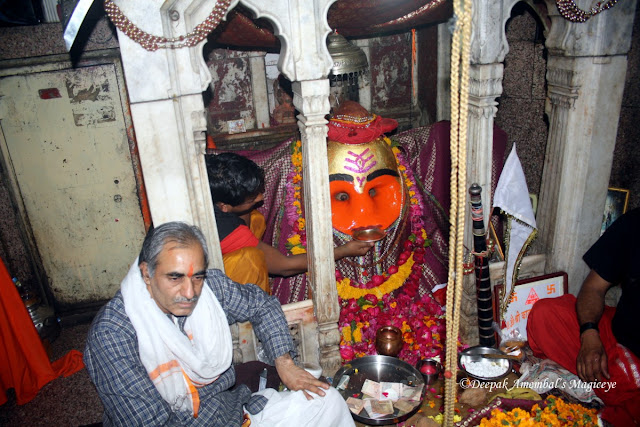 plate and hold it near the mouth of the deity for it to consume! Amazing practice!
After satiating Kal Bhairav we were led to Kaliadeh Palace. This too is on the banks of Shipra river. This 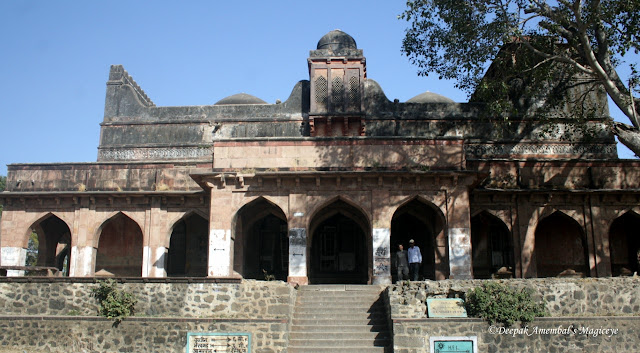 palace was destroyed by the Pindaris (horsemen, plunderers, or foragers attached to a Muslim army in India who were allowed to plunder in lieu of pay) and was restored by Madhav Rao Scindia in 1920. Unfortunately it is badly in need of further restoration. It seems there are Persian inscriptions in one of the corridors of the palace, which record the visit of Emperor Akbar and Jehangir to the site.
Now it was time to visit the most famous temple in Ujjain – the Mahakaleshwar temple. This temple 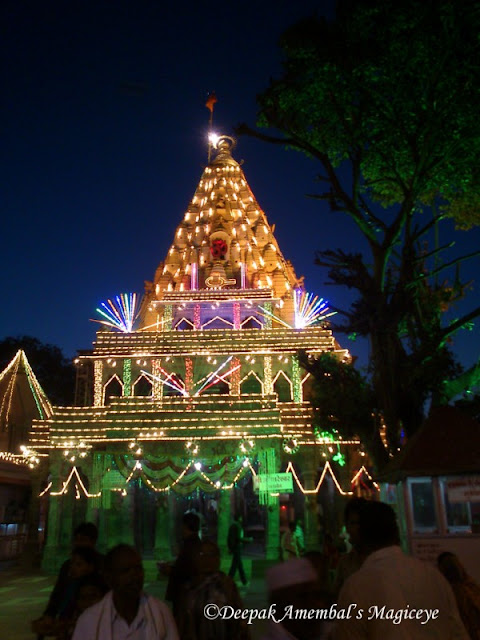 dedicated to Lord Shiva has one of the twelve Jyotirlingas. For the history and mythology of this temple please visit http://en.wikipedia.org/wiki/Mahakaleshwar_Jyotirlinga 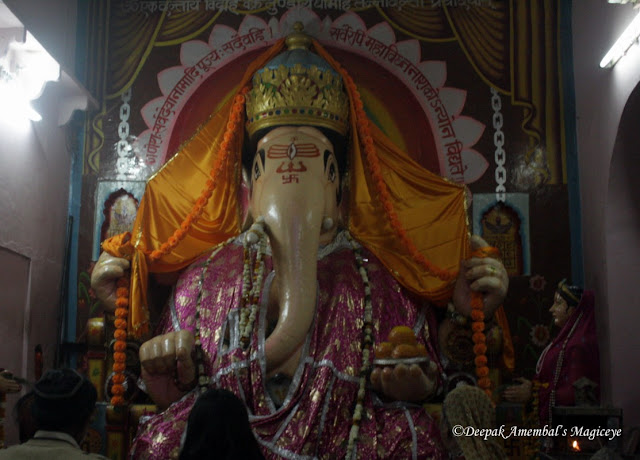 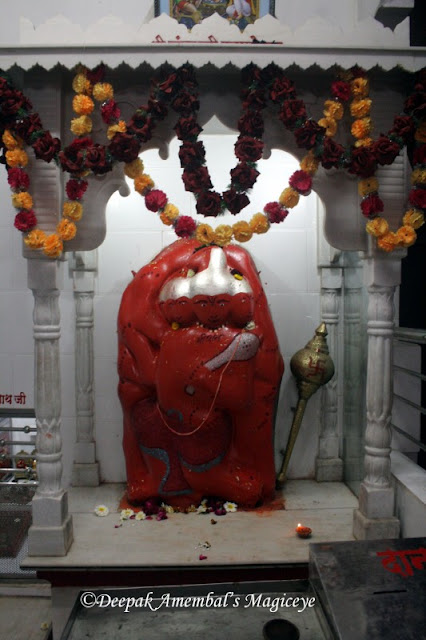 Hanuman.
Ujjain indeed is a spiritual city tempered by science as is evident from the presence of Jantar Mantar (an 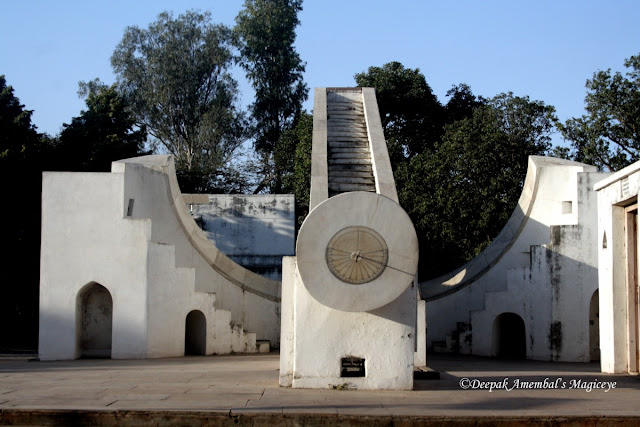 observatory that has instruments to measure time and planetary positions). It was built in the 1725  when Jai Singh was the Governor of Malwa under the Mughal Emperor, Muhammad Shah.

By Air : Devi Ahilyabai Holkar Airport in Indore is the nearest airport to Ujjain, which is situated 55 km away. Indore is connected to major cities in India by public and private domestic airlines.

Drove down from Mandu to Indore - the commercial capital of Madhya Pradesh. 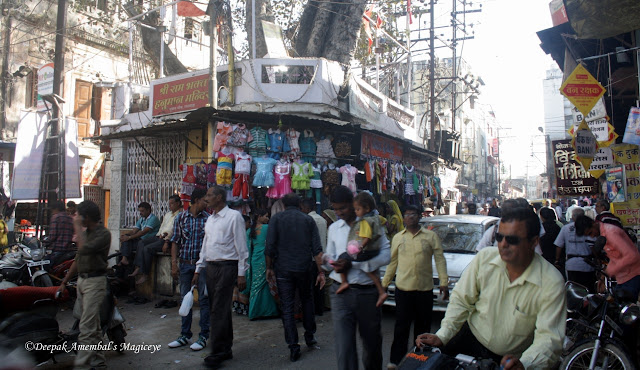 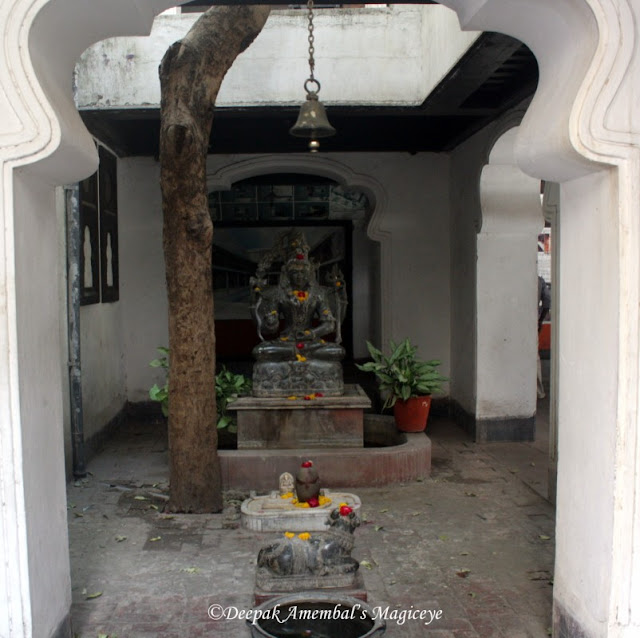 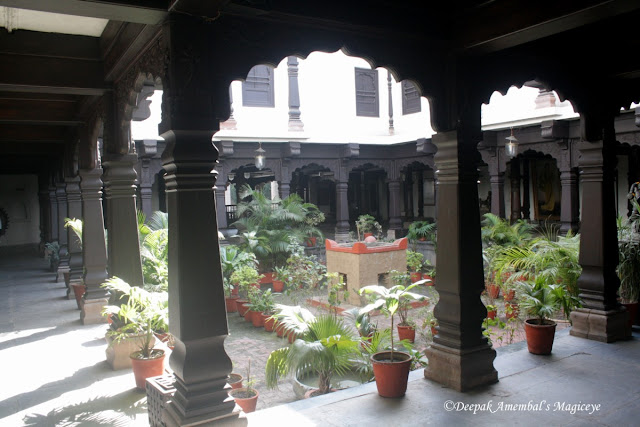 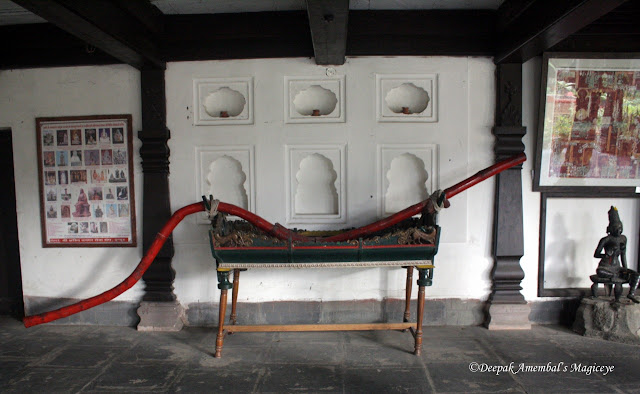 erstwhile royalty of Indore – Holkars. It is located just behind the Holkar Rajwada or Palace. 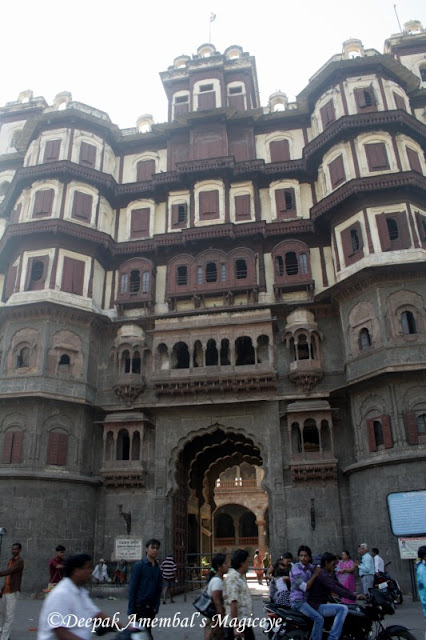 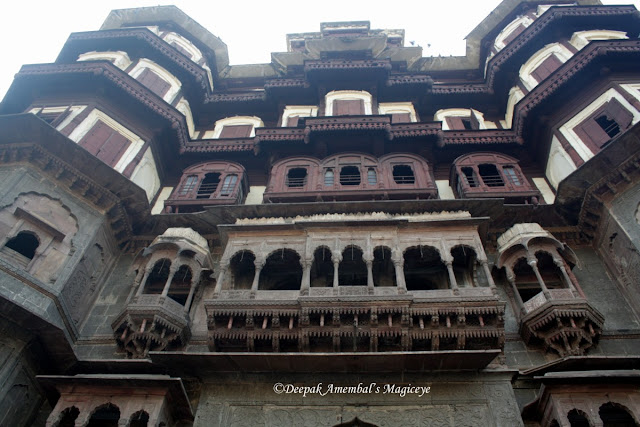 Nothing much to do in the palace as one can just roam around in the courtyard for a fee to take pictures which one can by standing at the entrance itself.
The Holkars are Hindus of the Shaivite sect and their principal deity is Khande Rao (Khandoba or Malhari Martand) of Jejuri, near Pune.

The emblem of the Holkars consists of a sun under a royal umbrella, a broad-sword crossing a lance over a wheat and poppy field in which a seated Nandi and a horse rearing are depicted.
Sun is the emblem of the Suryavamsi clans of Udaipur from whom the Holkars claim descent. The umbrella, besides being an emblem of State also refers to a legend bearing on the early life of Malhar Rao I, the 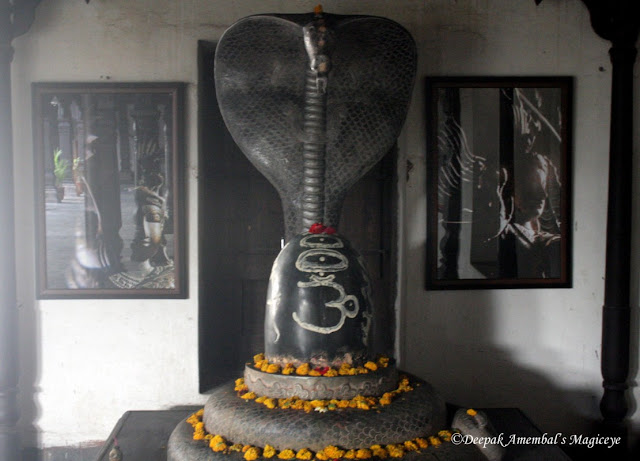 founder of this house, according to which a cobra once sheltered him from the sun, while asleep, by expanding its hood over his head. Nandi is the sacred bull of Shiva who is specially adored by the Holkars. The horse and sword being similarly emblematic of the warrior-god Khade Rao, an avatara of Shiva, and the tutelary deity of the family, whose chief temple stands at Jejuri near Pune. The Spear was the favorite weapon of the founder of this dynasty, while wheat and poppy were the principal products of the State. 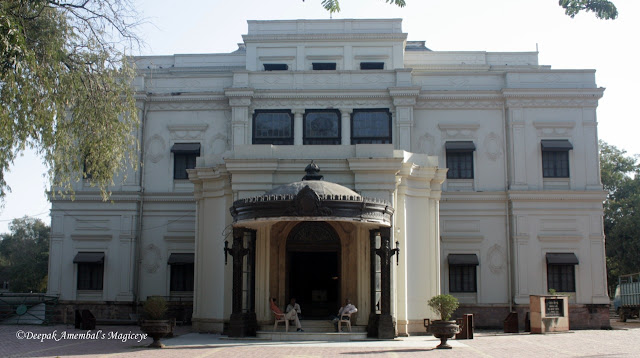 A few minutes drive away is the beautifully maintained Nehru centre that originally was the Lalbagh Palace of the Holkars.
All the delving into the past had our stomachs growling for food and what better place in Indore than

Chhapan Dukan which is a street lined with 56 shops selling savouries, snacks and sweets!
Indulged our taste buds and satiated our hunger.

By air: Indore is air connected to major cities in India by public and private domestic airlines.

By rail: Indore Junction Railway Station is an important railway station in Western railway zone. It is well connected to all major railway stations in India.
Posted by magiceye at 4:02 PM 26 comments: