Drove into Orchha in the afternoon from Jhansi.
Orchha was founded in the 15th century AD by the Bundela chief, Rudra Pratap Singh, who became the first King of Orchha.
History confronts you at every step from the minute you enter Orchha. Stay anywhere and you are bound to sight some palace or the other either from you room or from the roof top.

The first palace that we visited was the Raja Mahal. This palace was built by Rudra Pratap Singh. 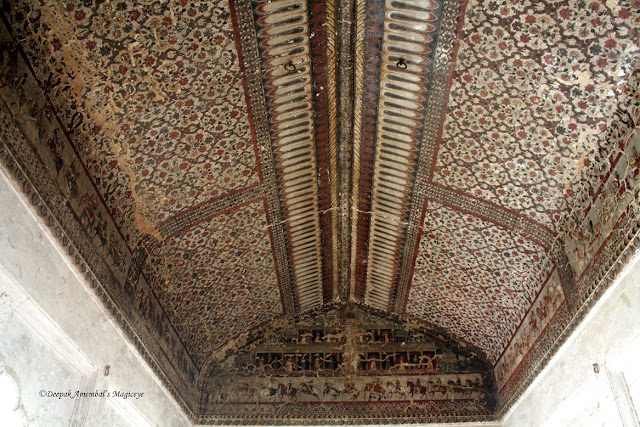 It has beautiful paintings on the ceiling and murals on the walls. Fortunately these paintings can still be seen in 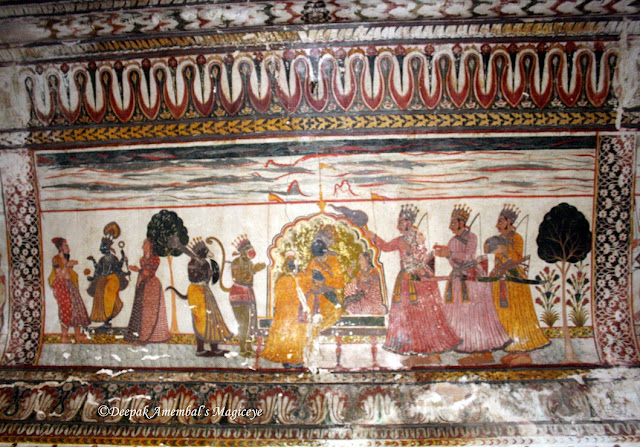 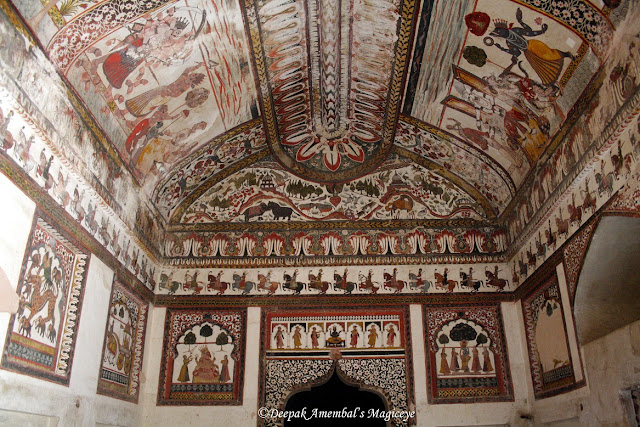 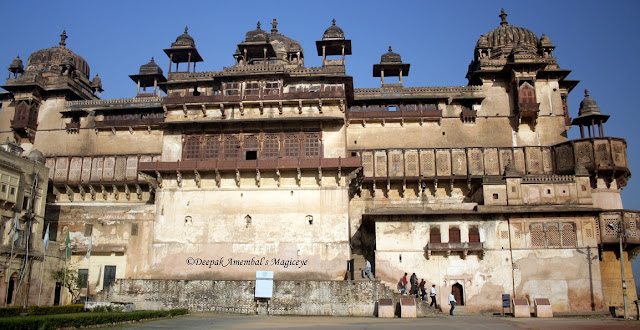 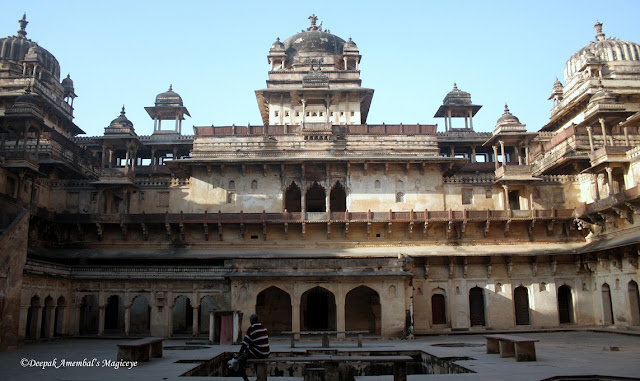 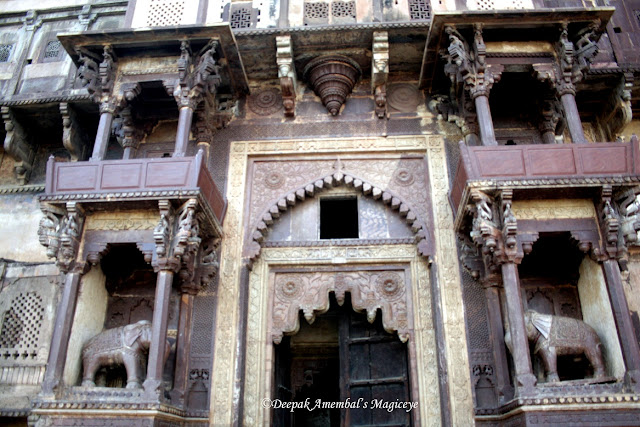 Jahangir) after defeating Vir Singh Deo of Bundela, a sworn enemy of the Mughals.
By the time we were through visiting these palaces it was evening and we were advised by our guide to go 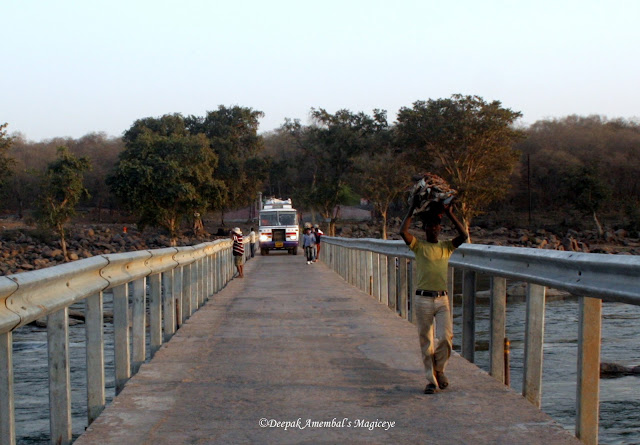 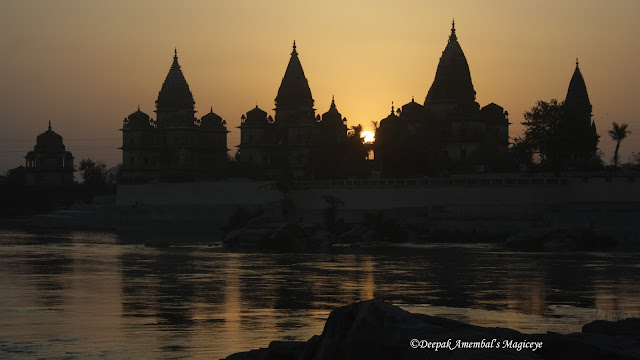 the rulers of Orchha.
Next morning it was time to visit the Chhaturbhuj temple dedicated to Lord Vishnu. It was built in 875, 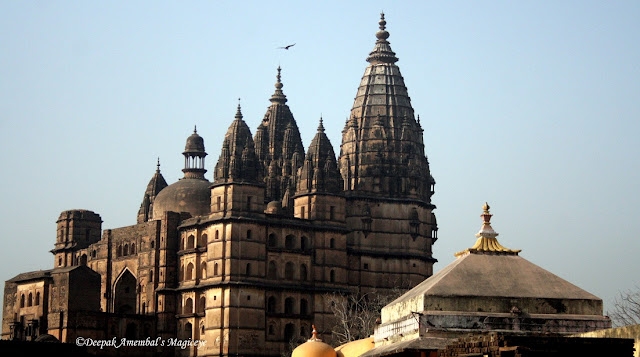 during the reign of imperial Gurjara Pratihara dynasty.

Adjacent to that is the Ram Raja temple. Both, the Chaturbhuj temple and the RamRaja temple have a fascinating myth. The King of Orchha, King Madhukar Shah Ju Dev was a devotee of Lord Krishna while his wife Kamla Devi, was a devotee of Lord Ram. One day both of them went to Lord Krishna’s temple but the temple had closed by that time.  They decided to join a group of devotees who were singing and dancing in the praise of lord Krishna outside the temple. Lord Krishna and Radha were so pleased that they too danced with them. After that incident, the King asked the Queen to accompany him to Mathura, the land of lord Krishna, but the Queen wanted to go Ayodhya , the land of Lord Rama.
The queen left the palace and started the long journey to Ayodhya (Rama's birthplace) on foot to bring Lord Ram with her to Orchha. She didn’t tell the King before leaving but she ordered her servants to start building a temple (Chaturbhuj Temple) for Lord Rama.
After reaching Ayodhya the Queen started praying to Lord Ram close to Laxman Fort near Sarayu river.. The queen fasted and prayed for about a month but Lord Ram did not appear, so eventually in despair the queen decided to jump in the Sarayu river. Just then something magical happened, Lord Ram appeared in child form in Queen’s lap.
The queen was ecstatic and began to cry. Lord Ram told the queen that he was happy with her prayers and she could ask for a boon, at which the queen asked Ram to come with her in child form to Orchha. Ram agreed to go but he put forth three conditions: 1) I will travel only in Pukh Nakshatra, when Pukh Nakshatra will end I will stop and resume only when Pukh Nakshtra sets in again. In this manner I will travel from Ayodhya to Orchha on foot along with a group of sages. 2) Once I reach Orchha, I will be the King of Orchha and not your husband. 3) Since child form of Ram would travel in Queen’s lap, the first place where you seat me will be my final place of stay and will be famous by the name of Ramraj".
The Queen agreed and started her journey to Orchha with baby Ram in her lap. Since the queen traveled only in Pukh Nakshtra it took them 8 months and 27 days to reach Orchha from Ayodhya on foot (between 1574 to 1575). King Madhukar Shah meanwhile had a dream where Lord Krishna scolded him on discriminating between Lord Ram and himselfand reminded the King that Lord Ram and he are one and the same, there is no difference. The King was very apologetic when he woke up and found out that the queen was returning from Ayodhya. The King went to receive the queen with horses, elephants, servants, food, etc. and apologized to the queen. The queen did not accept king’s apology and refused the comforts offered to her by the King. The Queen claimed that she now possessed everything one could ever ask for (Lord Ram in child form).
On returning to Orchha the queen went back to her palace with baby Ram and retired in her room for the night thinking she would take Lord Ram to the Chaturbhuj temple the next day. But according to Lord Ram’s conditions he took the first place where he was seated hence Lord Ram transformed into an idol and got transfixed in the queens palace itself. To this day the Ram Raja Temple is in the Queen’s palace and not in the Chaturbhuj Temple which is right next to the palace. Orchha is geared to cater to all tastes. It has a wide range of restaurants listed in Lonely Planet and these restaurants display that fact.

By Rail: Jhansi railway station, 16 km away from Orchha, is the nearest railway station. Jhansi is situated on the major rail route and there are regular train services to the major cities in India.

By Air: Gwalior is the nearest airport to Orchha (116 km) and is well connected to all major Indian cities.

By Road: Many private and Government Transport bus services are available to reach Orchha from Jhansi (16 km). Orchha is well connected by buses with Bhopal, Delhi, Varanasi, Khajuraho and Gwalior.

We reached Jhansi at around 11am on our way to Orchha. 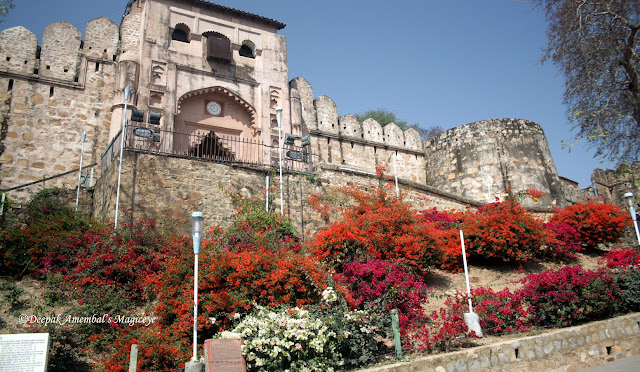 We visited the Jhansi fort which is very well maintained. It has a long and fascinating history that you can read here. 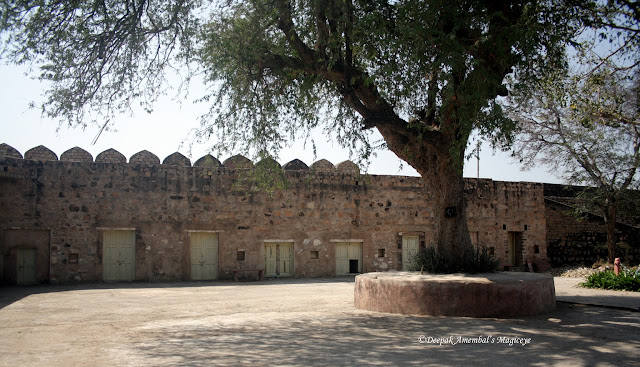 This fort was built in 1613 by Raja Bir Singh Deo of Orchha. It changed many hands before Rani Lakshmi Bai ruled Jhansi after the death of her husband and used the fort as her residence. 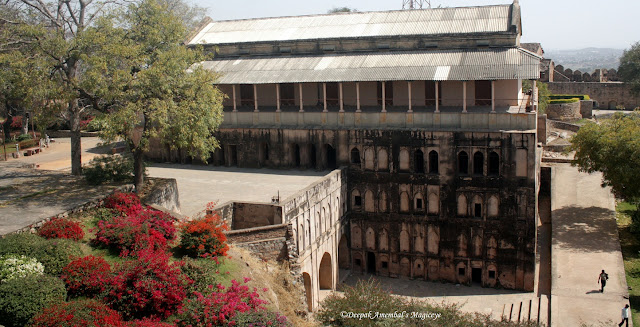 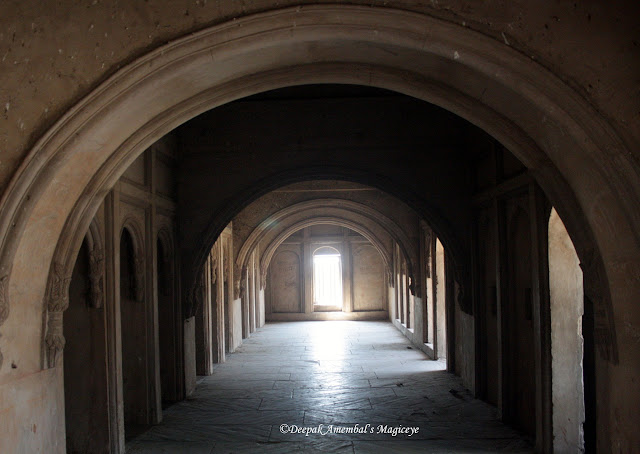 Along the walls of the fort

A view of Jhansi city from the fort

In 1858 she led forces against those of the British East India Company.  Jhansi was besieged by the forces of General Hugh Rose in March and April 1858; it was captured on 4 April 1858. Rani Lakshmi Bai was able to make a daring 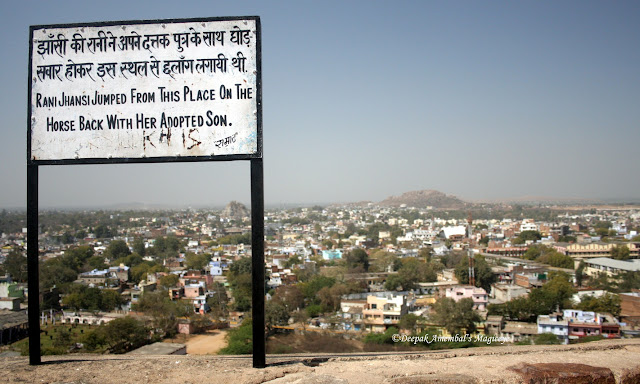 escape from the fort and the city when a British victory was imminent by jumping over the walls of the fort astride her horse with her son. 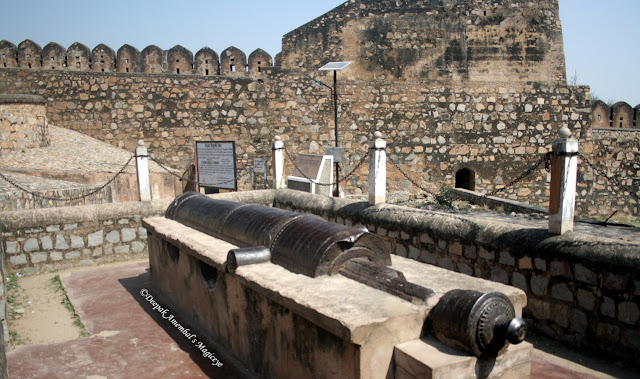 There is the Kadak Bijli cannon used in the uprising of 1857. The Central India Campaign was one of the last series of actions in the Indian rebellion of 1857, (also known as the First Indian War of Independence or Indian Mutiny).  At Jhansi, British officers, civilians and dependents took shelter in the fort on 5 June. They emerged three days later and were murdered by the rebellious sepoys and irregulars. Rani Lakshmi Bai had no complicity in this act but was nevertheless blamed by the British (the rebels were then the only armed force in the city and no British forces were there to oppose them).

How to reach Jhansi:

By train: Jhansi is well linked by Indian railways. Jhansi is an important railway junction in the Delhi-Mumbai route. Jhansi is connected to all major cities in India by rail.

By road: State public transport buses connect Jhansi with all major cities around Jhansi. Regular bus services are provided between Gwalior and Jhansi (103 km) and between Khajuraho and Jhansi (175 km). Deluxe private buses also ply between these cities.
Posted by magiceye at 6:47 PM 53 comments: