At a distance of about 400kms from Mumbai lies the quiet town of Pandharpur which bursts to life during Ashadhi Ekadashi when about a million pilgrims converge at the Vithoba temple for the annual festival. These pilgrims come walking in processions from as far as Dehu (250kms) which is the native place of Tukaram, Alandi (100kms) the native place of Dyaneshwar, the two renowned devotees of Vitthala (Vithoba). This pilgrimage is called the Vari and the pilgrims are called Varkaris. They take about 21 days to reach Pandharpur from their respective shrines carrying the Padukas (footwear) of the Saint in a Palkhi (palanquin). The chant of Jai Hari Vitthala will reverberate all through the route and all along the route, the villagers will look after the pilgrims by offering them place to stay and food to eat.
Somehow, due to various reasons, I have never been able to visit Pandharpur during the festival despite having wanted to participate in the procession at least for a couple of days. As a consolation, decided to drive down to Pandharpur a month before the festivities and get a feel of the place. The drive was beautiful meandering through sugarcane plantations and roads bordered with Banyan trees 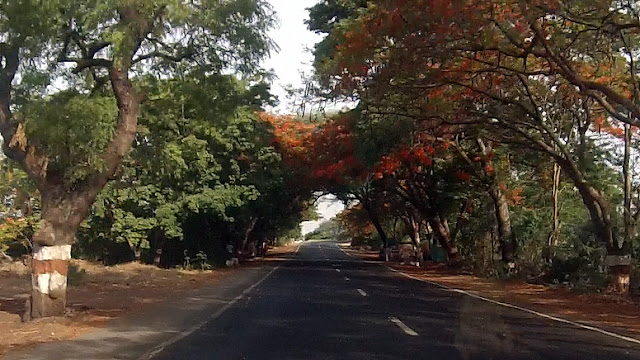 and Mayflower trees (Gulmohar) in full bloom. Took us about 7 hours to reach Pandharpur from Mumbai with mandatory rest breaks and safe driving.
Pandharpur still has not been crassly commercialised but half way there. There are very few hotels with airconditioned rooms (needed as the temperatures soar to 40+Celsius in summer) that one can book online. Managed to book one though it did not have a restaurant and you have to go to a restaurant about 10 minutes walk from the hotel. Was surprised to see an ice cream parlour there and obviously was ‘the meeting place’ for the young and happening kids around town. 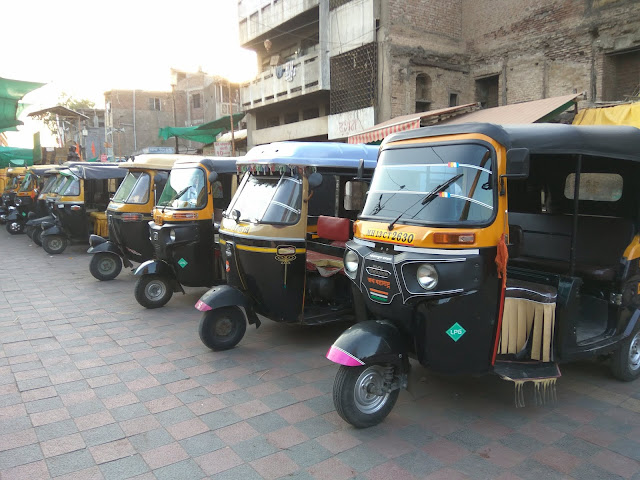 Hired an autorickshaw to reach the temple from our hotel at the standard rate of Rs.50/- one way, no meter. 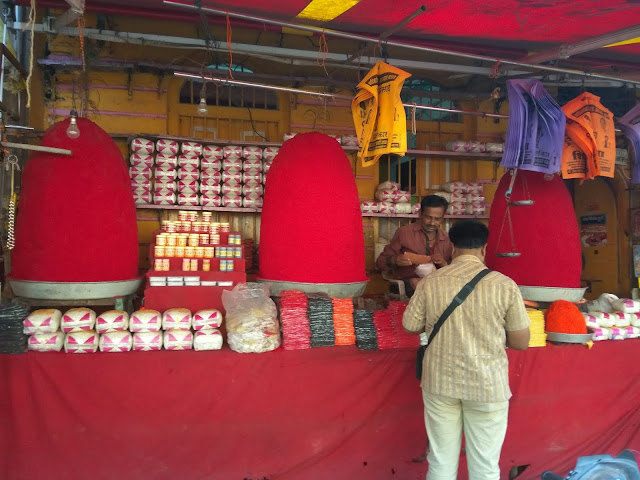 The walkway to the temple was flanked by shops selling offerings to Vithoba and Rukmini (Vithoba’s wife) who have separate temples next to each other. 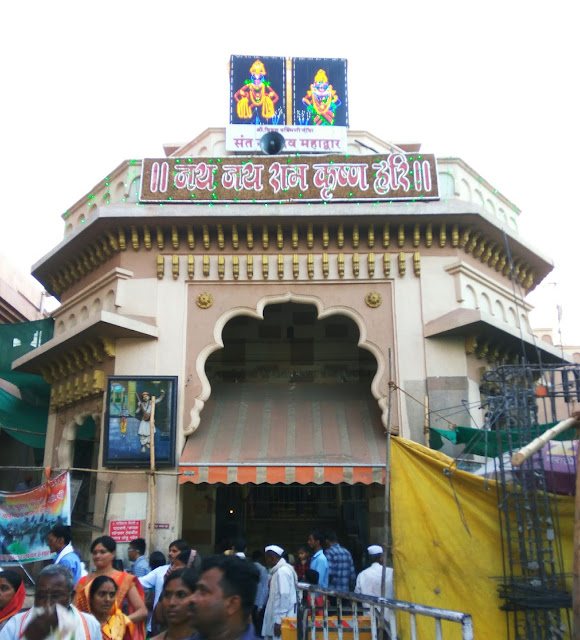 There are 2 ways for ‘darshan’ – ‘Mukh darshan’ (see the idol’s face from a distance of about 10 feet) and ‘Matha tek’ darshan (touch the idol’s feet with one’s head) and yes it is more popular. We preferred the Mukh darshan, as we would be done with it in 20 minutes, while the other one would take a couple of hours. No cameras allowed inside and no mobile photography too. You can keep your cameras in the lockers operated by private individuals in the periphery for a mere Rs.20/-. 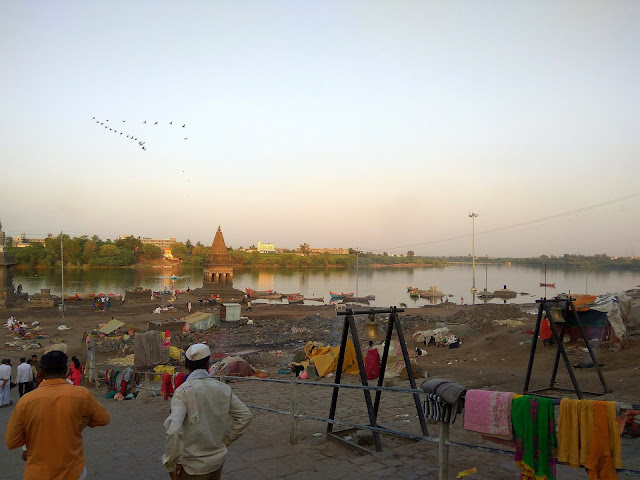 After the mukh darshan we went to the Chandrabhaga river that is just a couple of minutes walk away from the temple. There are plenty of temples along the way and the main one is Pundalik’s temple. 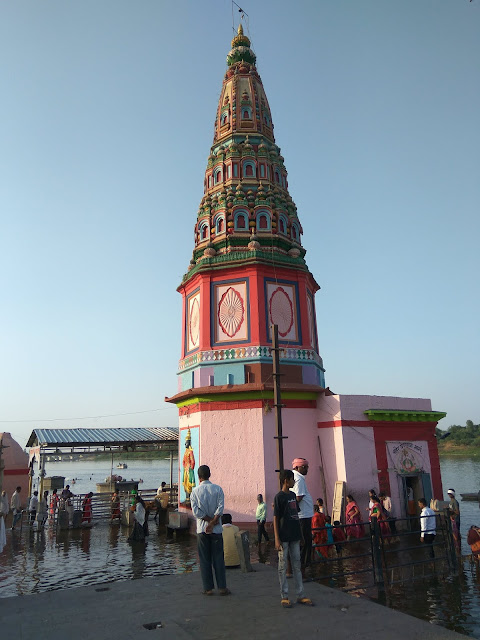 Pundalik is supposed to have been responsible for getting Vithoba to Pandharpur and is also the founder of the Varkari sect. For more detailed info about Pundalik click here and the story of Vithoba coming to meet Pundalik is here.

Incidentally most of the ‘Dabbawalas’ in Mumbai belong to the Varkari community. 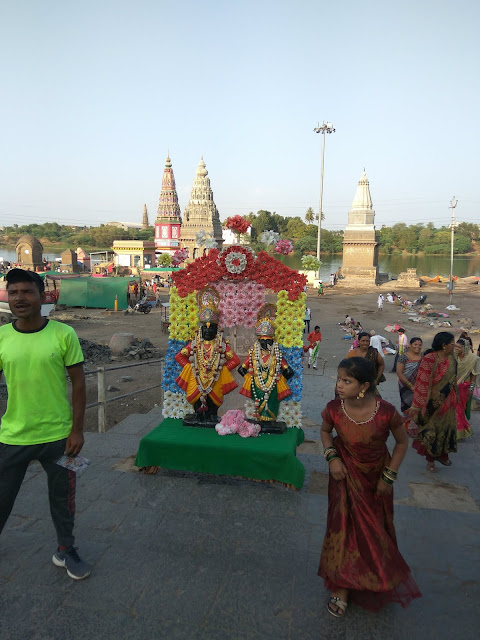 On the banks of the river there are enterprising young men who have modelled the replicas of Vithoba and Rukmini and you can get yourself photographed with the idols for a small price.
Then there are the boatmen who approach you to take you for a ride in the river, again, for a modest 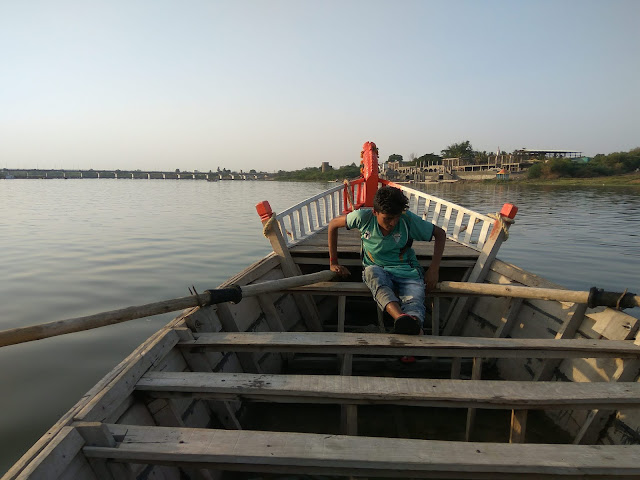 price. As he rowed he pointed out to a construction activity on the other bank and pointed out that as the upcoming ISKCON temple. It is expected to be completed in a year or two and once done, one can expect religious tourism all year round and the arrival of well heeled tourists demanding all the luxuries, and this peaceful town also, might go the Shirdi way, where now there are luxury hotels and an airport too. 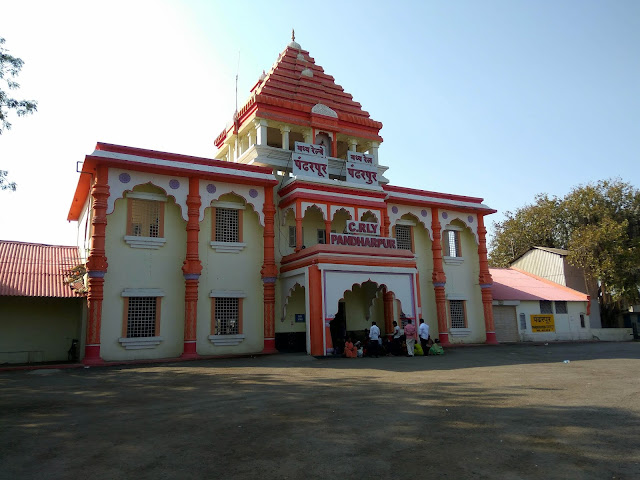 While in Pandharpur do visit the Railway station. It is built like a temple and looks beautiful. 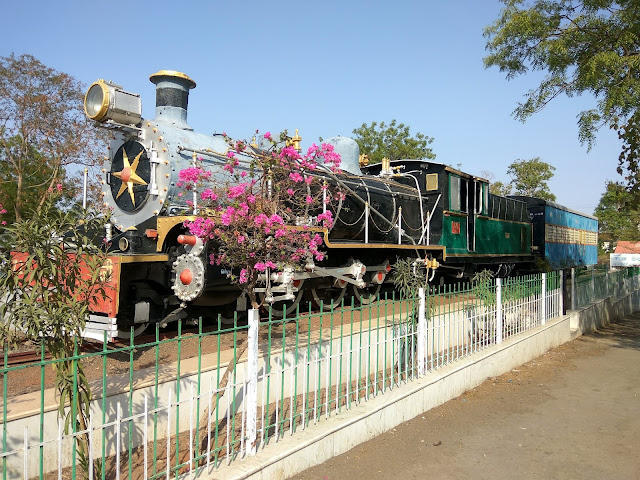 At the end of the day when we are done with our visit, we return with beautiful memories of a lovely pilgrim town that is relatively clean, physically and metaphorically too. I sincerely hope it remains this way.

Here is a short video of our road trip to Pandharpur.