In the heart of the Shekhawati region of Rajasthan lies the beautiful small town Mandawa, known throughout the state for its forts and Havelis.
It took us 3 hours to reach Mandawa from Bikaner, a distance of 190kms. The roads were good as usual.
Once we reached Mandawa, we maneuvered through narrow lanes to the ‘Hotel Heritage Mandawa’ we 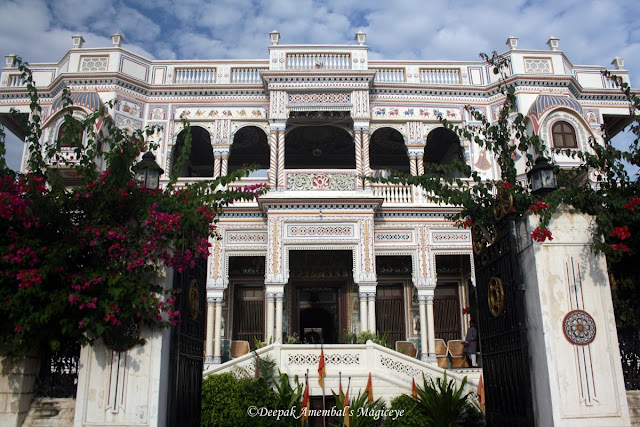 had booked in. It was fascinatingly wonderful. The frescoes on the walls and arches all over were impressive. Our room was ethnically decorated too. Had a delicious lunch and set out to explore the ‘Open art gallery’ of Mandawa. 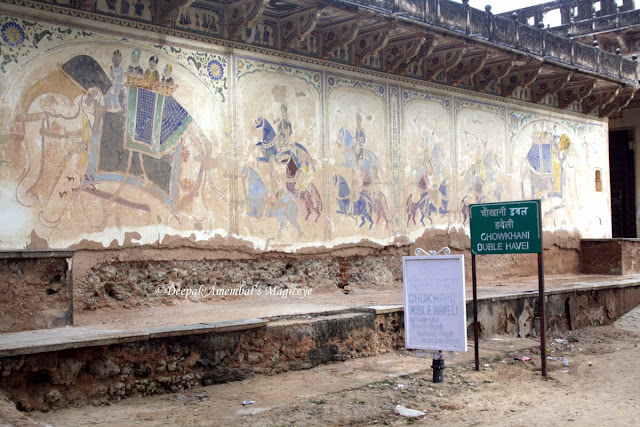 Founded in the 18th century, the medieval fort of Mandawa dominates the town with a painted arched 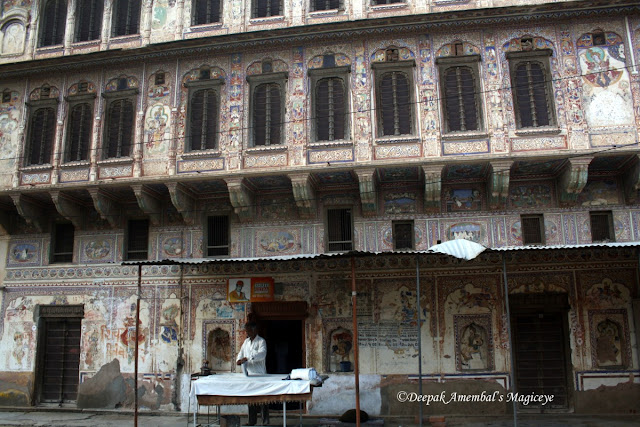 gateway adorned with Lord Krishna and his cows. The Chokhani and Ladia havelis and the street with Saraf 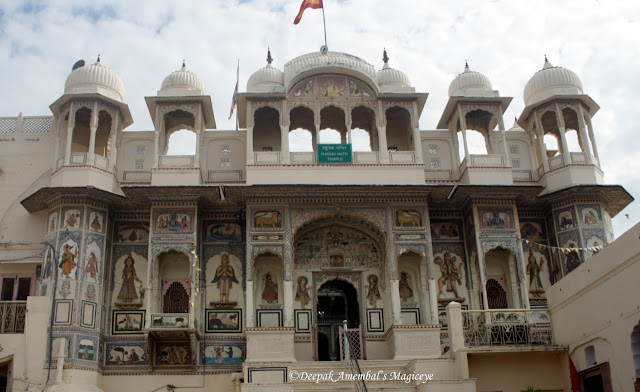 havelis are some of the splendid examples of this region's havelis. 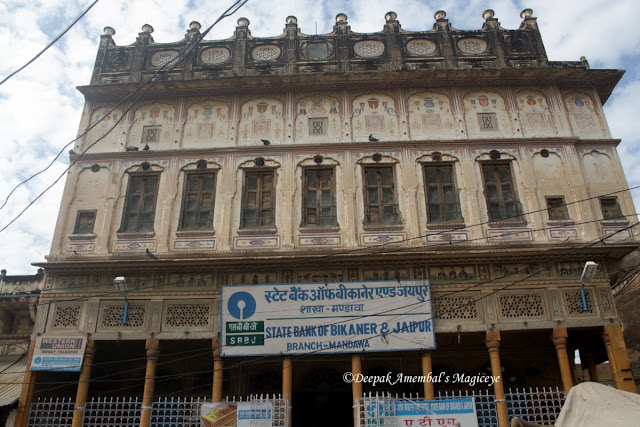 The historic town of Mandawa served as a trading outpost for the caravans coming from Middle East and China. It was in 1755 that the Rajput ruler, Thakur Nawal Singh got the Mandawa Fort and ramparts around the city constructed for the safety of the trading outpost. 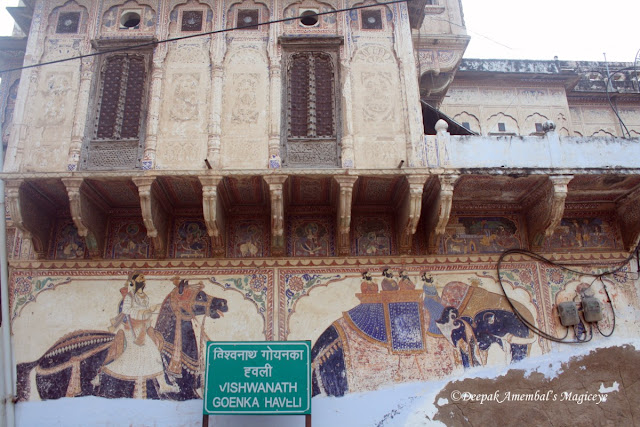 Displaying the skillful craftsmanship of Rajput artisans is the Goenka Double Havelis. The haveli is adorned by life-size portraits of the royal men, traditional Rajasthani women, and religious motifs. The Hanuman 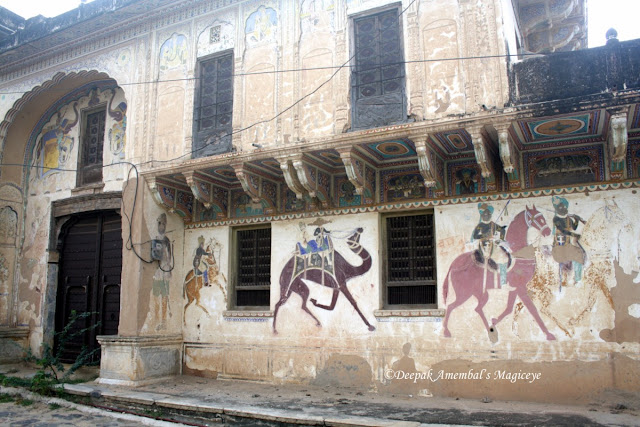 Prasad Goenka Haveli has religiously inspired frescoes, like Lord Shiva on Nandi and Lord Indra on his elephant. The Jhunjhunwala Haveli is famous for its intricately carved and painted ceiling and golden leaf 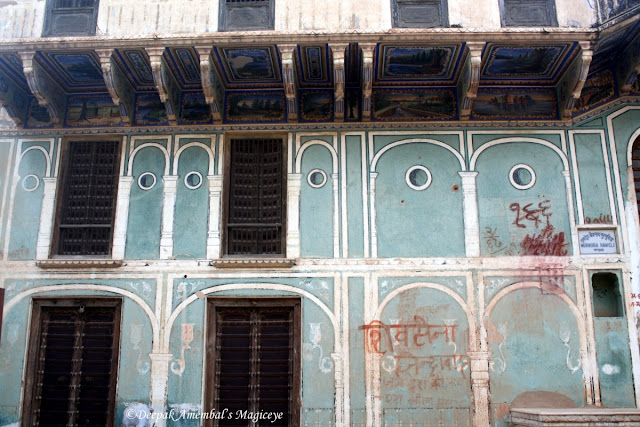 painted walls. Carved archways, latticed windows and intricate designs are found in Murmuria Haveli as well. Besides traditional frescoes and murals, the Murmuria Haveli has modern paintings also, like the one depicting Jawaharlal Nehru with the National Flag on a horseback. Mohanlal Saraf Haveli, Chowkhani Haveli, Bhagchandika Haveli, Gulab Rai Ladia Haveli, Lakshmi Narayan Ladia Haveli, and the Newtia Haveli are some other majestic havelis of Mandawa. 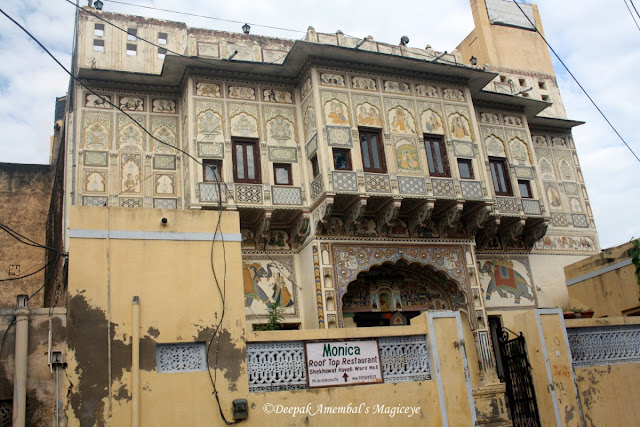 Had read a lot about Monica restaurant in Mandawa where we decided to dine. Weaving through dimly lit narrow lanes we managed to reach the restaurant and were ushered into an absolutely empty restaurant! Here too like most of the restaurants in Rajasthan the food catered to the Continental tastes. Despite asking for spicy food we got a taste of some sweetish Chicken tikka masala. Though this restaurant has a lot of good reviews on Trip Advisor, it is not suitable for the Indian palate.
Headed back to our haveli for a good night’s rest as we were headed to Jaipur next morning.

We covered the Jaisalmer to Bikaner distance of 333kms in just over four hours. The roads were excellent and it was a breeze driving through! Having reached Bikaner just in time for lunch had it in our room at the  Hotel Bharat Nivas where we had a booking.
Soon after lunch we set out to explore the most important sights of Bikaner – The Junagarh Fort and the KarniMata temple also famously known as the rat temple.
The Junagarh Fort was originally called Chintamani and was renamed Junagarh or "Old Fort" in the early 20th century when the ruling family moved to Lalgarh Palace outside the fort limits. It is one of the few major 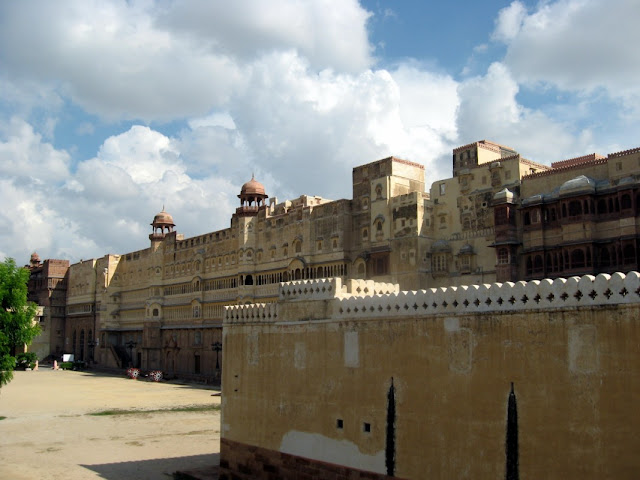 Photograph : Nakul Amembal
forts in Rajasthan which is not built on a hilltop. The modern city of Bikaner has developed around the fort.
The erstwhile Princely state of Bikaner and its capital city Bikaner was founded by Rao Bika (1465-1504 AD.) by the blessings of Goddess Karni Mata in the year 1488 AD. In those days this vast tract of desert country was called “Jangaldesh”. Prince Bika of the Rathore clan of Rajputs was the valiant son of Rao Jodha- the founder of Jodhpur. 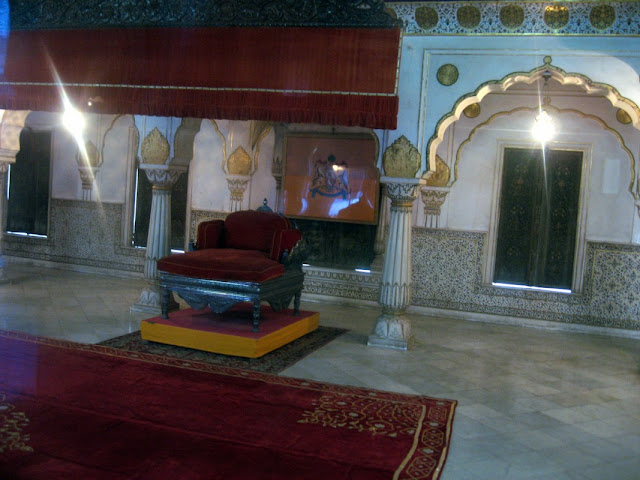 Photograph : Nakul Amembal
It is said that the success of Rao Bika was prophesized by Goddess Karni Mata, whose temple is at Deshnok, which is about 30 Km from here.There is another interesting anecdote about Karni Mata and Bikaner. In 1937, on the occasion of Maharaja Ganga Singh's Golden Jubilee, he cancelled all functions and festivities. He said "my Bikaner has a famine and this is no time for celebration". Weeks passed and the scorching heat only increased. In desperation Maharaja Ganga Singh went to the temple of Karniji at Desnoke to pray for rain. When all hope was lost, and the heads of villages had gathered, there mysteriously appeared a cloud, which soon covered the sky, and the heavens opened. Only when the parched land was drenched did he give orders for celebration. 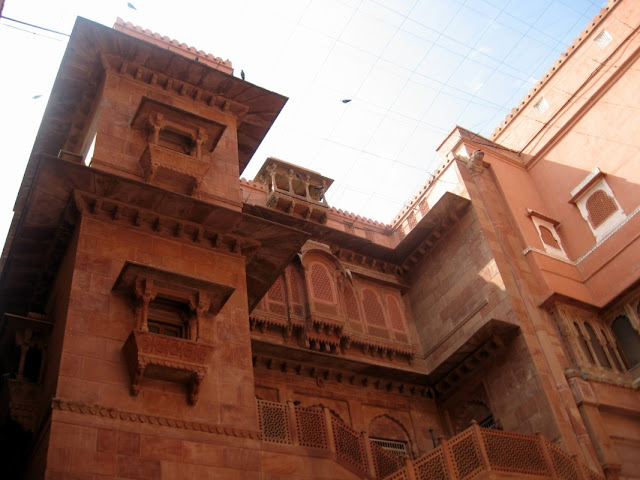 Photograph : Nakul Amembal
The Junagarh palaces in the fort have a large number of rooms, as every king built his own separate set of rooms, not wanting to live in his predecessors’ rooms.
The museum within the fort called the Junagarh Fort Museum was established in 1961 by Maharaja Dr.Karni Singhji under the control of "Maharaja Rai Singhji Trust". The Museum exhibits Sanskrit and Persian manuscripts, miniature paintings, jewels, royal costumes, farmans (royal orders), portrait galleries, costumes, headgear and dresses of gods’ idols, enamelware, silver, palanquins, howdahs and war drums. The museum also displays armoury that consists of one of the assorted collection of post medieval arms.
Refreshed ourselves in the cafe on the lawns of the fort and moved on to the Karni Mata temple which was around 30kms away. Reached there in an hour.
Karni Mata (2 October 1387 – 23 March 1538) was a female Hindu sage born in the Charan caste and worshiped as the incarnation of the goddess Durga by her followers. She is the official deity of the royal 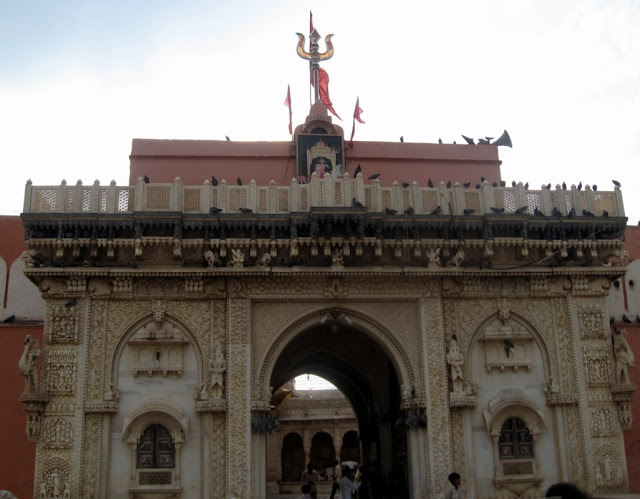 Photograph : Nakul Amembal
family of Jodhpur and Bikaner. During her lifetime, she laid the foundation stone of two of the important forts in Rajputana. She lived an ascetic life, and most of the temples dedicated to her were dedicated during her lifetime. A temple dedicated to her during her lifetime differs from others in that it does not contain an image or idol of her but rather contains a foot-print to symbolize her visit to that place. The most famous of her temples is the temple of Deshnoke, which was created following her mysterious disappearance from her home. This temple is famous for its rats, which are treated as sacred and given protection in the temple. 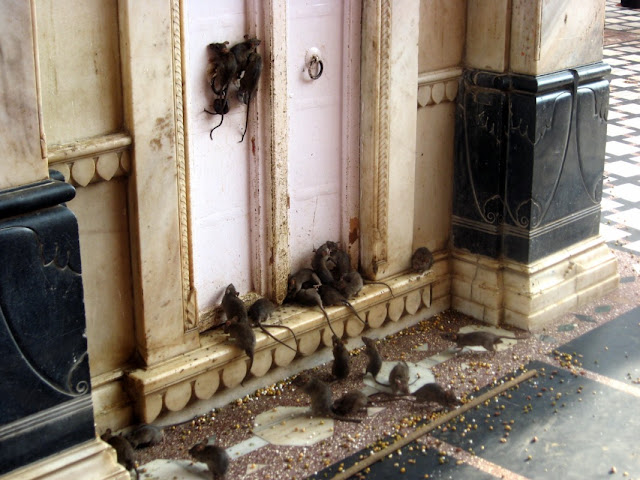 Photograph : Nakul Amembal
According to a local legend, Karni Mata, the 14th century mystic and an incarnation of Hindu goddess Durga, implored Yama, the god of death, to restore the life of the son of one of her storyteller. Yama refused, and Karni Mata reincarnated the dead son and all of the storytellers as rats, under her protection. Out of all of the thousands of rats in the temple, there are said to be four or five white rats, which are considered to be especially holy. They are believed be the manifestations of Karni Mata herself and her kin and hence sighting them is considered a blessing. We could not.
Now it was time to go around Bikaner city and try out their famous savouries. We  shopped for the savouries at 'Bhikaram Chandmal Bhujiawala' on the advice of our Hotel reception and picked up quite a few packets of the famous Bikaneri Bhujiya which is fun to have with chai.
Got back to the Hotel for the night to ready for our trip next morning to Mandawa the city of Havelis.