Vapi to Kapurthala in My 2wheeler Odyssey

The rains which had blessed our departure from Mumbai continued to keep us wet and blessed right through for a few more days with breaks that were few and far between. It was like a long wet dream (pun not intended). Vapi to Kalol was no different except for the thankfully great roads in Gujarat which made a wet ride pleasant. We reached Kalol in the night and missed a turn to get to ‘Hotel Planet’ booked by HV Kumar and his team. But we were alerted by HV Kumar about our wrong turn and we rerouted to reach the Hotel like wet crows looking for shelter. Had a quick dinner and turned in to ensure a bright start next morning. 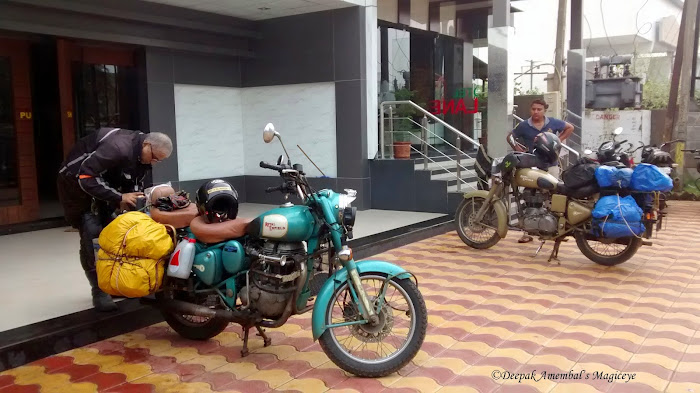 Fortunately it was not raining when we left Kalol. Our destination for the day was Barmer in Rajasthan. A very distinctive memory of this ride was passing through ‘Unjha’ which is called ‘Spice Town’. It truly lived up to its name as we could inhale the strong aromas of different spices as we rode through the town despite our full face helmets. 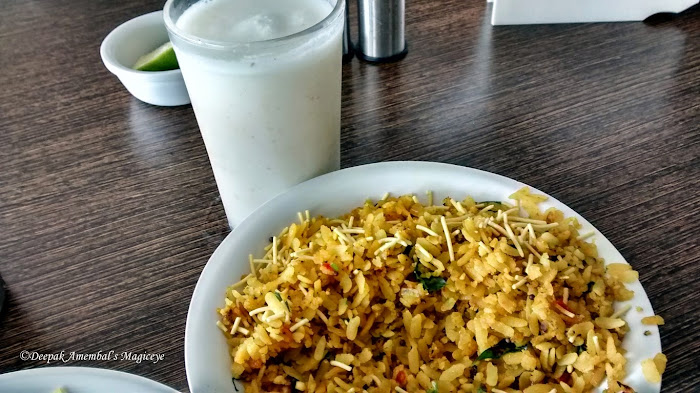 We took a chai poha break in one of the ‘Milestone’ restaurants which also have clean restrooms. 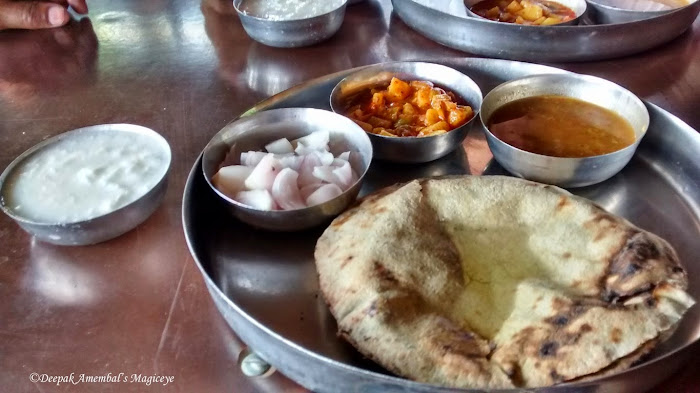 Our lunch was a typical Rajasthani thali in a dhaba near Sanchore. It was delicious. Loads of ghee was poured on tawa fresh rotis. The aroma of the ghee on rotis and the vegetable curries was heavenly and made us want to sleep for a while which we could on the ‘khatias’ provided.
Then it was an uneventful ride to Barmer where we checked into ‘Hotel Kalinga Palace’. We put up

all our wet clothes up to dry across the room, ordered room service for dinner and slept the night away.
Next morning we set out for Bikaner. We deviated slightly from the oft taken route and rode on a

road literally less travelled. There was barely any traffic and it was, well, deserted. For miles together, there was nobody, no tea shop, no dhaba. Finally in the distance we spied a structure resembling a chai shop and promptly rode in for a cuppa to refresh ourselves. And yes even in this ‘desert’ the rains did manage to keep us wet by dropping by occasionally. As we parked our bikes we saw a young lad who was sitting out on one of the charpoys, get up and run inside. Thinking it would be to announce with joy the arrival of two customers, we walked towards the shack and waited for someone to appear so that we could place our order. Since nobody appeared, Aditya went inside to check and apparently he again saw the young lad run behind the shack. Aditya followed him to see what he was upto. 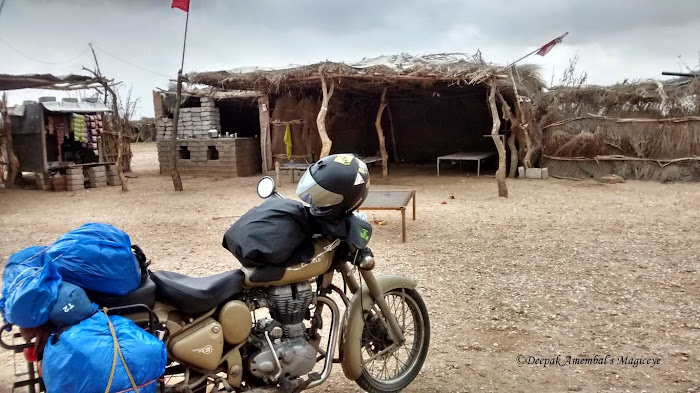 Meanwhile a jeep appeared and the driver got off and almost ran towards the shack, stopped on seeing me standing there and asked what I wanted. I told him that we were here looking for the refreshing cuppa chai and he laughed a hearty laugh. By the time he finished laughing, Aditya too had come up front. Slowly the man revealed to us what had happened. The boy, on seeing us all dressed in black, mistook us for dacoits/terrorists and ran behind to alert his uncle about us. And as soon as he received our call he had sped in to rescue his nephew from two harmless riders! Promptly the tea was prepared and served to us and they refused to take any money for us. The ‘rescuer’ said it was his contribution to our ride which he hoped to do someday in his jeep.
By the time we reached Bikaner it was dark, raining, and the streets of Bikaner were flooded. Alongside the road we saw what looked like a hotel and as we were in no mood to go further, we 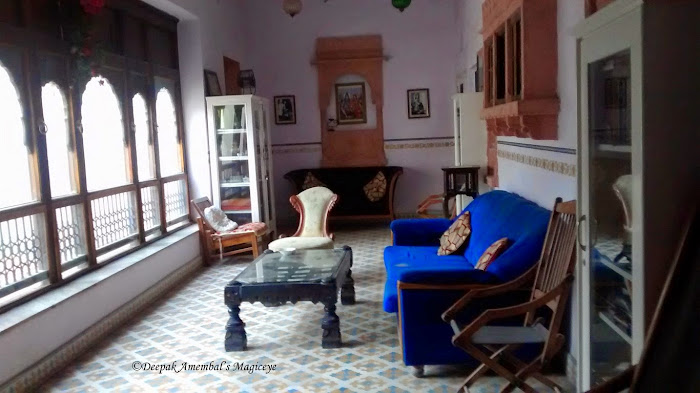 rode in and found out that it was indeed a Haveli turned into a Hotel! The room was huge and the owner promised us the famous Rajasthani ‘Lal maas’, home cooked for dinner! We had no option but to oblige and it was one of the most delicious meals since we had left home.
After a restful stay, we headed for Sri Muktsar Sahib Gurdwara in Punjab.
It was almost evening by the time we entered Punjab and the aroma of hot Samosas wafted in the air. We stopped and followed our nose to the delicious Punjabi samosas. As we were gorging, a couple 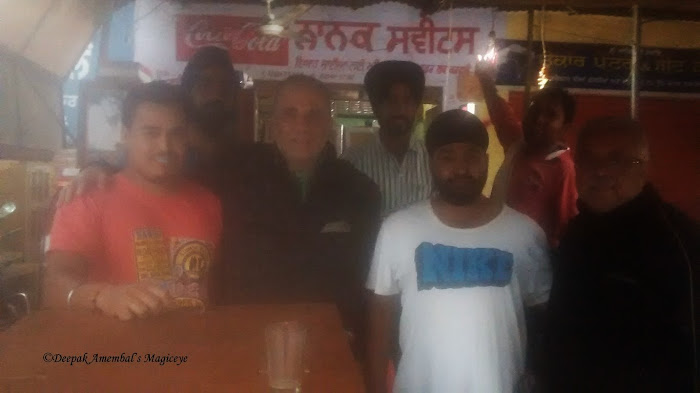 of locals got into conversation with us and were impressed with what we were doing and declared that the samosas and the tea that followed were a treat to us from them! A wonderful entry into Punjab indeed!
We got a room in the Gurudwara premises, had dinner at the langar (blessed food) after paying our respects to the ‘Guru Granth Sahib’ – the holy scriptures of the Sikhs and prayed that rains would stop following us. 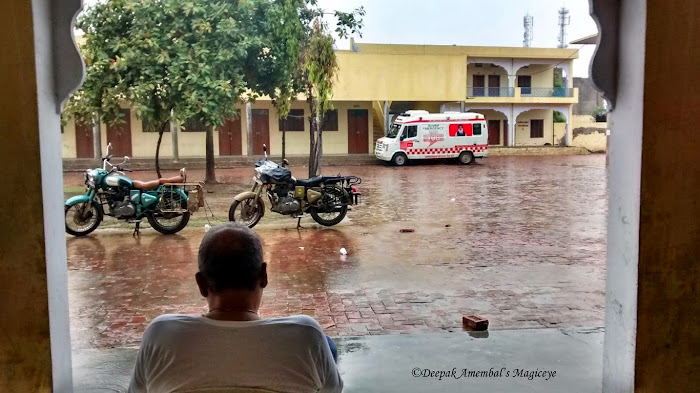 Our prayer seemed to have had some effect as the intensity of the rains had decreased next morning when we set out for Amritsar. It drizzled all the way to Amritsar and after we checked in into the guest room in the holiest of holy Gurudwara premises, it stopped raining. Relieved, we stepped out to 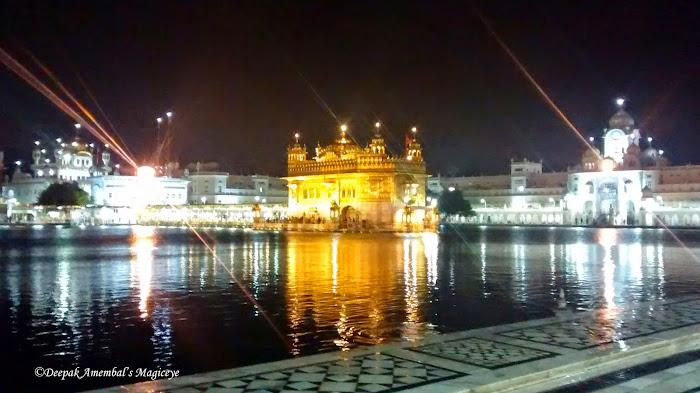 take in the beauty of the Golden Temple. It was really awe inspiring. Next morning too, we circumambulated the Temple, prayed and left for Kapurthala to visit and spend some time with Aditya’s cousin, Dolly Dhindsa and her family.

Have always preferred two wheels over four, as four wheels seemed too balanced for my unbalanced thoughts. And India was just perfect for a two wheeler Odyssey, hence I ventured on my Yezdi 250Classic in 1982 with four friends on their Yezdis for a successful parikrama of India. This was followed by many other rides over the next twenty years after which life took over and had to dump the two wheeler for a four wheeler to continue travelling with the family.
And then it happened. I retired from my day job, the children grew up and got busy with their own lives, wife still had a couple of years before retirement. It did not take long before my passion for two wheel travel took over as the thirst to explore India had not been quenched and Ladakh beckoned. Royal Enfield had launched their 500cc bikes with Unit Construction Engines and Electronic Fuel Injection. I was left with no option but to go ahead and bring home the beauty to accompany on my Indian Odyssey.  So I got the ‘Desert Storm’ a 500cc Classic Royal Enfield. 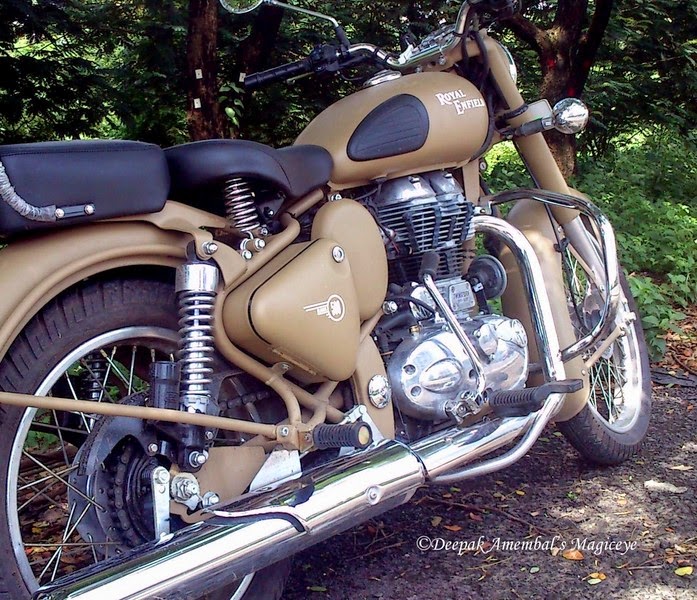 Though basically I prefer riding solo, I joined ‘Bisons Ride Hard’, a motorcycle club exclusive for
Royal Enfield Bullet riders and rode with them to learn the finer nuances of riding the Bullet.
As fate would have it, my first ride with the club happened to be the first club ride for AdityaRaj Kapoor too. The importance of this coincidence will be revealed soon.
I started targeting my goal of being astride on my bike atop the highest motorable road in the world at the Khardungla Pass on my 60th birthday. But fate had other ideas. Just three days before I was supposed to leave for my memory making ride, I could not get out of my bed due to a severe attack of sciatica. I did feel disappointed but did not give up and decided to go for it next year. Visited a couple of doctors (homoeopathic and allopathic), got medicated, practiced yoga and moved towards my rescheduled date with Khardungla pass.
About four months prior to the ride, AdityaRaj Kapoor approached me and expressed his desire to join me. I agreed as he seemed to be a nice positive thinking bloke and would be good company too. It would also relieve some tension for my wife and mother who were quite worried at the prospect of me going alone.
Within a couple of our meetings to plan for the ride, the Mumbai-Khardungla-Mumbai ride turned into an All India ride with a couple of neighbouring countries thrown in for good measure!
At the end of the entire detailed route planning with HV Kumar (the last word on Indian roads), our final route plan involved a ride of 14000kms in 70 days.  His Central Hotel Desk team would track us on GPS and book hotels for us enroute.
Dr.Alap Mehendale, also a prolific rider, who was supposed to join us but dropped out due to professional exigencies, listed and procured all medicines we would possibly need on such a ride with detailed explanation of what to use when and to call him if in doubt.
Our bike technician Vinod, would also be available on phone 24x7 in case of any bike emergencies.
Finally my family physician, Dr. Subodh Kedia, gave me the permission to go ahead after ensuring that my blood pressure and sugar was under control.
And then the day dawned. All my bags were packed and strapped on to the bike. The dream ride would begin soon.
There was a huge gathering at the Bandra Kurla Complex to bid us goodbye on our epic ride 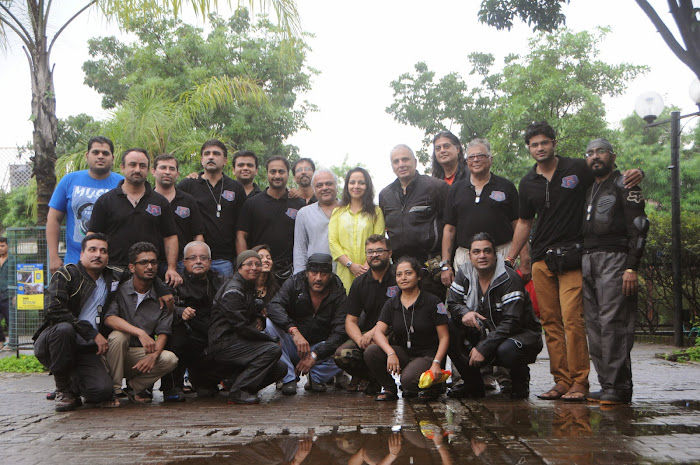 
christened #Indiahai. Bisons Ride Hard members, HVK Forum members, friends and relatives had come over to see us being flagged off by the evergreen Hero Jackie Shroff. 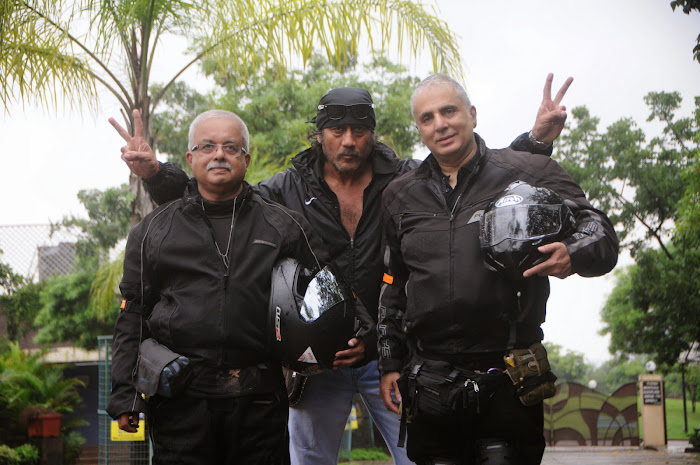 At 1400hrs we were flagged off and we rode all the way to Vapi in pouring rain accompanied by Shree Vinayak Rath (founder President of Bisons Ride Hard) and Ceejay Ferns.
The epic ride had begun!
In Vapi we were hosted for the night by Aditya’s classmate, Mr.Sraw, and his charming wife, who took us out for a wonderful dinner and saw us off the next morning when it rained.
Our next scheduled halt was Kalol.