Was surfing the net for a place to go for our 29th wedding anniversary and stumbled upon IRCTC’s  package for Vaishnodevi which fit the bill perfectly! After conferring/confirming with my better half, booked the package online, all in a matter of an hour! The package included the train fare from Bandra to Jammu, taxi to hotel in Katra (2 nights stay), taxi back Jammu and the train to Bandra!
This package would ensure that we visited Vaishnodevi on the day of our anniversary!
A couple of days prior to the commencement of the journey IRCTC called up to give us our seat/berth numbers.
We boarded the train at Bandra on the 01Jan12 at 08.00am and had an uneventful but wonderful journey to 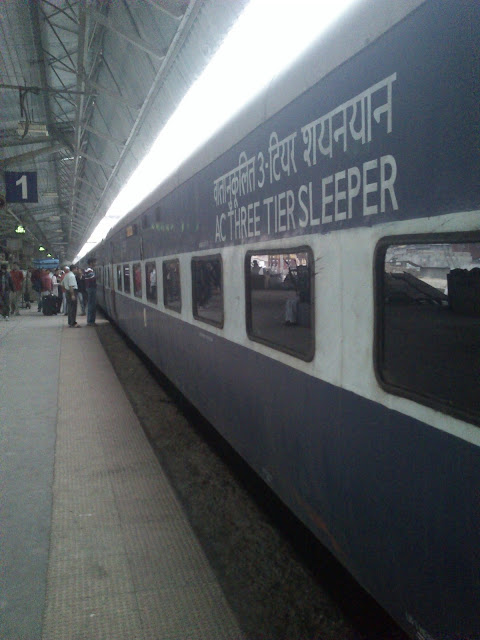 Jammu. As we were nearing Jammu, we got a call from the Hotel informing us of the taxi arranged to transport us to the hotel from Jammu, giving us the taxi number and the taxi driver’s telephone number.
Reached Jammu next evening, and took the cab waiting for us to the hotel in Katra. 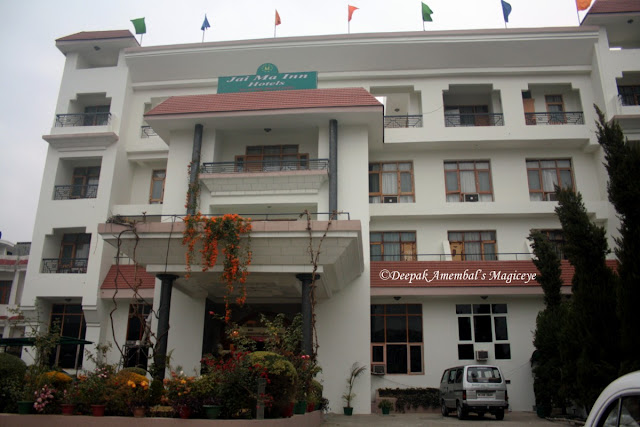 The Jai Maa Inn in Katra where we were booked was a wonderful hotel with comfortable rooms and friendly efficient staff.
While checking in at the hotel, the Receptionist advised us that they would arrange for the Vaishnodevi  Yatra slip which has to be acquired after registration at the Yatri Registration centre (YRC) near the Katra Bus Stand and we could start our Yatra next morning at 08.30am after a good night’s rest and a hearty breakfast. The Hotel car would drop us to the place where our Yatra of 13.5kms climb would begin.
We dined in their restaurant where they served delicious vegetarian meals. 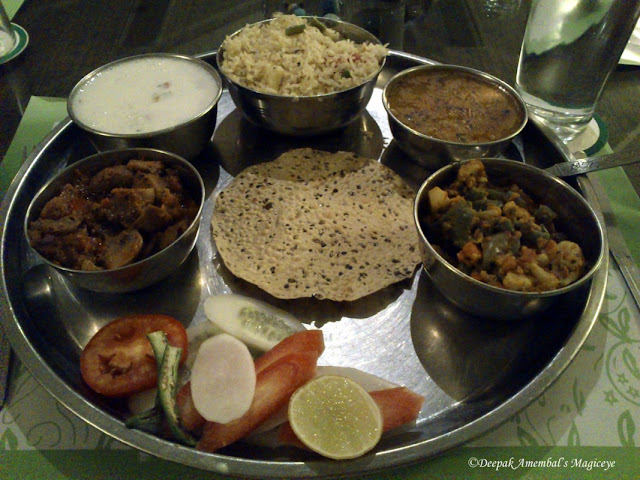 The thali was sumptuous enough to lull us to sleep.
As promised our slip for the Yatra was ready at the Reception in the morning and the car ready to transport us to the Gates of Heaven on our Wedding Anniversary! On the way the driver told us that for the return pick up to the Hotel we would have to call the Hotel once we reach the foothills – way to go!
Though there were multiple types of transportation (helicopter, pony/horse, pithoo, palki, electric car) available to go up, we decided to trek it up and down. And amid cries of ‘Jai Mata Di’ we began our trek up. 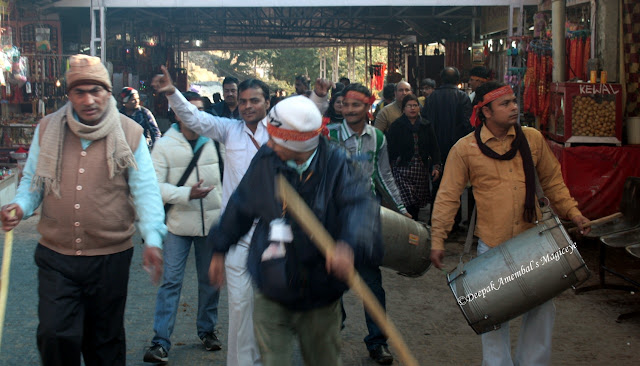 The ambiance all along the route is amazing. There are yatris from the age of 8 to 80+
There is an air of devotion and camaraderie all around. You will find individuals all by themselves or groups doing the yatra. Everybody has a smile on their face. Not a hint of hatred anywhere. It is an amazing experience. 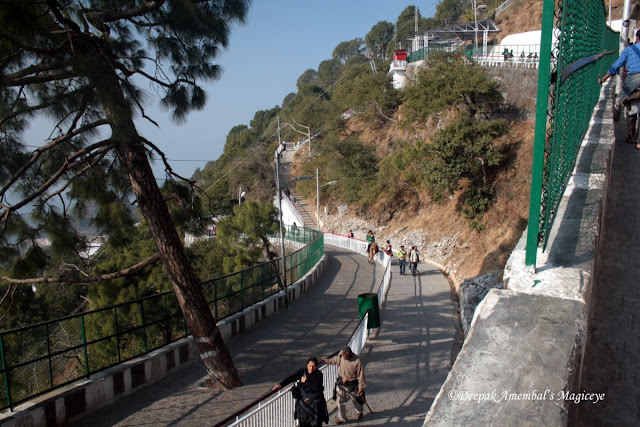 The horses have their own lane to trot on and humans may plod on in their own lane to ensure a smooth flow up and down.
Once you reach the top there is a place called Bhavan where you have to deposit your mobiles, cameras, leather items (bags,shoes,belts,wallets and the like), footwear in lockers manned by the trust there as you are not allowed to have any of these on your person when you enter the temple. All these facilities are free of cost.
The security all along is very tight and you are frisked and bags checked at least at three different points on the way up.
There are clean toilets all along the route and also plenty of places where you can get hot parathas and chai 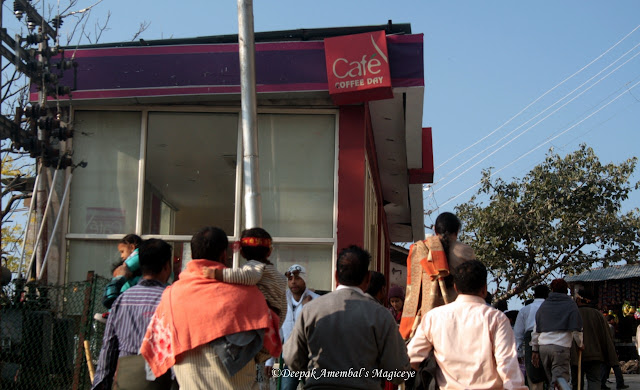 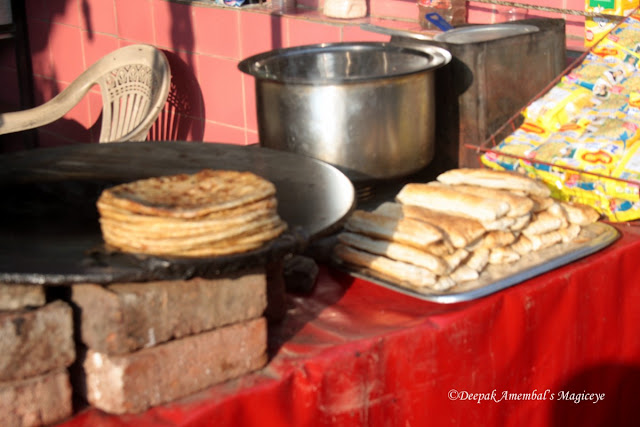 apart from a couple of Cafe Coffee Day outlets. Nescafe and Lipton also have their stalls for tea and coffee.
You can get prepaid rides for horses to take you up and bring you down too. 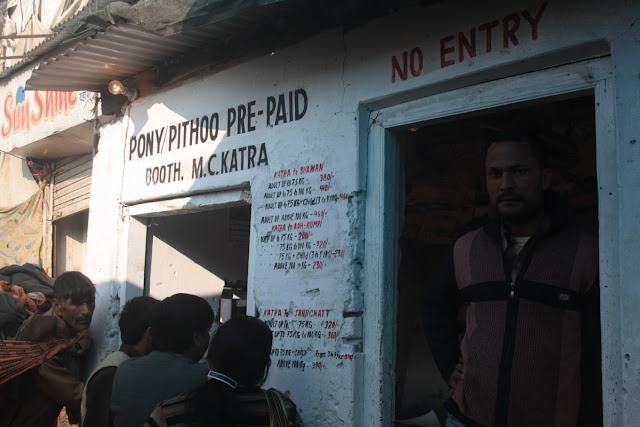 After depositing our bags in the locker provided, we went on to join the queue for darshan of Maa Vaishnodevi. The deity is in a cave and there are people in there to ensure that the queue keeps moving, hence we got our darshan within half an hour. You are not allowed to give any offerings to the deity or to the priest in the cave. There are bins kept outside to place your offerings.
We returned feeling blessed by Maa on our anniversary.
It took us around 6 hours to do the climb up with lot of breaks absorbing the sights along the way and  reached down in just 4!
We were back in our hotel by 8pm, had a wonderful hot water bath, dined and crashed out as the taxi to take us to the Jammu station would arrive to pick us up at 8am. Our return train journey from Jammu would hoot off at 11am and reach us at Bandra at 8pm.
It was a real memorable and blessed anniversary celebration for us!