Had to visit Vittal which is about 40kms south of Mangalore, where I have a retreat to de-stress the urban chaos from my system. The process of stress reduction begins once you get on the road. Generally we always have an early morning start to avoid all the manic traffic jams that plague Mumbai. But this time, due to unavoidable circumstances could start only at half past noon. The city traffic did not disappoint. It took us an hour to navigate just 10kms and another hour to get onto the Mumbai Pune Expressway! It was precisely for this reason that I had decided to take the faster NH4 route which is part of the Golden Quadrilateral rather than the NH17 route via Goa which is more scenic and laid back. 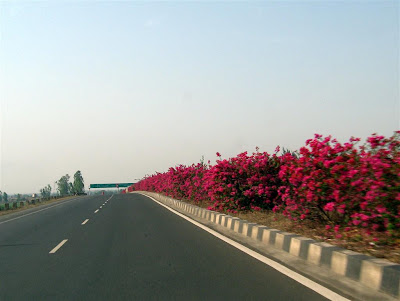 Took me 7hrs to reach Kolhapur, a distance of 390kms. 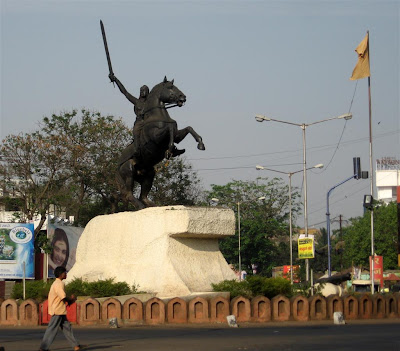 Since I hate driving in the night, decided to spend the night in Kolhapur and next morning left for Shirali which is on the western coast. The drive all the way to Ankola via Hubli and Yellapur was a breeze. From Ankola onwards to Shirali it was the NH17 where the roads were not as broad as NH4 but smooth and very scenic. 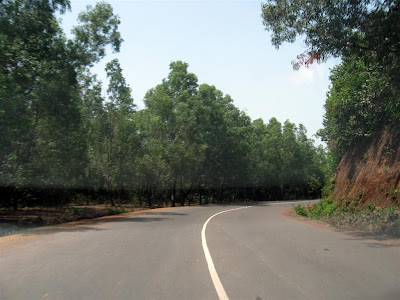 Covered this distance of 450kms in 7hrs.

Shirali is a small village between Bhatkal and Murudeshwar. Shirali is important to Chitrapur Saraswats as it is the location of one of their primary maths. A maţha (also written math, matha or mutt) is a term for monastic and similar religious establishments of the Hindu, Buddhist and Jain traditions. A maţha is usually more formal, hierarchical, and rule-based than an ashram. 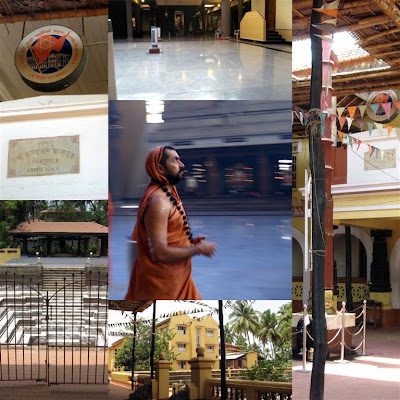 For more details on this math please visit http://www.chitrapurmath.net/our_maths/shirali.asp

Since Murudeshwar was just about 15kms away, went there to see the tallest Shiva idol in the world. 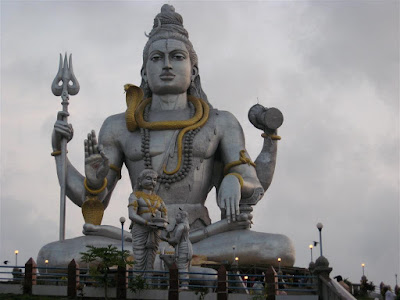 And now there is also the tallest gopuram in the world! Both are awe inspiring. 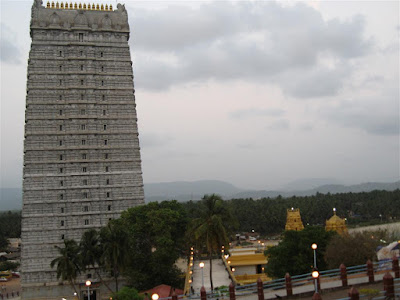 The original Shiva temple also has an amazing story to tell. 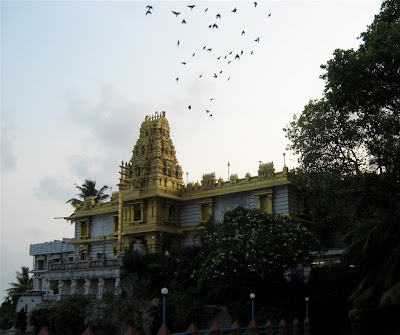 The origin of the name "Murudeshwara" dates to the time of Ramayana. The Hindu gods attained immortality and invincibility by worshipping a divine lingam called the AtmaLinga. The Lanka king Ravana wanted to attain immortality by obtaining the AtmaLinga. Since the AtmaLinga belonged to Lord Shiva, Ravana worshipped Shiva with devotion. Pleased by his prayers, Lord Shiva appeared before him and asked him what he wanted.

Ravana requests the AtmaLinga as his boon. Lord Shiva agreed to give him the boon with a condition that it should never be placed on the ground. If it was, it would get embedded there. Having obtained his boon, Ravana started back on his journey to Lanka.

Ravana used to perform his rituals religiously in the evening. Lord Vishnu and Ganesha decided to exploit his devotion. As Ravana was nearing Gokarna, Lord Vishnu blotted the sun with his Sudarshana Chakra to make it look like evening. A Brahmin boy (Ganesha) approached Ravana, who requested him to hold the Aatmalinga until he performed his rituals.

Ravana returned to find the boy gone and the Aatmalinga on the ground. Lord Vishnu removed his Chakra, and it was daylight again. An angry Ravana tried to uproot the Aatmalinga. He threw away everything covering the Linga, including its cloth, to a placed called Mrideshwara in Kanduka-Giri (Kanduka Hill). Mrideshwara has been renamed to Murudeshwara. 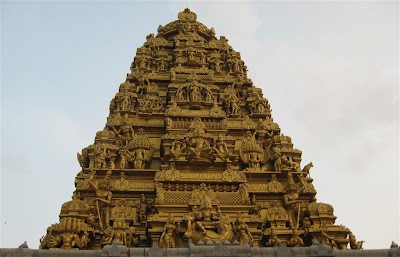 This entire legend has been carved on the temple gopuram.

He called the Linga, Mahabala, as he was unable to lift it, and the Mahabaleshwara temple was built in Gokarna. A small hole in the temple permits devotees to have a glimpse of the top of the Aatmalinga. 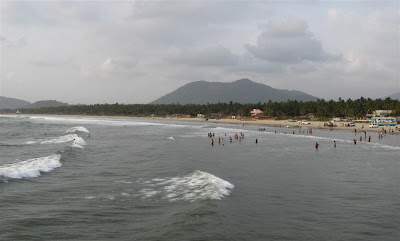 Murudeshwar also has an amazingly beautiful beach which has been developed as a resort with water sports.

R.N.Shetty is the man who has developed this place and responsible for putting it on the tourist map. One cannot escape his name which appears at every nook and corner, on almost every establishment in Murudeshwar!

Having had a wonderful time here, it was time to move on to Udupi. 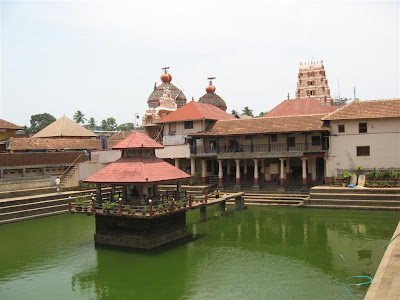 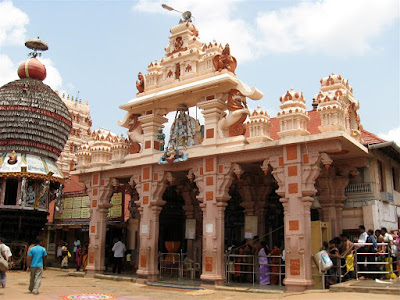 The Shri Krishna temple here also has a fascinating tale to narrate. 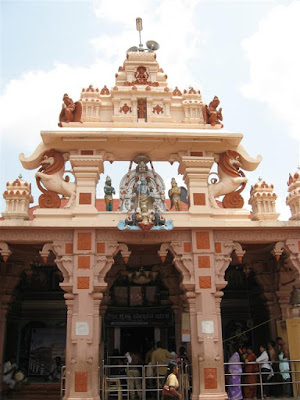 Whenever you enter a temple, you would have the idol facing you. But in this temple Shri Krishna has his back towards you. The reason? Simple. When the temple was built untouchables were not allowed inside the temple. There was this steadfast devotee called Kanaka Dasa, who, since he could not enter the temple, stood outside at the entrance to pray. But he was hounded away. He did the next best thing. He went to the rear of the temple and prayed there. Lord Krishna was touched by this man’s devotion and turned around to face him. And he has remained so ever since. 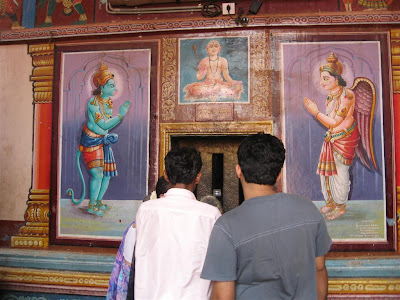 There is a small window built at the rear named ‘Kanaka Dasana Kindi’ (Kanaka Dasa’s window) from where one can get a darshan of the idol. 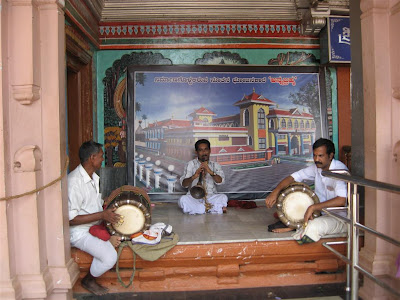 The musicians at the temple. 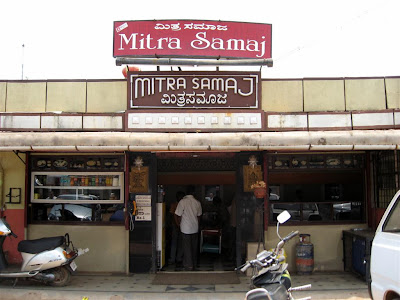 As it was almost brunch time, we went to the much spoken of restaurant ‘Mitra Samaj’ just outside the temple, and satiated our taste buds and hunger with some delicious dosas and wadas washed down by aromatic heady coffee. 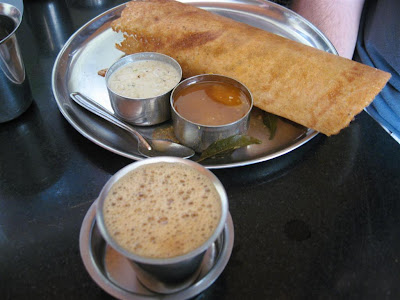 We wanted to try out the famous ‘Gadbad’ a famous ice cream concoction at Diana restaurant. But unfortunately, due to some reason we were told that we would have to wait at least for half an hour to get a table. There were at least 6 vacant tables but ‘No Service’ placards were placed on them. Hence we skipped the ‘gadbad’ and moved on. 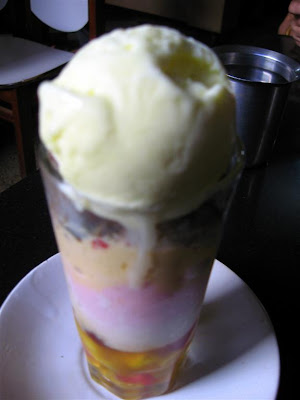 Had it in Puttur (10kms from Vittal) in a restaurant which too is famous for this concoction.

Spent a rejuvenating couple of days in Vittal and returned to Mumbai on the same route but with just a night halt at Kolhapur. 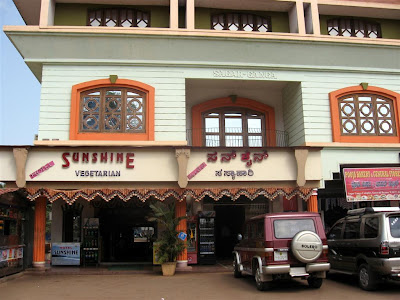 On our return trip we stopped for breakfast in Udupi for some wonderfully awesome Dosas and coffee in ‘Sunshine’ restaurant on the highway. 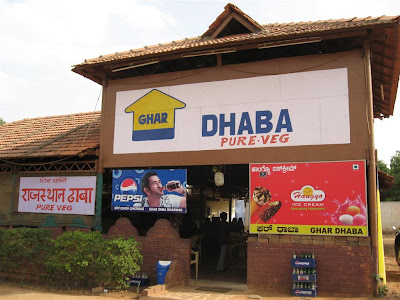 By the time we reached Dharwad we were ready for lunch and stopped at a ‘Rajasthani Dhaba’ for some oily fare. Having rested in Kolhapur for the night, started for Mumbai after a heavy breakfast of ‘Kanda Pohey’, had 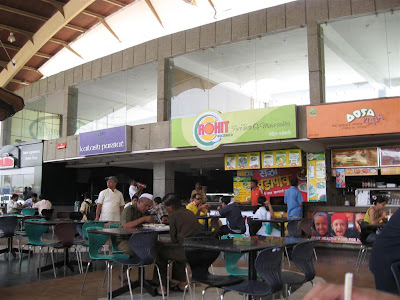 burgers and fries with coke for lunch at McDonalds in Lonavala on the Mumbai Pune expressway, reached Mumbai ready to face the urban chaos till the next de-stressing trip!