A mini Tibet in South India, 2,000 kilometres from Tibet! To know the Tibetan way of life and to see the Golden Temple, the people in South India need not venture very far from their homes. A few kilometres from Madikeri in Karnataka is Bylakuppe where the Indian government had leased 3,000 acres of land to the fleeing Tibetans in 1961. 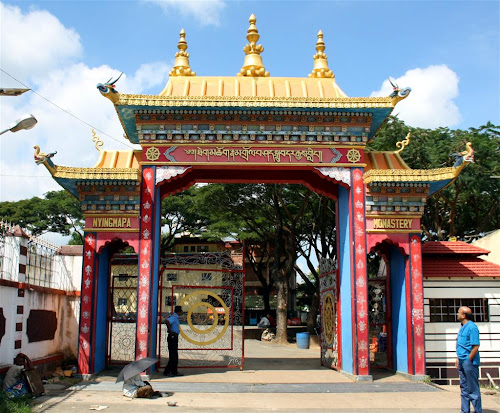 The’ Lugsum Samdupling’ settlement has grown to a veritable township with monasteries, nunneries and cafes and stalls that showcase the Tibetan way of life. Bylakuppe is the largest Tibetan community in exile with about 40,000 people in five settlements containing monasteries, kindergarten to higher level secondary schools, health care clinics, a hospital and a traditional Tibetan medical facility.

As you near the settlement you will find monks in robes zipping past on two wheelers. Makes one wonder – what’s the hurry for the monks?

Ah well, the monks here are well rooted in tradition and well connected with all modern technology too. 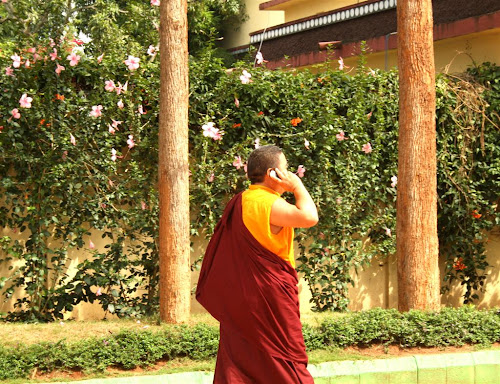 You will see monks chatting away on a mobile phone in one hand and rolling beads on his rosary in another!

All the monks exude a friendliness and warmth towards all visitors and are ready to answer any question that is put to them. 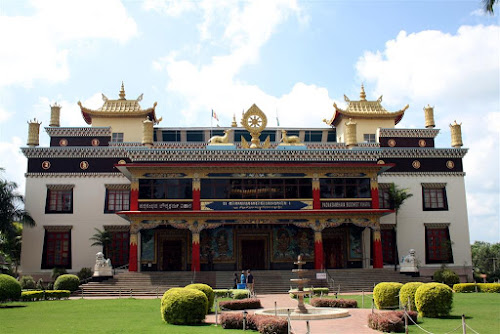 The most visited temple here is Namdroling (The Golden Temple) and the signage is loud and clear. And of course you can spot it from afar. 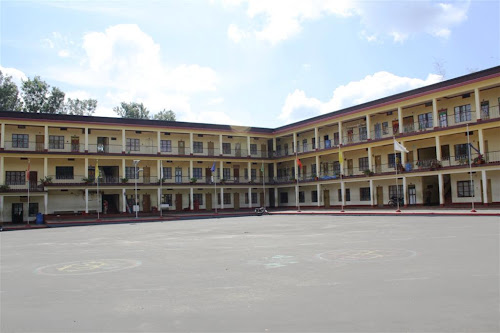 The monastery attached to this temple is considered to be one of the best places for higher learning. This monastery dedicated to the teachings of Palyul Lineage of the Nyingma School of Tibetan Buddhism was established by His Holiness Pema Norbu Rinpoche shortly after he came to India from Tibet. 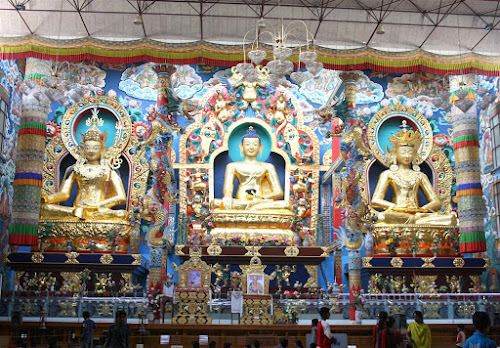 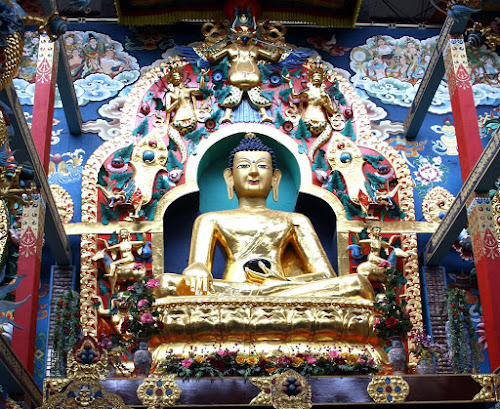 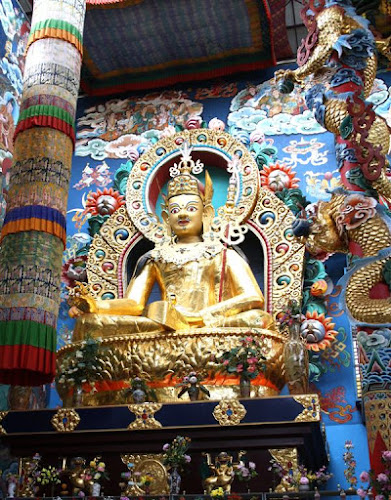 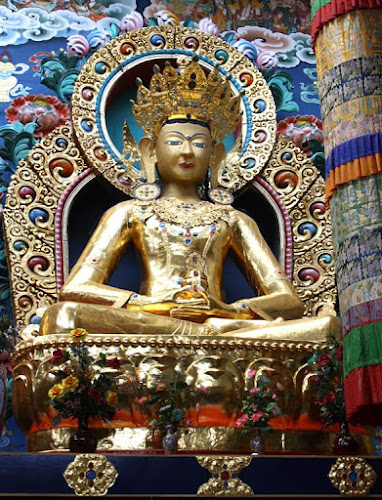 Amitayush (each around 58 feet tall). 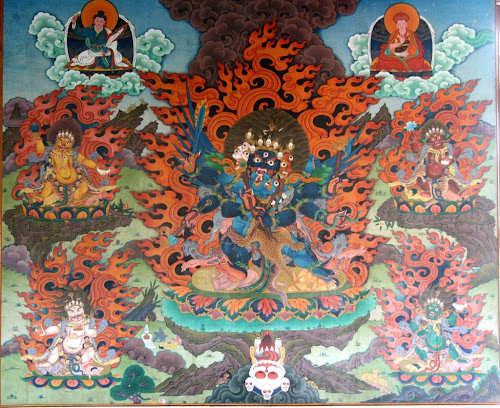 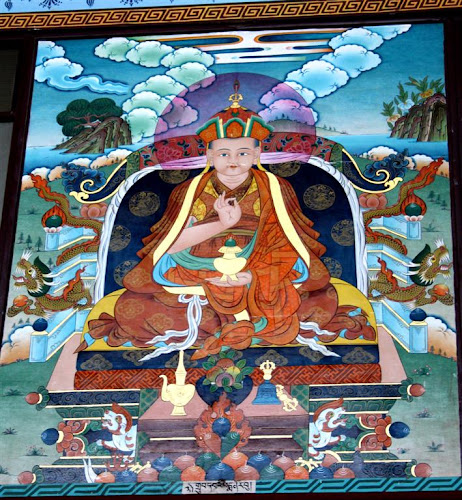 The altar is decorated with flowers, candles and incense.

Dragons twirl up pillars on two sides of the platform. 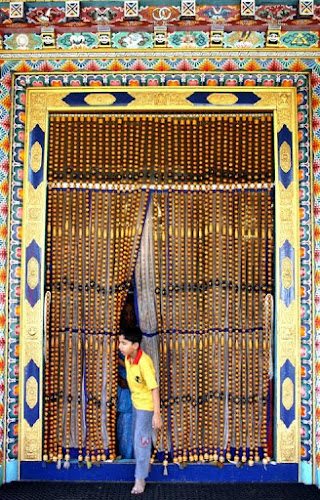 The entrance has a curtain of beads which is the favourite of kids who love going in and out.

We stepped out and were generally looking around when we saw monks streaming into another temple nearby. We followed and were rewarded by a pleasing rendition of chants as they sat down, 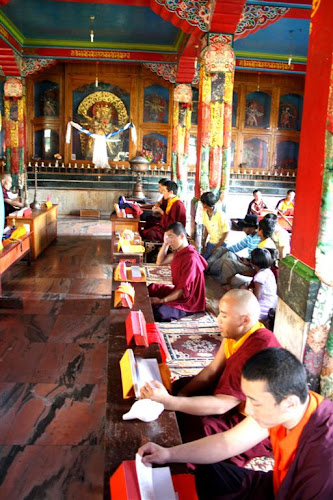 opened the books on the bench in front of them and started praying. 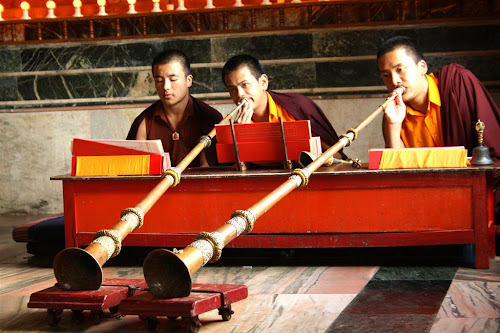 Three of them sat at a bench where there were these long wind instruments which were blown at strategic intervals. 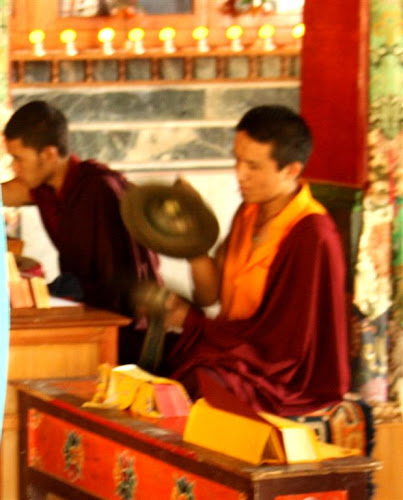 A senior (I think) monk played the cymbals while another 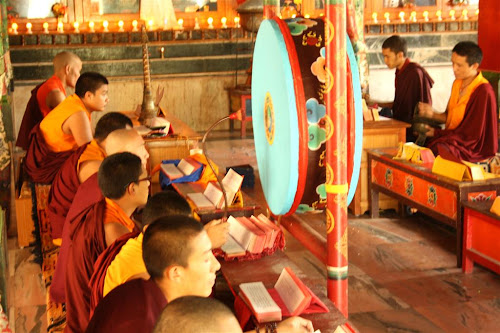 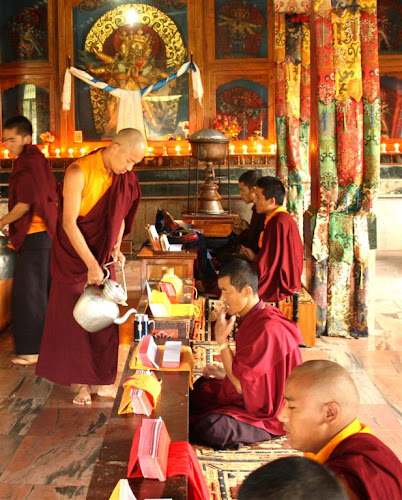 After about five minutes of chanting, a couple of monks walked in with a kettle of water and offered it to a few of the monks who were chanting. 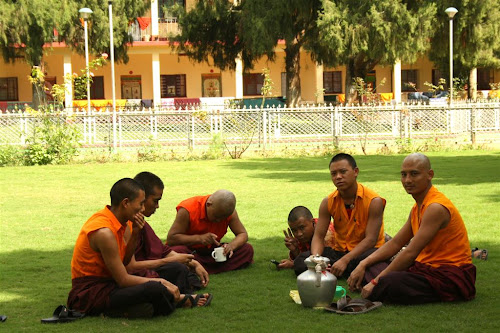 Outside on the lawns there was a group of monks relaxing from whatever they were doing and readily agreed to be photographed. 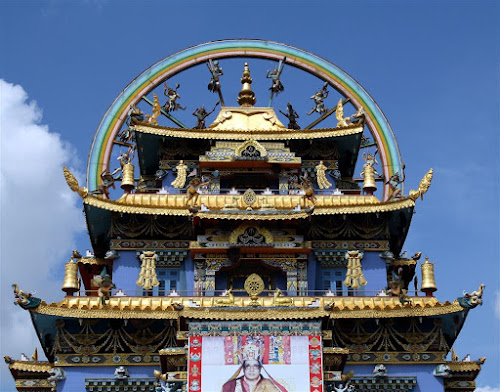 The exterior of the new Zangdokpalri temple looks majestic with a majestic rainbow arch.

We are so used to being told not to photograph the idols in temples, that the ready willingness of the monks to let the idols in their temples being photographed is such a pleasant and welcome surprise.

The nearest town for Bylakuppe is Kushal Nagar. Auto-rickshaw is the best mode for a trip to the Golden Temple from Kushalnagar town. There are frequent buses shuttling between Mysore and Madikeri. Get down at Kushalnagar.

If you are driving from Mysore towards Madikeri by SH 88, Bylakuppe appears a few kilometres ahead of Kushalnagar town. A sign board gives indication towards the left on the road to Madikeri. Kushalnagar is about 30 km (18 miles) from Madikeri town. 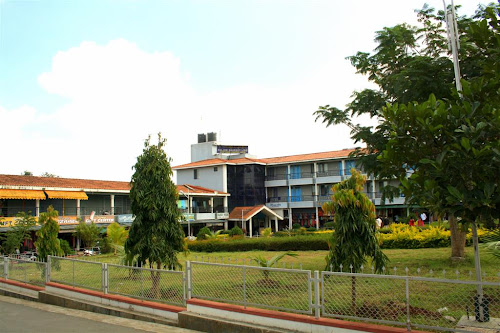 There's a large parking area near the Golden Temple. A shopping arcade next to it houses many curios shops and restaurants. There are not many hotels in Bylakuppe, though there is some guesthouse accommodation as part of the Monastery. Better options for stay are available at Kushalnagar and Madikeri, in that order.