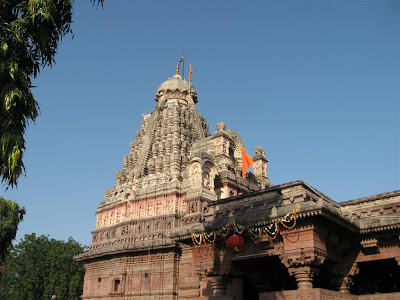 is one of the 12 Jyotirlingas and a must visit for all Lord Shiva devotees. It is located just ½ km from and has some interesting legends. One of them is about how, while playing chess, Lord Shiva lost to Parvati and on a whim, he went south to the . Parvati followed and wooed him resulting in the two deciding to stay there for a few days. 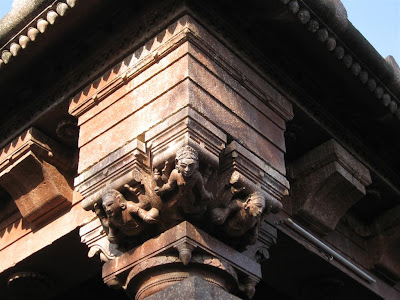 One day Parvati was thirsty and there was no water nearby so Shiva pierced the earth with his trident and created a lake. This lake came to be known as Shivalay. The legend continues with Parvati preparing sindur. Sindur is a paste made from vermilion powder, which married women apply in the hair parting on their forehead, to indicate that they are married. As Parvati was rubbing the vermilion powder and water with her thumb, the vermilion turned into a lingam and a great light appeared in it. Parvati installed the lingam there and called it Grishneshwar, because it was created by “grishna” or friction of her thumb. 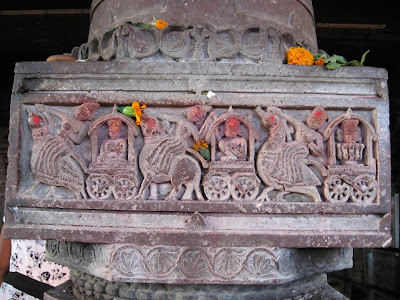 Another legend is from Shivapurana, which narrates a tale about a Brahmin named Sudharm and his wife Sudeha who lived in Devagiri. They lived happily but for the fact that they were childless. Sudeha blamed herself for this and to ensure that her husband’s lineage continued, she got her sister Ghushma married to Sudharm. She also instructed Ghushma to make 101 lingams, worship them at Grishneshwar and then immerse them in the . Soon, with the blessings of Shiva, a boy was born to Ghushma after which Sudeha felt neglected, resulting in jealousy and a murder most foul. She killed Ghushma’s son and threw him in the lake. When his wife awoke, she saw that instead of her husband there was a blood stained sheet and in a panic went and informed Ghushma, her mother in law, who was busy praying and so did not respond and continued with her daily rituals. When she went to immerse the lingams, she saw her son emerge from the lake. Then Shiva appeared before her and told her that Sudeha had killed her son. Ghushma requested Shiva to forgive her sister. Pleased with her devotion and generosity, Shiva offered her a boon. Ghushma requested Shiva to eternally reside there so that she could worship him up close. Shiva agreed and decreed that the shrine be named Ghushmeshwar. Hence, the temple is known by both the names ‘Grishneshwar’ and ‘Ghushmeshwar’. 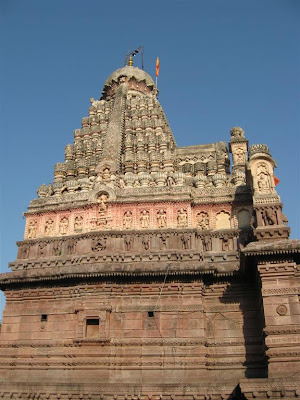 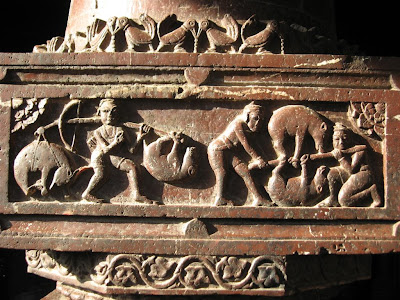 The temple looks as if it is built with redstone. As per the ‘Archaeological Survey of India’, quote, “The Ellora caves are hewn out of the volcanic basaltic formation of , known as ‘Deccan Trap’, the term trap being of Scandinavian origin representing the step like formation of the volcanic deposits. These channels, due to overheating, have a characteristic brownish red colour. Similar rock was used in the construction of the nearby and also utilised for the flooring of the pathways at Bibi-ka-Maqbara.” Unquote. 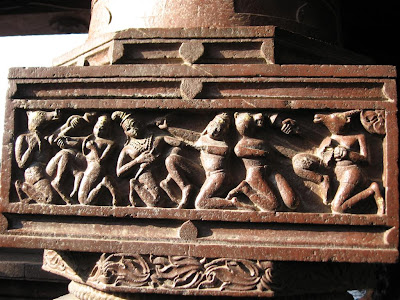 There are carvings all over the temple and the pillars within. 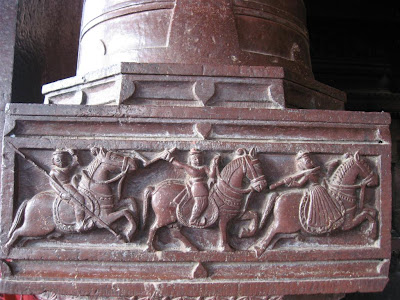 To enter the sanctum sanctorum the males have to be topless. Photography in the sanctum is prohibited. 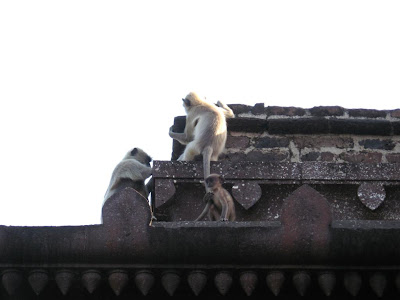 The langurs have a free run outside the temple. Was fun watching and clicking them. 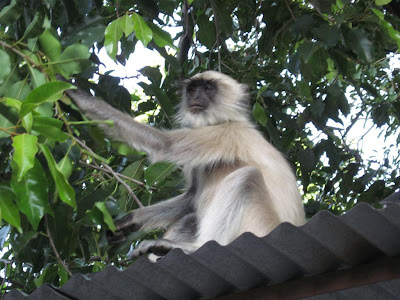 The Grishneshwar temple was re-constructed by Maloji Raje Bhosale of Verul, (grandfather of Chhatrapati Shivaji Maharaj) in the 16th century. His Samadhi is outside the temple.