Taj Mahal, the pinnacle of Mughal architecture, was built by the Mughal emperor Shah Jahan (1628-1658), in the memory of his queen Arjumand Bano Begum. Inspired by this wonder, Emperor Shah Jahan’s grandson Prince Azam Shah, built a similar mausoleum near Aurangabad, in memory of his mother, between 1651 and 1661 A.D. 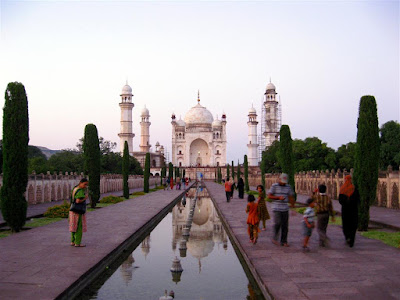 Bibi-ka-maqbara, as it is called, is a beautiful mausoleum of Rabia-ul-Daurani alias Dilras Banu Begum, the wife of the Mughal Emperor Aurangzeb (1658-1707 A.D.). An inscription on the main entrance door states that it was designed and erected by Ata-ullah, an architect and Hanspat Rai, an engineer. Though Azam Shah wanted to construct the monument wholly in marble, it was not to be as his father Aurangzeb was not in favor of building a monument as lavish as the Taj and even blocked the transportation of marble that was being procured from the mines near Jaipur. Somehow, Azam Shah prevailed upon his father who eventually relented and ultimately the "Taj of Deccan" was constructed, though a poor imitation, hence also known as the poor man’s Taj! 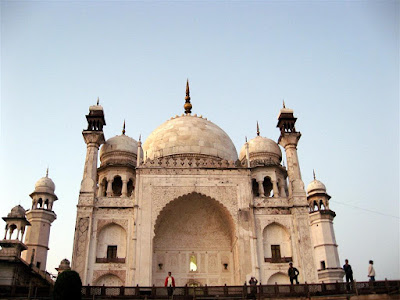 It is built on a high square platform with four minarets at its corners, and is encased with marble up to the dado level. Above the dado level, it is constructed of basaltic trap up to the base of dome, which is built of marble. A fine plaster covers the basaltic trap, given a fine polished finish, and adorned with fine stucco decorations. 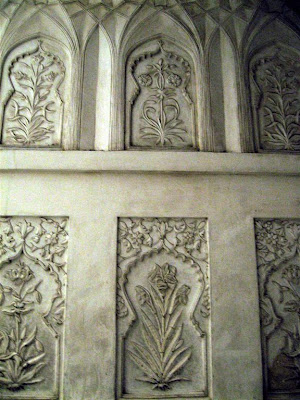 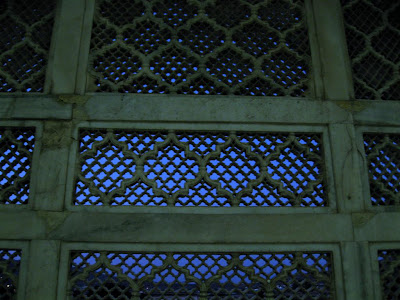 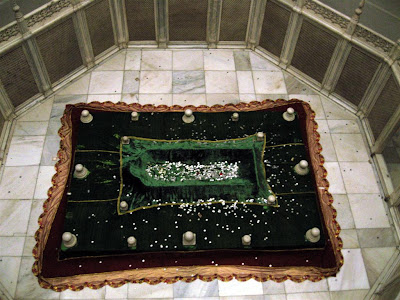 The mortal remains of Rabia-ul-Daurani are placed below the ground level surrounded by an octagonal marble screen with exquisite designs, which can be approached by descending a flight of steps. The mausoleum is crowned by a dome pierced with trellis works and accompanying panels decorated with floral designs. 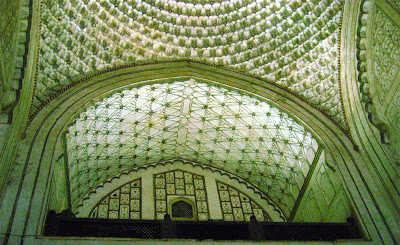 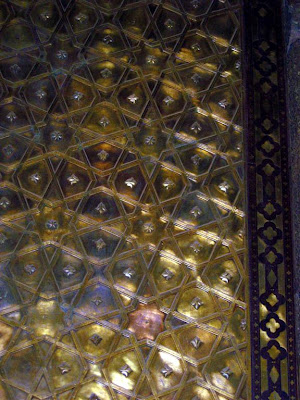 One enters the mausoleum through the main entrance gate on its south, which has excellent foliage designs on brass plates that cover the wooden doors. A screened pathway that leads to the mausoleum from the entrance has a series of fountains at its centre, which adds to the serene ambiance. As you approach the monument, you notice that there is only one mosque on the main plinth of the Maqbara as against the two mosques on either side of the Taj, giving it symmetry. Apparently, this mosque was a later addition. Legend has it that in 1803, Nizam Sikander Jahan was so captivated by the Maqbara that when Aurangabad and the Marathwada area were annexed to his kingdom he had planned to shift the Maqbara to his capital, Hyderabad. He even ordered the dismantling of the monument, slab by slab, to facilitate the smooth transfer. But then, he had a premonition of some disaster, which would befall him, were he to harm the existing structure. Hence, he stopped the work and got the mosque built as penance. According to the "Tawarikh Namah" of Ghulam Mustafa, the cost of construction of the mausoleum was Rs.6,68,203-7 (Rupees Six Lakh, Sixty Eight Thousand, Two Hundred and Three & Seven Annas) in 1651-1661 A.D. It is now a protected monument under The Archaeological Survey of India and a must see when in Aurangabad and is situated just around five kms from the city. Aurangabad is around 375kms from Mumbai.
Posted by magiceye at 10:04 AM