We had started our journey towards Siliguri on a very pleasant morning. The weather was cool and the roads were good. Perfect for a lovely ride down the mountain.
Everything seemed perfect, actually too perfect. And sure enough my bike just died as we neared the Teesta river bridge. I cruised it on a silent mode to the edge of the road to check what the problem could be. Aditya had gone ahead but I was not worried as I knew that in a short while he would either ride back or stop and call me to know what it was that was keeping me back.
I tried starting but no go. The bike did not show any sign of life or coming back to life. So I called our trusted mechanic Vinod back in Mumbai to ask what the problem could be. He asked me to carry out certain procedures and after listening to the results he declared that it was a fuel pump problem which would have to be replaced.
In the meantime, Aditya called, I apprised him of the situation and within minutes he was with me. He checked the bike for whatever faults that he thought it might have suffered and then decided to go ahead and try to get a mechanic. And he did return with a mechanic who apparently had his workshop under the Teesta river bridge. The mechanic went through the paces of checking and he too arrived at the same decision as my Mumbai mechanic – Fuel pump needs to be replaced. And this being an expensive part would be available only at the Royal Enfield dealer’s outlet in Siliguri which was another 30kms away. Seeing our plight he said that he would organise the van to carry my bike to Siliguri.
We had time till the van was organised, so Aditya called up the Royal Enfield dealer who reluctantly agreed to source the part for us. It sounded a bit dicey. As luck would have it, just a couple of days back a biker friend, Sakshar, had called and given me a couple of contact names and numbers who were prominent members of the ‘Teesta Thumpers’ the Royal Enfield motorcycle club from Siliguri. So I called them up and they put my mind at ease and said they would connect with the dealer and ensure we got the best attention. Thank you Anupam and Saura for responding to our SOS and assisting us move on.
The van arrived, bike loaded and we were on our way to Siliguri and by the time we reached it was early evening. Aditya had gone ahead to ensure immediate action, hence, as soon as we reached my bike was taken in for necessary repairs. After a check up by their seniormost technician it was firmly established that the fuel pump needed replacement. And they got onto the job at hand while four riders of Teesta Thumpers motorcycle club arrived to ensure we and our bikes were attended to!
By late evening both our bikes were ready for the ride ahead to Phuentsholing but as we, as a  rule, did not ride at night, were escorted to the hotel by our rider friends so that we could have a good night’s rest before riding on to Bhutan.
Next afternoon we reached Phuentsholing, the border town of Bhutan, where we had to get our permits for ourselves and our bikes to ride around in Bhutan and this took some time so we stayed over in Phuentsholing for the night with plans to ride to Paro the next day. 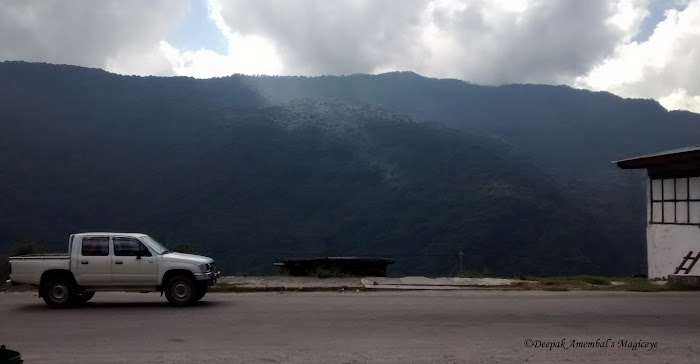 The road to Paro was beautiful, winding through the mountains, with fog reducing visibility at places. 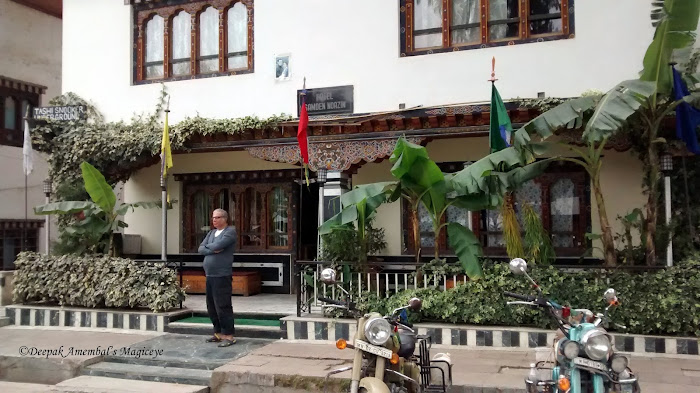 We reached Paro early evening and checked into a beautiful hotel. Everything in Paro is quaintly beautiful. After arranging for a taxi to take us to the base of the ‘Tiger’s nest’ hill, we went for a walk around town.
Paro is a very pretty town with lot of cafes and restaurants. The discipline there among the drivers is amazing. Nobody seems to drive above 50km per hour. Everything is very sedate. Nobody is shouting or fighting. There is a general sense of peace all round. If you do hear some raised voices or laughter you can rest assured it is the tourists. The streets are clean and all pedestrians are on the footpath.
Next morning, surprisingly the taxi arrived a bit late. Somehow I had thought punctuality would be a virtue here but as we found out during our stay there, it is not.
The taxi ambled along, as was the general trend on the roads, to the base of ‘Paro Taktsang’ where he would drop us and then pick us up again once we were back from the visit. ‘Paro Taktsang’ means ‘Tiger’s lair’ and the legend is that Padmasambhava flew in from Tibet on the back of a tigress from Tibet and was responsible for introducing Buddhism to Bhutan. 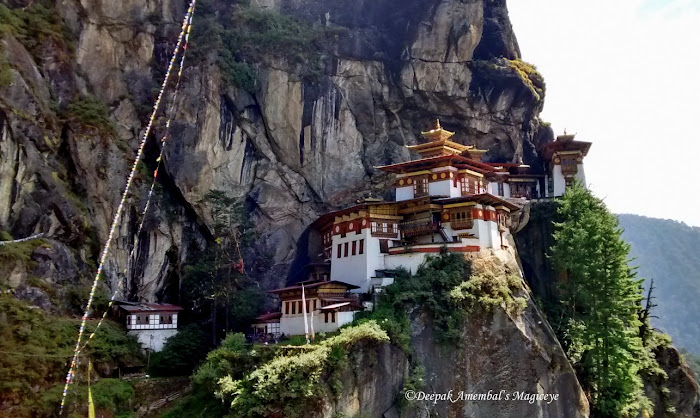 Now there is a monastery that is built on a cliff 3120 metres above sea level and to visit it one has to climb all the way up there. The path 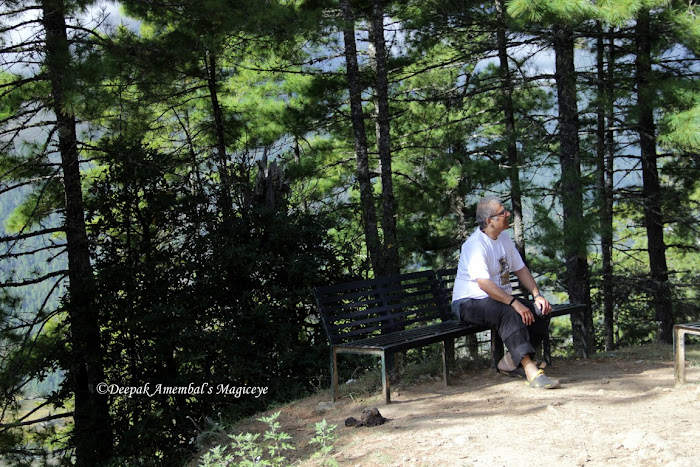 to the top is well laid out and though tough there are places to rest with availability of drinking water for both men and horses (used to carry humans and/or cargo). We climbed all the way up, prayed for a successful ride and walked down. The views all along were amazing.
The waiting taxi was a welcome relief from all the exercise and we returned to the hotel for yet another well deserved restful night.