ASHTAVINAYAK and some…. Ashtavinayak is a group of eight Ganesh temples in Maharashtra that are considered very important by the devotees of Lord Ganesh. These eight temples house the ‘swayambhu’ or ‘self-formed’ idols of the Lord Ganesh, hence the importance and high reverence attached to this octet. A pilgrimage to the Ashtavinayak is considered to be a milestone in the devotee’s life. The eight temples/idols of the Ashtavinayak in their religious sequence are: 1. The Moreshwar Temple at Moregaon 2. The Siddhivinayak Temple at Siddhatek 3. The Ballaleshwar Temple at Pali 4. The Varadavinayak Temple at Mahad 5. The Chintamani Temple at Theur 6. The Girijatamak Temple at Lenyandri 7. The Vighnahar Temple at Ozar 8. The Mahaganapati Temple at Ranjangaon Each of these temples has its own individual mythology and history the details of which can be found at http://www.ashtavinayaktemples.com/ Since we set out from Mumbai, and most of the temples are around Pune, we did not abide by the suggested religious sequence of visiting the temples but planned our own. On day 1 Mumbai – Pali (112kms) We headed our car onto the Mumbai Goa highway (NH17) for Pali. The road was excellent right up to Nagothane from where we had to turn into a side road for Pali. The distance from the turnoff up to Pali, which is about 15kms, brings you down to earth after a smooth ride. On reaching Pali we saw a few ‘Free Parking’ boards displayed but all those were empty except for the one nearest to the temple, where there were just a couple of cars parked. Having parked, we set out to visit the temple when we were accosted at the entrance of the parking lot by a mother-daughter combo selling ‘puja thali’ (offerings for the puja). Apparently the parking was free if we bought the offerings from them! Or else we had to pay Rs.10/-, which anyway was the cost of the ‘puja thali’. So we did the smart thing, bought the offerings and proceeded towards the temple. No photography of the idol is allowed in the sanctum sanctorum so had to be happy taking a snapshot of the temple from outside. 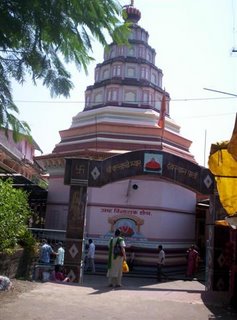 The Ballaleshwar Temple at Pali.
Our next destination was The Varadavinayak Temple at Mahad at a distance of 44kms from Pali. We had to head towards Khopoli and on our way out of the parking lot we spoke to a driver just driving in. He was apparently coming in from Mahad and gave us very scary stories of the road conditions. But we moved on regardless and were pleasantly surprised to find that maybe only a couple of kilometers of the 44kms to be traversed were bad, well awful. It took us about an hour to cover this distance. The parking here is free – no strings or offerings attached. You can see the temple premises from the parking spot, which is on one side of a lovely pond. 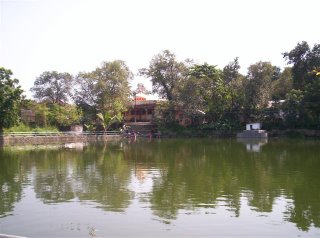 The temple view from parking spot. 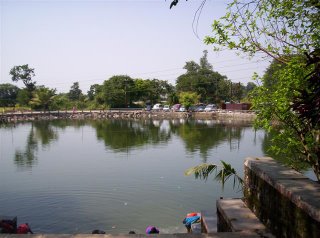 The view from the temple of parking spot.
When we were standing to pray, we were told that we could actually enter the Garbagriha (sanctum sanctorum) and offer our prayers, but no photography please! So after offering our prayers, when we came out, we were directed to a spot where the ‘mouse’, which is considered to be the vehicle of Lord Ganesh, was installed. 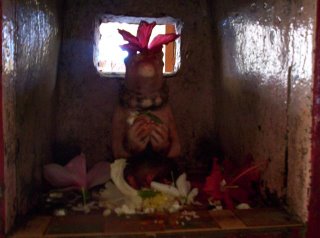 We could stand behind this mouse and take photographs of the idol. 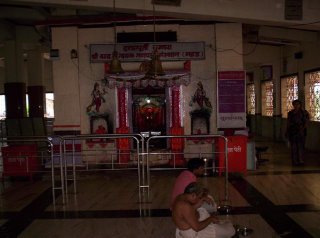 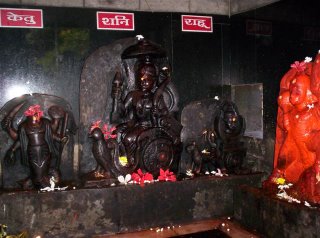 Shani, Ketu and Rahu along with Hanuman.
The facilities for the visiting devotees are good here. There are clean washrooms (pay per use) and place to rest, eat and pray or meditate. The overall ambience is very pleasant. Now it was time to have some lunch and head for Pune. We got onto the expressway via Khalapur and raced to Kailas Parbat – the lovely vegetarian restaurant in Lonavala. After a satisfying meal we left for Pune. The distance to be covered from Mahad was approximately 110kms. 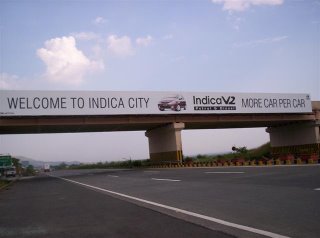 In Pune we checked in at Hotel Sargam – a fine new hotel in Yerawada. The rooms, food and the service were very good. Did some more temple visiting in Pune like visiting the 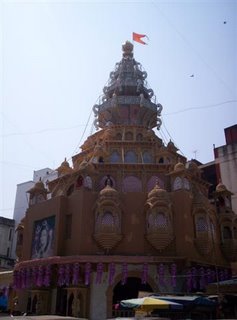 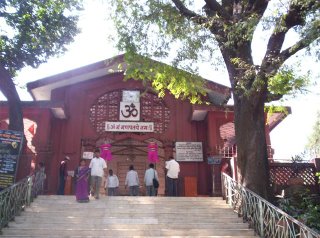 and the Ganpati temple in Saras Baug.
And then of course how can one leave Pune without visiting the famous ‘Chitale Bandhu’ 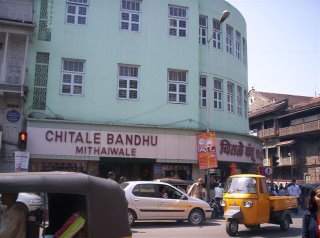 and buying their famous savories and sweets! 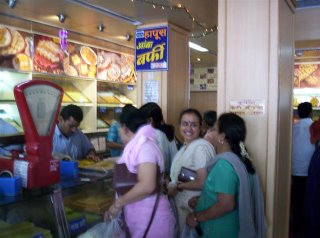 On Day 2 Onwards to The Chintamani Temple at Theur at a distance of about 25kms from Pune on the Pune Sholapur highway. A smooth ride all the way. We did the distance in about 40minutes. The parking is free here though unfortunately the restroom/toilet facilities here are pathetic. But the best part is that photography of the idol is allowed though we are not allowed in the 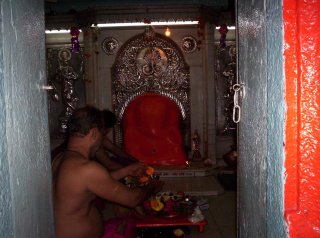 Garbagriha unless you have paid to do any special Puja. Next destination on the route was The Moreshwar Temple at Moregaon at a distance of about 65kms from Theur. The ride again was a smooth one and we did it in an hour and 15minutes. About 100metres from the temple premises is the entry for vehicles where there stands the toll parking charges collector. There is no ‘Parking lot’ as such but park wherever you find space between shops in the market place outside the temple. In the temple no entry into the Garbagriha and no photography please. 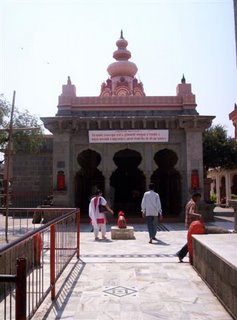 On the way out from the temple I asked an old hawker if any clean toilets around. His reply, “Of course there are clean toilets. Not like in Mumbai!” And truly the pay per use toilets were clean and odorless. The Siddhivinayak Temple at Siddhatek at a distance of about 70kms from Morgaon was next on the list. This again is off the Pune Sholapur highway and a smooth ride. Previously one had to cross the Bhima river by boat to reach Siddhatek from Shirapur but now the bridge is almost ready though the ramp leading on and off is still to be paved. But traffic is allowed and if one has a low chassis vehicle you have to be careful, otherwise no serious problems. Here too entry into the Garbagriha and photography of the idol is prohibited. Plenty of parking space for a fee of Rs.10/-. No decent facilities for meals or washrooms. 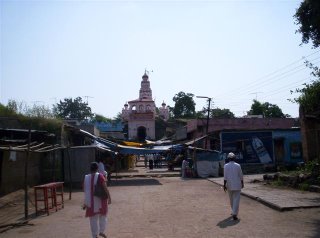 Generally seems very crowded once you enter the premises. Made a quick exit after offering our prayers. The Mahaganapati Temple at Ranjangaon at a distance of 100kms from Siddhatek beckoned and off we went on the Pune Nagpur highway. The ride was smooth for most of the way except for a couple of real awful patches that rattled the car and occupants for about 15kms. Took us about 2 and half hours to reach. This is the most organized in terms of parking (free); washroom facilities and a decent restaurant where one can have a reasonably filling snack too. This temple is on the highway so one of the most accessible hence popular, from Pune. No entry in the Garbagriha but photographs of the idol allowed on payment of Rs.25/-. 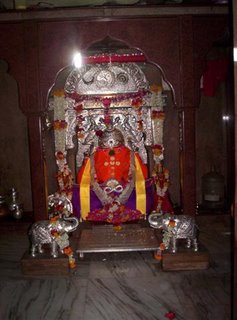 Having offered our prayers to the Lord and snacked on the local Batata Wadas, we set back for Pune, which was about 50kms from Ranjangaon. The ride back was a very smooth one and took us just about an hour. 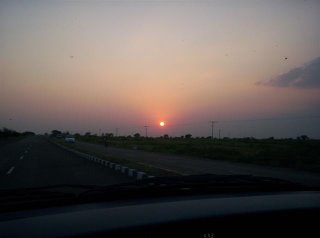 The sunset enroute added to the pleasure.
On day 3 We bid Pune goodbye at 0700hrs for The Girijatamak Temple at Lenyandri. The distance to be covered was 100kms from Pune via Junner. The road was good except for about 5kms from Junner. It took us about 3hours to reach, which includes time taken for typical Maharashtrian breakfast of ‘Kanda Pohe’ at Narayangaon. Girijatmaj Vinayak's temple is in the 8th of 18 Buddhist caves known as Ganesh Gufa, or "Ganesh caves." The parking lot is at the base and the fee is Rs.10/-. 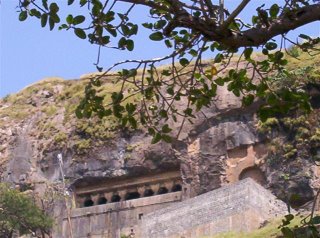 The entire temple is carved out of a single stone and faces south. It is located on a mountain, and one has to climb 207 steps to reach the top. We took about 30minutes to climb and 20minutes to get down. 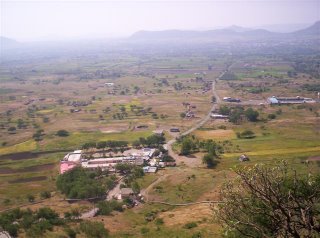 In front of the main mandir there is a large hall, approximately 53 by 51 feet. 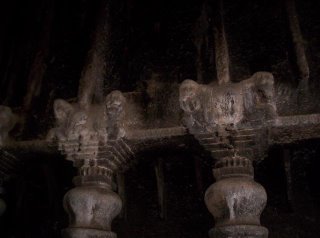 The main mandir hall is 7 feet high and has 6 stone pillars with cows, elephants and other animals carved on them. 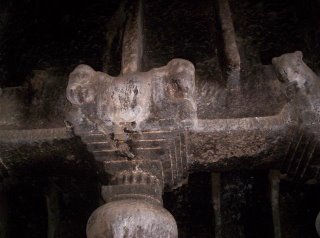 You may photograph the idol to your hearts content! No questions asked! 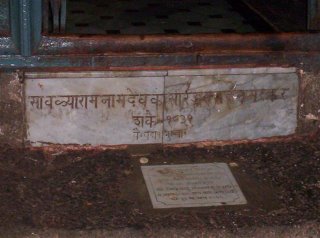 At the door of the temple's sanctum sanctorum was this engraved marble. 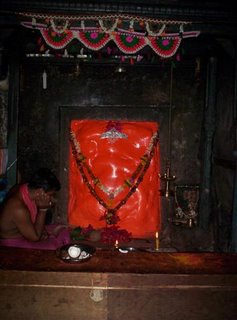 After descending we had a refreshing glass of sugarcane juice and then off we went to The Vighnahar Temple at Ozar, a distance of 30minutes of bone rattling 15kms. At Ozar, it is pay Rs.10/- and park in a huge parking lot. The facilities for devotees here are very good. For a small sum you can have meals at the temple and there are rooms and dormitory available if you wish to stay over. You may photograph the idol but at a price of Rs.21/-. 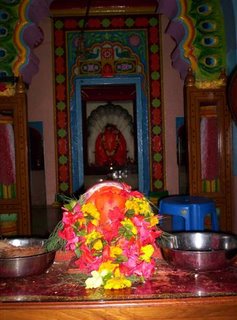 We were in time for the afternoon puja and felt blessed, as this was the last of the Ashtavinayak temple to be visited. Now it was the home run back to Mumbai but decided to take a break at Malshej, 40kms of ‘under reconstruction’ road from Ozar, where we spent a wonderful communing with nature at the MTDC resort. The Malshej experience may be experienced at http://photings.blogspot.com/2006/10/travelogue-malshej.html The total distance covered was 850kms of which around 10% of the roads were bad, otherwise it was a superb driving experience. .
Posted by magiceye at 11:07 AM